The Mohammed bin Rashid University of Medicine and Health Sciences announced research studies that explain the characteristics of the emerging corona virus through careful monitoring of viral genome changes, so that the team of researchers at the university continues to consolidate their pivotal role in supporting Dubai’s efforts to confront the pandemic. 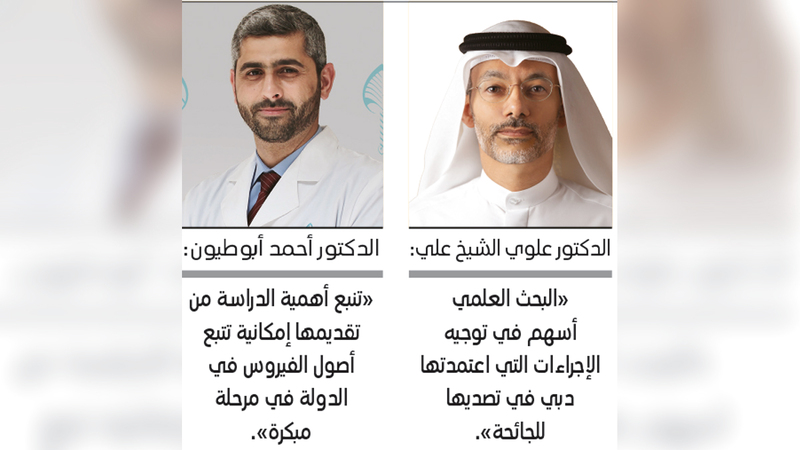 The Mohammed bin Rashid University of Medicine and Health Sciences announced research studies that explain the characteristics of the emerging corona virus through careful monitoring of viral genome changes, so that the university's research team continues to consolidate their pivotal role in supporting Dubai's efforts to confront the pandemic.

The university said in a statement yesterday: “The serious cooperation with researchers in the Dubai Health Authority and the Genome Center at Al Jalila Children’s Specialist Hospital has resulted in an understanding of the mechanism of the virus mutation when it is transmitted from one person to another within weeks and months, which allowed the detection and tracking of the genetic fingerprint of the virus, to reveal its origin.” The methods of infection and possible mutations, and the studies were a contributing factor in drawing Dubai’s evidence-based approach to addressing the pandemic at the local level.”

She added, "The team of researchers also succeeded in developing an effective, cost-effective and scalable method for monitoring the genetic changes of the virus, to allow detecting its origin and distinguishing transmission routes with great accuracy in Dubai and the UAE, as well as drawing a spatiotemporal map for the early stage of the spread of (Covid-19)," It resulted in the detection of major geographical foci at the beginning of the pandemic.”

The study showed that the combination of patient-related factors (such as age, gender, and chronic diseases), with specific mutations of the virus, may increase the severity of infection. In addition, the research team was able to discover a distinct phenotype of the virus in patients with severe symptoms;

This allows them to predict the severity of their disease, and enables healthcare professionals to choose the most effective level of treatment.

The results of the research that formed the unique study were published in several prestigious and refereed scientific journals, making it a valuable reference for the medical and academic community.

The study shared the complete genome sequence of the virus from Dubai with the international scientific community, to provide critical support to the world in confronting “Covid-19”, and to provide important data on the spread of the virus around the world in general, and in Europe in particular.

The Deputy Director-General of the Dubai Health Authority, Chairman of the Scientific Advisory Committee at the Control and Control Center to combat the “Corona” virus in Dubai, and a member of the University’s Board of Trustees, Dr. Alawi Al Sheikh Ali, said: “Scientific research represents a valuable reference that contributed to raising awareness and directing the measures adopted by Dubai in addressing it. for the pandemic.”

In turn, the Director of the Genome Center at Al Jalila Children’s Specialist Hospital, Associate Professor of Genetics at the University, Dr. Ahmed Abutyun, said: “The importance of the study stems from providing the possibility to trace the origins of the virus in the country at an early stage, identifying the most dangerous areas, as well as providing us with vital data about the virus. The scale, severity and scope of the response to the (Covid-19) crisis.

He added: "Given the geographical location and the important role that Dubai plays as a bridge between East and West, the results of our study also contributed to directing and upgrading the strategies used in the first lines of defense against (Covid-19)."