Chinese leaders once again leveled strong criticism of the online gaming industry, accusing the industry of spreading “spiritual opium” among Chinese youth and creating addicts who fail academically and in other areas. The Economic Information Daily, a media outlet of the party, reported: 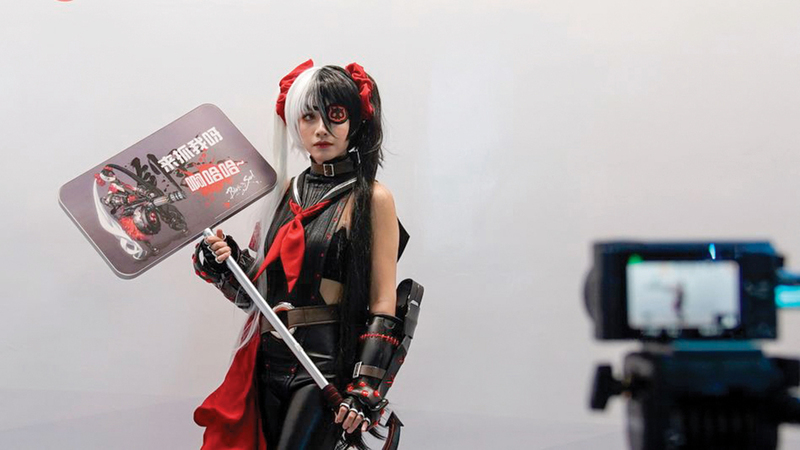 They called it spiritual opium

A girl in a costume poses for a photo at the Tencent game booth at the China Digital Entertainment Expo and Conference in Shanghai.

Chinese leaders once again leveled strong criticism of the online gaming industry, accusing the industry of spreading “spiritual opium” among Chinese youth and creating addicts who fail academically and in other areas.

"No industry or sport should develop at the expense of destroying a generation," said the Economic Information Daily, a media outlet of the ruling Chinese Communist Party.

The article called for new rules to curb what it called "electronic drugs."

The impact of such criticism was quickly felt in the world's largest video game market, which includes an estimated 740 million players, as the share price of the Chinese gaming giants fell dramatically.

Official restrictions may lurk in the industry in the future.

To avoid this, the largest game company, Tencent, which is owned by the richest man in China, immediately proposed new measures to restrict the use of its main game, Honor of Kings, among children.

China's leaders, like many parents around the world, are trying to figure out how video games can fit into their children's future. In 2018, China imposed a temporary ban on new games, and in 2019, it set certain ages for young people playing online games. It appears that these steps became justified after the World Health Organization added gaming disorder to its official list of diseases.

A similar concern remained with the IOC. In May, after years of declining viewership of its games and growing calls for the IOC to recognize esports as a form of athletics; The International Olympic Committee has launched a series of virtual Olympic Games, comprising just five sports: baseball, cycling, motorsports, rowing and sailing, but without any medals. The purpose is to encourage sports participation and "promote Olympic values". The International Olympic Committee, like China, is trying to build the best video games.

Many games develop useful skills, such as cooperation, team building, and self-confidence.

The opening ceremony of the Tokyo Games included music from video games such as "Sonic the Hedgehog", but what worries the IOC is that most games are violent and center around killing rather than kindness, as the main goal of the Olympics is to promote peace between peoples and nations and move away from the culture of infighting.

And many parents discovered that the key to protecting their children from the game frenzy is to explore what they lack in their lives, whether the child needs to know how to make friends, and is the family's discussion of the game in this direction?

And fill this void with interest and affection.

China may be approaching a moment of self-reflection and reflection on video games.

Soon after the article appeared in Economic Information Daily, the China News Service published an article calling on schools, game developers, parents and other parties to work together to prevent gaming mania.

• Many parents have discovered that the key to protecting their children from gaming madness is to know what they lack in their lives and how much they need friends.