Abu Dhabi Police reported that it had prepared a comprehensive plan, in coordination with strategic partners, in preparation for the new academic year, to ensure the return of students to school seats within the framework of implementing precautionary and preventive measures, and taking measures to ensure the safety of students and educational staff. 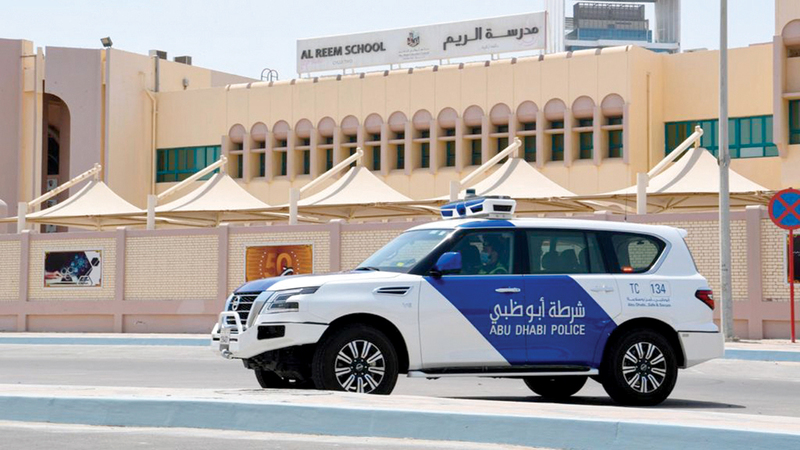 Abu Dhabi Police reported that it had prepared a comprehensive plan, in coordination with strategic partners, in preparation for the new academic year, to ensure the return of students to school seats within the framework of implementing precautionary and preventive measures, and taking measures to ensure the safety of students and educational staff.

The Traffic and Patrols Directorate confirmed the intensification of awareness programs to enhance the positive traffic behaviors of the various segments of society of road users, and to familiarize them with the laws and regulations, to provide the highest standards of traffic safety for students on their way to and from their schools.

Director of the Directorate, Brigadier General Mohammed Dhahi Al Himiri, confirmed that the plan focuses on deploying traffic patrols on intersections and internal and external roads in Abu Dhabi, Al Ain and Al Dhafra, in order to preserve the safety of students while heading to and leaving schools, and educating drivers about the importance of paying attention while driving, and reducing speeds near schools. schools, committing to safe driving, and cooperating with traffic patrols to enhance the flow of traffic, to avoid accidents.

He called on families to pay attention while transporting their children to schools, not to allow those under the age of ten to sit in the front seats, and to help them cross the street, as well as to use the spaces designated for parking vehicles at schools, to avoid obstructing traffic, and to teach children the correct ways to get on and off the bus. , and warn them not to play on the street while waiting for buses.

Al-Humairi urged school bus drivers to stop in designated and safe places, give students the opportunity to be able to board, sit in the seats, make sure they get off, stay away from buses before moving, not drive quickly, implement preventive measures for safe driving during fog, and leave a safe distance. And the obligation to open the “stop” arm when students go up and down.

He stressed the necessity of committing to a full stop when opening the “stop” arm, with a distance of no less than five meters, to ensure that students cross safely, noting that a fine of 500 dirhams and six traffic points will be applied, for not committing to opening the “stop” sign, or not complying with traffic instructions. A fine of 1,000 dirhams and 10 traffic points will also be applied for drivers not stopping when they see the "stop" sign for school buses transporting students.

The Directorate of Narcotics Control in the Criminal Security Sector implements awareness and preventive programs, in coordination with the Emirates Transport Corporation, targeting transport and safety supervisors, and bus drivers, to educate them about drug damage and prevention. It includes 15 lectures, two of which were held, benefiting 240 bus drivers and supervisors. In addition, intensive awareness programs will be organized for school students during the academic year.

The Community Police Department and "We are All Police" volunteers participate in providing public safety, protecting children and parents from the "Covid-19" virus, and limiting its spread, by providing awareness and guidance on how to take precautionary measures, in the interest of their health.