"Reliably protects the crew": what are the capabilities of the Russian armored vehicle "Boomerang"

State tests of the Boomerang combat platform can be completed in the next year and a half. This was reported in the "Military-Industrial Company", which is developing this project. The Boomerang is an eight-wheeled armored combat vehicle. It is created in two versions - infantry fighting vehicles and armored personnel carriers. It differs from the equipment of this class now used in the RF Armed Forces by a fundamentally new level of protection of the transported personnel. In addition, the "Boomerang" is created on a modular basis, which allows you to change the set of its weapons and other equipment depending on the customer's requirements. According to analysts, in the future, these vehicles can replace the BTR-82 in the Russian army. 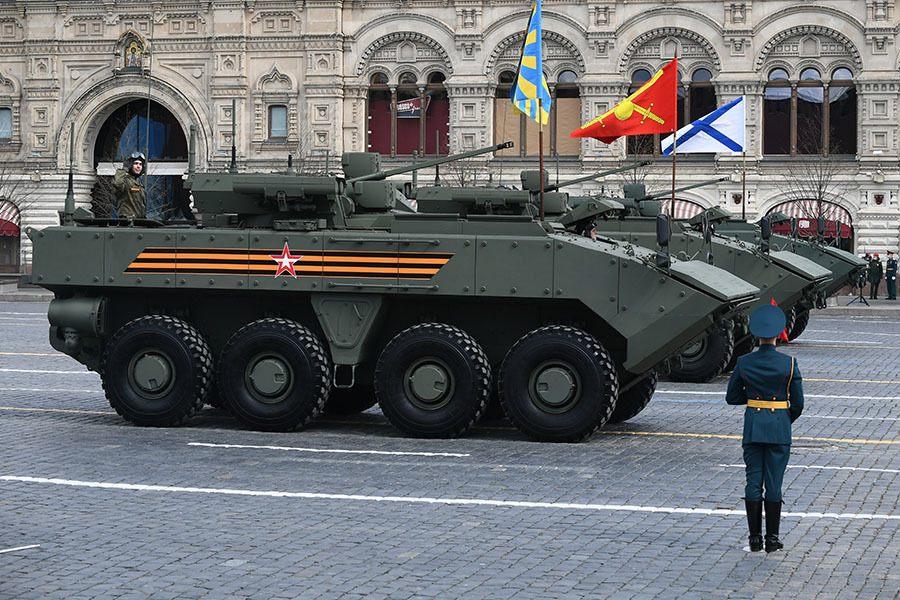 State tests of the Boomerang armored combat vehicle will be completed in the next year and a half.

This was announced by the general director of the Military Industrial Company (MIC) Alexander Krasovitsky.

“We have completed preliminary tests.

We are finishing two samples, and they go to state tests.

I think they will be completed within the next year - one and a half years.

The military-industrial complex is proceeding in accordance with our roadmap, which was approved by the Deputy Minister of Defense, "he said in an interview with TASS during the Army 2021 international military-technical forum.

According to him, the company has already received the necessary documents to promote this project to the foreign market.

“Two samples are now 80-85% assembled - we made them lighter so that the cars could float.

Moreover, for the K-16 and K-17 modifications, we have already received advertising and export passports and we can promote them abroad.

The company is already starting to make such proposals, because this is a very serious chassis, ”said Krasovitsky.

Earlier, a member of the board of the Military-Industrial Commission of the Russian Federation, Mikhail Osyko, said that Boomerang is at the final stage of testing and an experimental industrial batch will appear in the army in the near future.

Boomerang is a unified wheeled armored platform created by the Military Industrial Company (part of the Russian Machines holding) on ​​an 8x8 all-wheel drive chassis with an independent suspension.

For the first time, this machine was demonstrated at the closed part of the Russia Arms EXPO exhibition in 2013.

Boomerang was shown to the general public in 2015 at the Victory Day parade on Red Square.

When creating this project, the developers used a layout scheme that had not been previously used by Russian and Soviet gunsmiths.

In addition, the "Boomerang" was created using a modular principle, which allows "to change the composition of a particular vehicle of the family by installing various weapon systems, active and passive protection systems, depending on the purpose of the sample and the customer's requirements," the military-industrial complex reports.

According to Rostec, Boomerang can carry up to 11 personnel.

At the same time, the landing and disembarkation of the combat crew, in contrast to the BTR-82 currently in service with the RF Armed Forces, is carried out through the upper hatches and the aft door or ramp.

According to experts, this increases the safety of the landing in combat conditions.

In addition, the protection of the military is provided by means of reducing the visibility of the vehicle, passive armor, as well as active protection and jamming complexes.

“The seats of the paratroopers are anti-traumatic with a delivery link and five-point seat belts.

For embarkation and disembarkation of troops, a hinged ramp is equipped in the rear of the hull, ”the developers inform.

It should be noted that the Boomerang platform is created in two versions: an armored personnel carrier (K-16) and an infantry fighting vehicle (K-17).

An uninhabited universal combat module "Boomerang-BM" is installed on the BMP K-17.

“The main weapon in this combat module is the 2A42 30-mm automatic cannon.

Its ammunition load, ready for combat use, is 500 rounds loaded in two belts.

As an additional weapon in the armament complex of the BMP K-17, a 7.62-mm PKTM machine gun paired with a cannon is used with an ammunition load of 2,000 rounds of ammunition, loaded in one tape, "- stated on the website of the military-industrial complex.

They are designed to deal "with armored moving and stationary ground targets, low-flying aircraft, helicopters and unmanned aerial vehicles," according to the creators of "Boomerang".

The maximum firing range of the Kornet-D is 10 km.

It is worth noting that there is no information on the K-16 armament on the military-industrial complex website, and also, in general, it is not reported how the equipment of the two vehicles will differ.

However, analysts suggest that the K-16 will be equipped with lighter weapons.

According to the military-industrial complex, "Boomerang" can reach speeds of at least 100 km / h on the highway and has a cruising range of at least 800 km.

It uses a YaMZ-780 turbodiesel engine as a power unit, which develops a maximum power of 750 hp.

The developers also report that the software and hardware complex used on the Boomerang makes it possible to integrate the armored vehicle into a unified tactical echelon control system and “provides work in a unified information space for combat control”.

According to a military expert, retired colonel Viktor Litovkin, a distinctive feature of the Boomerang is its modular system.

“This vehicle is good because it can be equipped with any warhead, for example, a 30-mm cannon, anti-tank guided missiles, anti-aircraft systems.

In addition, an important feature is that this car can overcome any obstacles, including moving on water, ”the expert said in an interview with RT.

Viktor Litovkin believes that such vehicles are in demand today in the Russian army, but they are unlikely to be able to completely replace the time-tested BTR-82 in the near future.

“Such vehicles are in demand today in the Russian army.

"Boomerang" reliably protects the crew, including from anti-vehicle mines.

However, it is unlikely that Boomerangs will immediately replace the existing BTR-82s, since they will serve the Russian army for quite a long time, ”the analyst said.

It should be noted that the "Boomerang" and the BTR-82, also produced in the military-industrial complex, have a number of significant design differences.

In addition, this armored personnel carrier in various modifications has been used in the troops for more than a decade, so its operation and maintenance in the army is well established, experts say.

At the same time, "Boomerang" provides incomparably higher protection for personnel, has a more powerful engine and can move faster than the BTR-82 (100 km / h versus 80 km / h). In addition, in the BTR-82, the landing and landing of troops is carried out mainly through the side doors, which in combat conditions is not the safest solution. In addition, analysts say, the BTR-82 was created on the basis of still Soviet models of armored personnel carriers and has actually reached the limit of its modernization capabilities.

The BTR-82 has practically exhausted its capabilities, so the Boomerang is more preferable.

The Boomerang has a modern class of protection, including mine, a modern fire control system that detects targets, identifies them and allows high-precision fire at them.

In addition, Boomerang has a modular system, "military expert Alexei Leonkov explained in an interview with RT.

Analysts do not exclude an option in which both vehicles can be used in parallel by the troops.

"The machines will be used for different purposes, since they are still quite different from each other," says Viktor Litovkin.

Experts believe that at this stage it is premature to talk about the prospects of the Boomerang in foreign markets, because the vehicle has not yet passed the test cycle and has not been adopted for service in the RF Armed Forces.

“Until this machine takes a firm place in the ranks of the Russian armed forces, it is difficult to talk about how it will be sold abroad.

In theory, "Boomerang" can be of interest to any country other than those that are part of NATO or are controlled by the United States.

That is, we are talking about India, China, Iraq, Egypt, Algeria and our other traditional partners in the military-technical sphere, ”said Viktor Litovkin.

“We have traditional consumers of our equipment: representatives from Asian countries, some from Africa and South America.

Many of these countries are armed with armored personnel carriers produced in the USSR of the 1960s-1980s.

These states are likely to show interest in Boomerang, the analyst concluded.