France: the heroine of the Resistance, Joséphine Baker, will rest in the Panthéon in Paris

The Music-Hall star will be the first black woman to be buried there Share August 22, 2021 Franco-American music hall star Joséphine Baker (Saint Louis, June 3, 1906 - Paris, April 12, 1975), a civil rights activist in support of Martin Luther King and heroine of the anti-Nazi Resistance, will join the Panthéon in Paris, where France honors the "greats" of its history, next November 30th. The news was anticipated today by the newspaper "Le Parisien" and confirmed 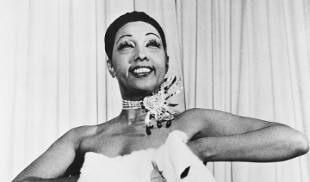 August 22, 2021 Franco-American music hall star Joséphine Baker (Saint Louis, June 3, 1906 - Paris, April 12, 1975), a civil rights activist in support of Martin Luther King and heroine of the anti-Nazi Resistance, will join the Panthéon in Paris, where France honors the "greats" of its history, next November 30th. The news was anticipated today by the newspaper "Le Parisien" and confirmed by the Elysée.

Baker will thus be the first black woman and only the sixth woman whose remains rest in the former Christian church transformed into a large secular temple that honors some of the greatest French personalities, including Alexandre Dumas, Victor Hugo, Pierre and Marie Curie, Voltaire.

The last personality to join the Panthéon in 2018 was Simone Veil, former Minister of Health and President of the European Parliament.

The newspaper "Le Parisien" explains that the President of the Republic, Emmanuel Macron, announced his decision to accept Baker's entry into the Panthéon on 21 July. "That's a yes," Macron said as he received a small delegation to illustrate a petition that collected 38,000 signatures.

The Baker dossier had reached the Elysée in June. A few weeks later, Macron gave his approval and announced it at a meeting at the presidential palace that was not officially registered in the president's agenda, writes the Parisian newspaper, according to which, among others, participated writer Pascal Bruckner, singer Laurent Voulzy, essayist Laurent Kupferman, entrepreneur Jennifer Guesdon and Brian Bouillon-Baker, one of the artist's 12 adopted children.

The petition delivered to Macron first of all recalls the commitment of the singer and dancer in the French Resistance, underlines her exceptional success as an artist, an international notoriety achieved in Paris in 1925 at the Théâtre des Champs-Elysées in the "Black Revue"; for its attractiveness it was called the "black Venus".

The signatures in support of the petition for entry into the Panthéon were also presented to the presidents of the National Assembly and the Senate.

Brian Bouillon-Baker is at the origin of this "crusade" in memory of his adoptive mother, who took the place of the philosopher Régis Debray who in 2013 provocatively launched the idea of ​​this form of national recognition for Afro-American dancer who in the 1920s caused a scandal by dancing wearing only a banana skirt.

Brian Bouillon-Baker, thanking President Macron "moved", recalled that there are many arguments in favor of the star's entry to the Panthéon: the one who was the first black international star dedicated "the last 25 years of her life to the struggle for women's rights and against racial discrimination ". But above all he points out that between 1940 and 1942 Baker collected information on the positions of the German army in France to deliver them to the partisans. Customs officers who asked her for autographs rather than her papers never bothered to check her at the borders. The dancer was thus able to transmit to London reports pinned under her dress or transcribed with sympathetic ink on the scores of her songs.

His actions were awarded in 1945 with the rank of lieutenant of the Air Force, the War Cross, the Medal of the Resistance and the Legion of Honor. In addition to supporting the battle for civil rights in the US, in France Baker engaged with the International League against anti-Semitism.