Australia, clashes with police in anti-lockdown protests in Melbourne

Australia, which has fully vaccinated 25% of its population, still remains on lower figures than most of the world&nbsp; 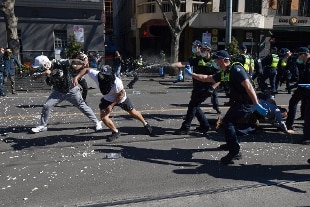 August 21, 2021 Hundreds of protesters protesting in Melbourne against anti-Covid restrictions clashed with police as Australia records its highest daily rate of infections. The images released by the ABC show a group of hundreds of protesters trying to force a police cordon near the Parliament and some of them clash violently with the agents, who respond with pepper spray. The police line-up in Sydney is also impressive.

In the past 24 hours, Australia has recorded an additional 886 cases in the states of Victoria and New South Wales, most of them in Sydney, the epicenter of the epidemic. 754 new cases had been registered on Thursday, despite the eight-week lockdown in and around Sydney.

In the state of New South Wales, where Sydney is located, three deaths related to the disease have been recorded. The authorities have decided to extend the confinement in this state for another month, until the end of September. Melbourne, in the state of Victoria, will remain confined until 2 September.

Australia, which has fully vaccinated 25% of its population, still remains below those of much of the world and has over 43,000 infections and 978 deaths since the start of the pandemic.