Beijing changes the law on family planning: each couple will be able to have 3 children

In addition, support measures have been adopted for families of a financial, fiscal, insurance, educational, housing, employment nature 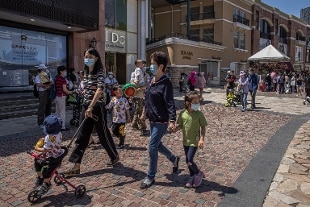 August 20, 2021 China has approved amendments to the Population and Family Planning Act that will allow Chinese couples to have three children.

This was reported by the Xinhua agency at the end of the work of the summit of the Chinese legislative body, the Standing Committee of the National People's Assembly, which opened in Beijing last Tuesday.

The revision of the law establishes that "the state promotes marriage and childbirth at the right age, antenatal and postnatal care and that a couple can have three children", reads the note issued by the Chinese news agency.

In addition, financial, fiscal, insurance, educational, housing, employment and other support measures are adopted for families.

China stopped its decades-long one-child policy at the end of 2015, after several easing, allowing all couples to have two children, to counter the aging of the population.

The turning point had not, however, countered the low birth rate, and last May, the leaders of the Chinese Communist Party had elaborated the three-child policy after the demographic crisis that emerged from the data of the latest national census.