"Key partner in Western Europe": what topics will Putin and Merkel discuss at the talks in Moscow

Moscow will host talks between Russian President Vladimir Putin and German Chancellor Angela Merkel. As reported in the Kremlin, politicians will discuss issues of bilateral relations and the international agenda. In turn, the German government clarified that the focus of the talks will be the Nord Stream 2 gas pipeline, the conflict in southeastern Ukraine, as well as the events in Afghanistan and the situation in Belarus. Experts note that the fact that this will probably be Merkel's last visit to the Russian Federation as Chancellor gives particular importance to these negotiations, since she will soon leave this post after 16 years in power. 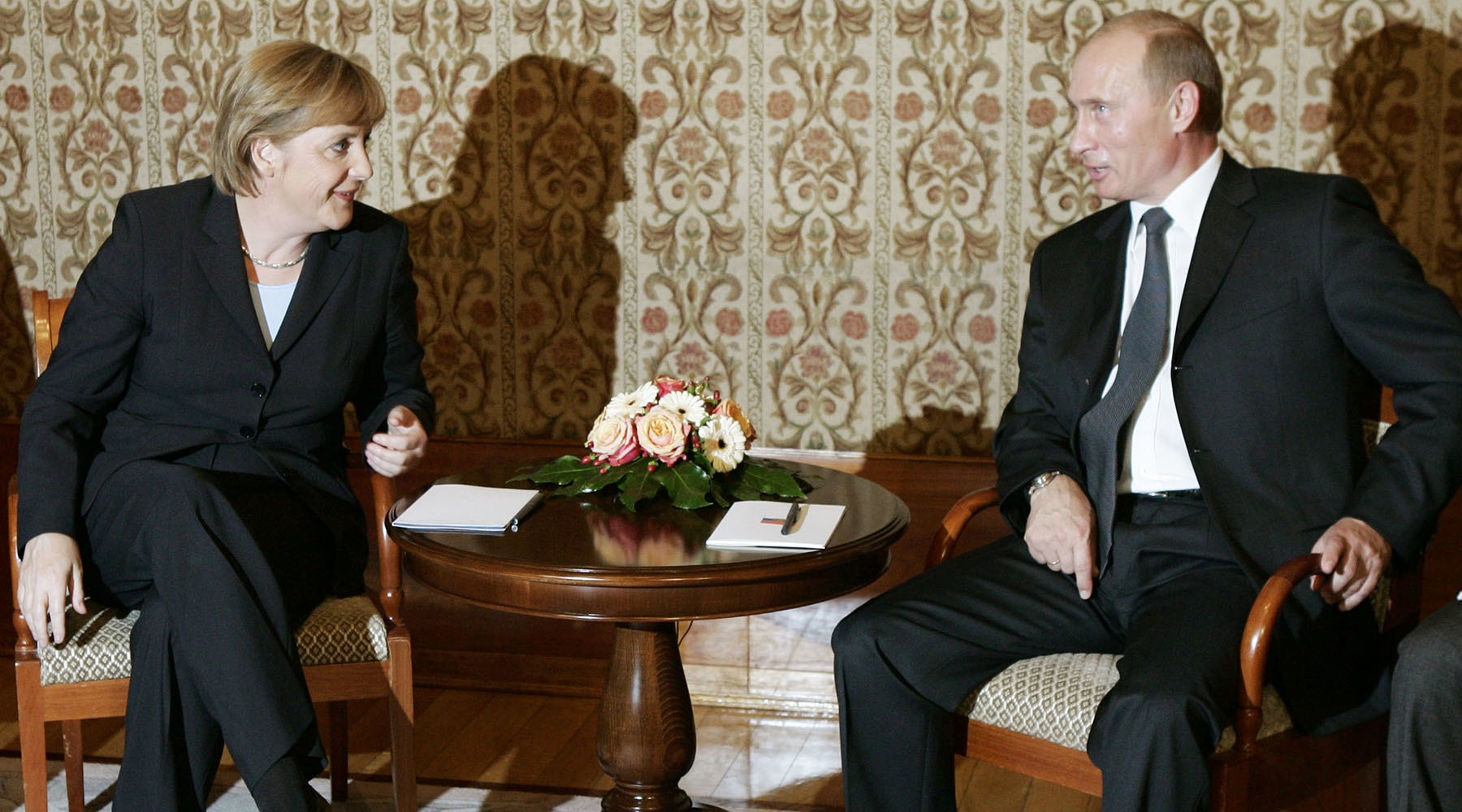 According to the Kremlin press service, the talks will focus on issues of bilateral relations and the international agenda.

"It is planned to discuss the state and prospects for the development of bilateral cooperation in various fields, as well as to consider a number of topical international and regional issues," the press service of the President of the Russian Federation said.

The official representative of the German government Steffen Seibert, in turn, said that in Moscow, in addition to negotiations with the Russian leader, Merkel plans to lay a wreath at the Tomb of the Unknown Soldier in the Alexander Garden.

Seibert also informed that the Russian leader and German Chancellor will touch upon the situation in Afghanistan and Belarus, the conflict in Donbass and the Nord Stream 2 gas pipeline project.

The last time the German Chancellor visited Moscow was in January 2020.

According to experts, the current visit will be a "farewell" for Merkel - in autumn she will leave the post of chancellor.

According to Vladimir Shapovalov, deputy director of the Institute of History and Politics at Moscow State Pedagogical University, negotiations between Moscow and Berlin are traditionally of great importance not only for bilateral relations between the Russian Federation and Germany, but also for Europe as a whole.

“This is an important meeting, since Germany is a key partner for Russia in Western Europe.

In addition, Russian-German relations largely determine the general background of the ambiguous relations between the Russian Federation and the EU.

Much depends on the intensity of the dialogue between Russian and German politicians in the development of Russian-European relations, "the analyst said in an interview with RT.

According to analysts, one of the key topics at the talks will be the fate of the Nord Stream 2 gas pipeline.

“It is important that Nord Stream 2 works and benefits Russia, Germany and other European countries and, accordingly, is not subject to revision by certain political players, so Putin and Merkel will discuss how this project can be protected,” - said Vladimir Shapovalov.

As a reminder, SP-2 is two strings of a gas pipeline with a length of over 1200 km each and a total capacity of 55 billion cubic meters.

This project, despite active attempts on the part of the United States to hinder its implementation, is almost completed.

On July 28, the pipeline operator Nord Stream 2 AG announced that it was 99% complete.

One of the most active opponents of the construction of this gas pipeline is Ukraine.

As analysts explain, Kiev is afraid of losing revenues from the transit of Russian fuel after the commissioning of Nord Stream 2 and the expiration of the Russian-Ukrainian agreement on gas transportation, calculated until 2024.

The USA is also insisting on the continuation of transit through Ukraine.

In July 2021, Angela Merkel visited the United States, where she entered into an agreement with President Joe Biden.

According to him, in particular, Germany pledged to seek an extension of the contract for the transit of Russian gas through Ukraine for another ten years after 2024 and promised to take action against Russia if Moscow starts using energy resources to put pressure on other countries.

In Moscow, such agreements were criticized.

Thus, the press secretary of the President of the Russian Federation Dmitry Peskov noted that an agreement on the extension of transit can only be reached between Russia and Ukraine.

“Here, of course, the Russian Federation is not mentioned in any way.

After all, this agreement can be extended between Ukraine and the Russian Federation, so there is a slight effect - I don't know how to translate it into other languages, but in Russian - they married me without me, ”he said.

At the same time, it is reported that at the upcoming negotiations, Germany intends to advocate that the Russian Federation continues to supply gas through the territory of Ukraine after 2024.

“For us, it is of central importance that Ukraine, even with Nord Stream 2, remains and should remain a transit country for Russian gas,” said Steffen Seibert.

At the same time, a representative of the FRG government doubted that at the meeting on August 20, all concerns of Ukraine on this issue would be removed.

“I do not expect that there will be an end to the doubts or concerns that Ukraine associates, for example, with the theme of Nord Stream 2, and which it has repeatedly expressed,” Seibert said.

It is worth noting that after a visit to the Russian Federation, the Chancellor intends to go to Kiev, where she will hold talks with President of Ukraine Volodymyr Zelensky on August 22.

Kiev has already announced that the fate of gas transit will be discussed at the meeting.

As analysts remind, Moscow has never announced that it is going to stop transit through Ukraine after the commissioning of the SP-2 and the completion of the contract with Kiev.

However, experts emphasize, the fate of the transit largely depends on the position of the Ukrainian authorities, which have never been reliable partners in this matter and often abused their monopoly position as a transit country.

“Russia has already stated that it is ready to continue transit if it is beneficial to both sides.

Moscow is pursuing a completely open policy that is not aimed at creating any artificial restrictions in the economic sphere.

In this case, it all depends on how the Ukrainian authorities are ready for cooperation, ”explained Volodymyr Shapovalov.

Steffen Seibert also told reporters what position Merkel will adhere to in negotiations over the situation in Donbass.

According to him, for the settlement of the conflict in this region "Russia could do much more than it is doing."

Experts call this rhetoric untenable, because the main obstacle to the implementation of the Minsk agreements is the position of Kiev.

In particular, Ukraine refuses to grant Donbass a special status and make appropriate changes to the country's constitution, which is one of the points of the Minsk agreements.

In addition, the Ukrainian authorities have repeatedly stated that the Minsk agreements need to be adjusted.

In particular, Kiev wants to change the sequence of the implementation of the items on the return of control over the border to the Ukrainian authorities and the holding of elections in Donbass.

Let us remind you that the Minsk agreements presuppose first a vote and then a solution to the border issue.

In Kiev, they want to do the opposite.

However, the Russian authorities believe that the transfer to the Ukrainian authorities of control over the border with Russia in the Donbass before the elections could turn into a repetition in the region of the tragedy in Srebrenica in 1995, where thousands of people died.

In addition, the Russian side notes that the Minsk agreements have the status of an international law and are confirmed by the relevant UN Security Council resolution, therefore it is impossible to change them.

In addition, Moscow points out that it is impossible to change one item in this document without affecting others, because all of its provisions are interrelated.

According to analysts, for Merkel, the fate of the Minsk agreements is of particular importance, since they were created with her active participation.

“An important place in Russian-German relations is occupied by the Normandy format and the implementation of the Minsk agreements, since Germany is an active participant in the process of resolving the conflict in the south-east of Ukraine.

At the same time, Kiev's repressive policy towards Russians and Russian-speakers in Ukraine is only gaining momentum.

So the leaders have something to discuss, ”said Vladimir Shapovalov.

In turn, Alexander Kamkin, a leading researcher at the Center for German Studies at the Institute of Europe of the Russian Academy of Sciences, stated that progress in resolving the situation in Ukraine should not be expected from negotiations.

“Merkel will have one last chance to discuss the Minsk Agreements as chancellor with her Russian counterpart.

This issue will be raised at the talks in Moscow, but in Germany everyone understands that these agreements are dead, "the analyst said in an interview with RT.

"The focus will be on Ukraine"

According to experts, the parties can also discuss the migration crisis on the border of Belarus and Lithuania.

Let us remind you that illegal migrants, including those from the Middle East, enter Lithuania from the Belarusian side.

Vilnius believes that this situation has developed because of the actions of Minsk, however, the Belarusian leadership rejects such accusations.

In addition, according to political analysts, it will be important for Putin and Merkel to exchange views on the situation in Afghanistan, where, against the background of the withdrawal of American troops, the radical Taliban * was able to establish control over the country.

At the same time, analysts believe that, despite the rich agenda, the main topics of the talks will still be Nord Stream 2 and the situation in Ukraine.

“The focus will be on the completion of the construction of Nord Stream 2 and the crisis situation in the south-east of Ukraine.

These are the most important topics for relations between the RF and the FRG, ”Vladimir Shapovalov said.

“Of course, the focus will be on Ukraine and the issue of gas transit.

This is evidenced by the fact that Merkel will then visit Kiev, ”he said.

Vladimir Shapovalov believes that "the fact that German Chancellor Angela Merkel is leaving her post after a long stay in power gives particular relevance to these negotiations."

“At the moment she is, of course, the leading, most authoritative German politician, and her importance in the politics of the Federal Republic of Germany can hardly be overestimated.

It is important for Russia that the positive aspects that, despite the disagreements, still exist in Russian-German relations, remain in the subsequent period.

In addition, both sides are interested so that the existing problems are not aggravated in the future, ”the expert concluded.