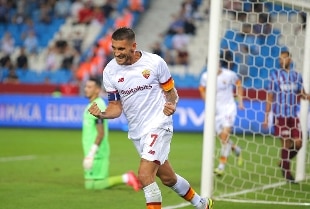 The exultation of Pellegrini (Ap)

19 August 2021 Roma beat Trabzonspor 2-1 (0-0) in Trebizond in Turkey in the first leg of the playoff of the new UEFA competition, Conference League.

Leading in the 10th minute of the second half with Lorenzo Pellegrini, Mourinho's team was joined 9 minutes later by Cornelius, but Shomurodov scored the winning goal in the 82nd minute.

The return is scheduled for next Thursday at the Olympic stadium with kick-off at 7 pm.