The Deanship of Student Affairs at Al Qasimia University, in coordination with the Community Police of Sharjah Police, organized a lecture for students on the forms and dangers of electronic extortion, and mechanisms to prevent potential risks. 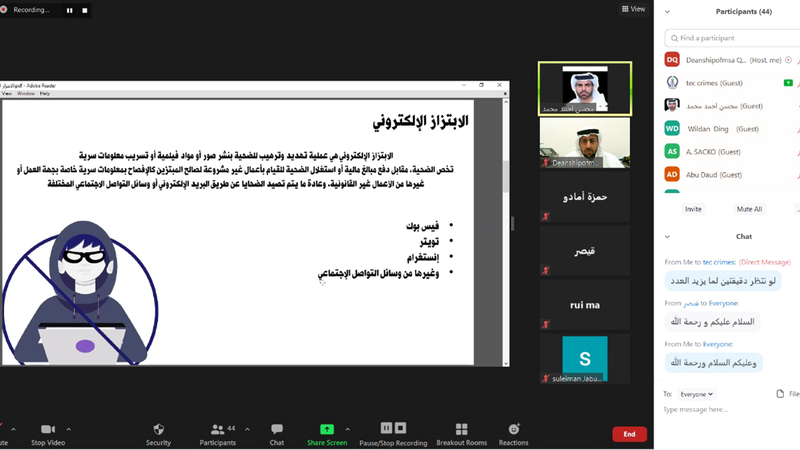 The lecture included ways to deal with suspicious websites and accounts.

The Deanship of Student Affairs at Al Qasimia University, in coordination with the Community Police of Sharjah Police, organized a lecture for students on the forms and dangers of electronic extortion, and mechanisms to prevent potential risks.

This came during the lecture, which was organized remotely, and entitled "Beware of Electronic Extortion", and addressed its concept, risks and ways to address it.

The lecture was presented by the Director of the Cybercrime Branch of the Department of Criminal Investigations and Investigations in Sharjah Police, Major Mohsen Ahmed Muhammad, in which he addressed the pros and cons of using social networking sites and accessing the Internet, and proposed dealing with this large virtual world.

Major Muhammad was keen to provide and explain aspects of awareness, advice and guidance to university students in dealing with websites and suspicious accounts of unknown personalities, and not to get carried away by them, or meet their demands, and to inform the competent authorities in the event of exposure to electronic blackmail in all its physical and moral forms. He stressed the importance of caution in dealing, downloading smart electronic applications, and the need to read the terms and conditions for subscribing to them, in addition to not being reassured by strangers on social media, because they may use images and information in the process of blackmailing people, especially students. He explained how to deal in the event of a person being subjected to electronic blackmail, by not responding to the blackmailer, and resorting to the competent authorities at the university and the police, stressing that cases are dealt with in strict confidentiality by the concerned authorities, stressing the intensification of efforts to limit the spread of this phenomenon, and to educate Society and awareness of the dangers of extortion on social networking sites.