After hosting millions of Syrians, hordes of Afghan refugees are knocking on Turkey's door

While Turkey hosts a large number of Syrian refugees, which puts pressure on its infrastructure and resources, it appears that it is on the verge of a new wave of refugee flows, this time from Afghanistan, after the Taliban movement took control of it. A colleague in the forum 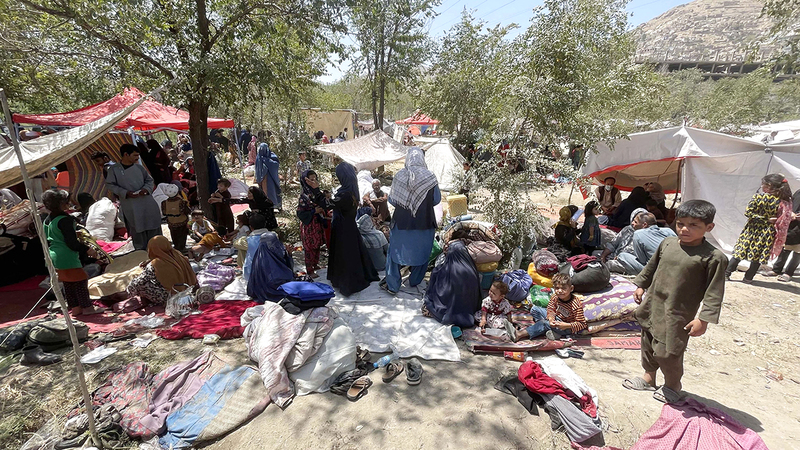 They pay smugglers $1,000 for the journey from Kabul to Van

After hosting millions of Syrians, hordes of Afghan refugees are knocking on Turkey's door

While Turkey hosts a large number of Syrian refugees, which puts pressure on its infrastructure and resources, it appears that Turkey is on the cusp of a new wave of refugee flows, this time from Afghanistan, after the Taliban movement took control of it.

A prominent Turkish analyst and fellow at the Middle East Forum in the United States, Burak Bekdel, said in a report published by the American Gatestone Institute, that locals in Istanbul were shocked, at last, to see hordes of Afghan youths dressed in traditional, worn clothes, wandering aimlessly in the neighborhoods that were Already home to thousands of Syrian refugees.

Subsequently, Turkish police arrested and expelled nine of the men.

Hundreds of others are communicating with relatives and friends in Afghanistan and Iran, likely to inform them of the illegal immigration routes to Turkey.

Afghans usually pay smugglers $1,000 for the journey from Kabul to Van in eastern Turkey.

With the victory of the Taliban and the collapse of the Afghan government, hundreds of thousands may cross through Iran into eastern Turkey, in search of the least dangerous (and ultimately less expensive) route to European Union territory.

After the United States withdraws completely from Afghanistan, the Turkish border with Iran will be crowded with people trying to enter Turkey.

But once in Turkey, there is no clear path to legal status, and absolutely no organizations to support families in need of food and shelter.

UNHCR is no longer processing asylum applications in Turkey, and applications through government offices can take years, Bekdel says.

Turkey is facing this new wave of illegal immigrants at a time when it already hosts 3.6 million registered Syrian immigrants, which is already 4.37% of Turkey's total population.

Today, more than one million Syrian children between the ages of five and 17, or 63 percent of the total, attend Turkish schools.

In the past three years, 120,000 Syrians became Turkish citizens, after obtaining citizenship.

They own shops, run businesses, and live in private, predominantly Syrian neighborhoods in Ankara and Istanbul.

In three Turkish provinces (Gaziantep, Hatay and Şanlıurfa) Syrians represent more than 20% of the population.

In the Turkish state of Kilis, they make up 74.3% of the population.

Bekdel says Turks, whose average GDP per capita is $8,000, are already tired of cheap, illegal Syrian labor taking their jobs.

Now that the threat of Afghan immigrants is so visible on Turkish streets, Turks are discovering a new wave of nationalism.

There are already signs that this nationalism can turn violent.

On August 12, police in Ankara arrested 76 people in connection with attacks on homes and businesses believed to be owned by Syrians, after a Turkish teenager was killed in a fight with a group of migrants from Syria.

A crowd of people, numbering hundreds, took to the streets of the Altindag district.

They were throwing stones at the homes of Syrian immigrants, looting some shops and chanting anti-Syrian slogans, and the scene looked like a massacre between two factions.

The Afghans are facing perhaps the world's most brutal army of extremists, now positioned in Kabul, armed with what US President Joe Biden has described as "all the tools and equipment of any modern army."

We provided advanced weapons.” The Taliban captured those weapons from the disintegrating Afghan National Army.

Indeed, Biden has given “advanced weapons,” courtesy of US taxpayers, not only to the Taliban, al-Qaeda, and ISIS, but also to Russia, China and Iran.

Bekdel adds that Afghans have good reasons to flee their country by the millions.

Iran is their typical first stop.

Once in Iran, they are given easy and safe passage to Turkey, and this is Iran's gift to President Recep Tayyip Erdogan.

The arrival of another five million over a period of years would cripple Turkey, its economy, its politics, and its relative integrity.

But Afghan immigrants will not be Turkey's only problem.

At the height of the Syrian crisis, 1.3 million Syrians sought asylum in Europe.

By nationality, in 2015, they were the largest group among immigrants of different nationalities coming from Turkey to Greek territory.

Five years later, Afghans were the largest group, and that was before the biggest Afghan wave began.

In 2020, Erdogan threatened to flood EU countries with millions of Syrians.

His government moved thousands of Syrians to the Turkish border with Greece in Thrace, opening the gates and pushing them into the wasteland.

Within the first week, the Turkish government said nearly 200,000 Syrians had entered Greece.

Bekdel concludes, however, that if Greek border agencies and the European Union do not want to relive the 2015 migrant crisis, they should review their plans to protect Greek territory from migrants, and prepare for another influx this year.

• Locals in Istanbul were finally shocked to see hordes of young Afghans dressed in traditional, worn clothes wander aimlessly through neighborhoods that were already home to thousands of Syrian refugees.

• With the victory of the "Taliban" and the collapse of the Afghan government, hundreds of thousands may cross through Iran to eastern Turkey, in search of the least dangerous and "least expensive" route to the territory of the European Union in the end.

• During the past three years, 120 thousand Syrians became Turkish citizens, after obtaining citizenship, and they own shops and run businesses, and live in private neighborhoods with a Syrian majority in Ankara and Istanbul.