Afghanistan today.. pockets of resistance, women in the streets, and the Taliban woo the world

The US President answered a question regarding the change in the Taliban's approach at a time when his administration raised a file that "affects the legitimacy" of any government formed by the movement. While demonstrations took place in Kabul and other cities, Shah Massoud's son announced that he was massing his forces. 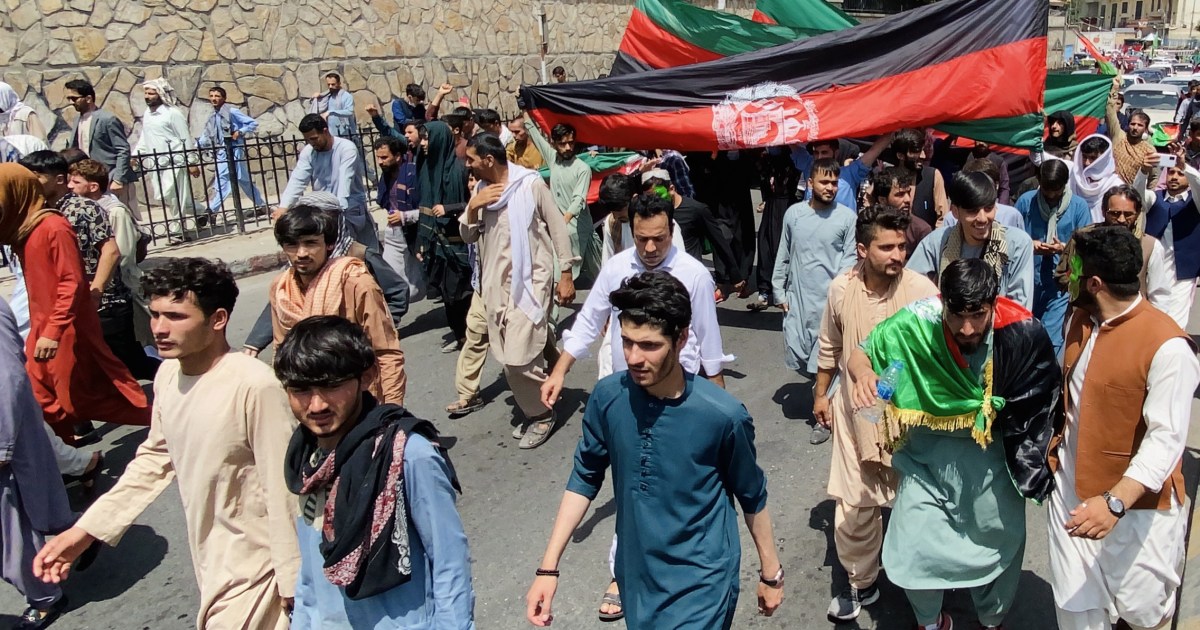 US President Joe Biden answered a question about the extent to which the Taliban's approach has changed at a time when his administration raised a file that "affects the legitimacy" of any government formed by the movement.

While the Taliban commemorated independence and demonstrations took place in Kabul and other cities, Shah Massoud's son announced that he was mobilizing his forces to fight the new rulers of the country.

US President Joe Biden said the Taliban were in the midst of an "existential crisis" over their role on the international stage.

But he made it clear that he did not believe the group had fundamentally changed its course, Bloomberg News reported Thursday.

In an interview that aired Thursday morning on ABC, Biden said, "Let me put it this way: I think they're going through some kind of existential crisis about whether they want to be recognized by the international community as a legitimate government. I'm not sure they want to." that".

Biden's comments point to a looming question whether the United States will recognize the Taliban as a government in Afghanistan, having quickly taken control of the country.

The United States has already taken steps to prevent the flow of money to the Taliban and could choose to negotiate relief from economic sanctions if it agrees to block international terrorist groups like al-Qaeda and cares about protecting the rights of women and minorities.

In another direction, Biden stressed that the Taliban will not return to what it was, "when we started the war, we killed Osama bin Laden and eliminated al-Qaeda there."

"Al-Qaeda and ISIS have spread, and the threats from Syria and East Africa against us are greater than those from Afghanistan," Biden said.

US President Joe Biden confirmed that the United States still wants to complete the withdrawal process from Afghanistan by August 31.

A Pentagon spokesman said Washington had not made a decision to change the date of the military withdrawal from Afghanistan and that additional discussions with the Taliban would be required.

In the same context, a senior US official said that the United States pressured the Taliban to return Mark Frerichs, an American kidnapped in Afghanistan, and stressed that his case would affect the legitimacy of any future government led by the movement.

The official said that Frerichs' family visited the US State Department this week to discuss his case, after the Taliban seized control of the Afghan capital, Kabul, last Sunday.

The official added that Frerichs, who worked on construction projects in Afghanistan and is believed to have been kidnapped in early February 2020, is being held in Taliban prisons.

The State Department last year offered a reward of up to $5 million for information in his case.

The official, who spoke on condition of anonymity, said that US negotiators had repeatedly raised Frerichs' case during their talks with the Taliban in Doha, and that Washington would study whether the Taliban respect international law prohibiting hostage-taking, if it decided to recognize a future government.

"It would be difficult for us to have a normal relationship with any government that holds someone in this way," the official in charge of Frerichs' detention said.

Several demonstrations took place today, Thursday, in Kabul, with the participation of women, on the anniversary of the country's independence from Britain.

According to videos broadcast by activists on social media platforms, the participants in the Kabul demonstrations - which were presented by a group of women - raised the flag of Afghanistan and chanted the slogans "We taught our identity" at a time when Taliban militants spread in the places where the demonstrations took place.

Al-Jazeera correspondent reported that US F-16 fighters flew over Kabul Airport, and this coincided with the firing of sound bombs to disperse the crowds in the vicinity of the airport.

A Pentagon official explained that the flight of the plane was related to securing evacuations from Kabul International Airport.

Al-Jazeera correspondent said that 17 people were killed in Kabul due to the shooting and the stampede since last Sunday.

Reuters news agency quoted an eyewitness as saying that a number of people were killed today in the eastern city of Asadabad, after Taliban fighters fired at people waving the national flag in a march on the occasion of Independence Day, a day after the killing of 3 in a similar protest in the city of Jalalabad.

The eyewitness told Reuters that it was not clear whether the dead in this city - which is the capital of Kunar province (east of the country) - fell due to shooting by Taliban militants or from the stampede that followed.

The media reported that the city of Jalalabad and one of the districts of Paktia province witnessed protests, but there were no reports of violence.

On the occasion of Independence Day, Taliban spokesman Zabihullah Mujahid said that the war in Afghanistan is over, and that the time has come to live in peace among the various groups of the Afghan people.

Mujahid added during a celebration commemorating Afghanistan's independence that was held in Kabul and attended by a number of the movement's leaders, that those who live in this country are one people and one sect, and there is no difference between them.

He described the movement's control of the country as a third independence after the victory of the Afghan people over the British and the Russians, as he put it.

The Taliban spokesman added in a tweet, that the movement wants good diplomatic and commercial relations with all countries.

In a related context, a Taliban official revealed that there are ongoing consultative meetings between the movement's leaders and officials from the former Afghan government.

He pointed out that the movement will offer some members of the former regime to assume positions in the new Afghan government, in which women will have a role, according to him.

In a related context, Ahmed Masoud, son of the late famous leader, Ahmed Shah Masoud (assassinated in 2001), announced in an opinion article he published in the American newspaper "Washington Post", the launch of what he described as the "Mujahideen resistance" against the Taliban's control of the country.

"Today I am writing from Panshir Valley (northeast) and I am ready to follow in my father's footsteps, with the fighting mujahideen ready to confront the Taliban again. We have stores of ammunition and weapons that we have patiently collected since my father's time, because we knew that day might come," Ahmed Masoud said.

"We also have the weapons of the Afghans who, during the past 72 hours, have responded to my call to join the resistance in Panjshir. We have soldiers from the regular army who were disgusted with the surrender of their leaders and are now making their way to the hills of Panjshir with their equipment. Former members of the Special Forces have also joined our struggle," he added. .

At the end of the article, Shah Massoud's son explicitly requested Western support for what he called the "national resistance," and said, "We know that our military forces will not be enough and will be quickly exhausted unless our friends in the West find a way to provide us with support without delay."

On the other hand, Russian Foreign Minister Sergey Lavrov said - during a press conference in Moscow today - that what he called the resistance against the Taliban is concentrated in the Panjshir Valley, where there are forces belonging to the Vice President and the son of Shah Massoud.

Lavrov added that the Taliban does not control all Afghan territory, calling for talks to form a government that represents Afghans.

The Pentagon also said that it had received reports of pockets of resistance in some areas of Afghanistan, but stressed that evacuations are the primary mission of the US military.