"Today is a proud and memorable day" 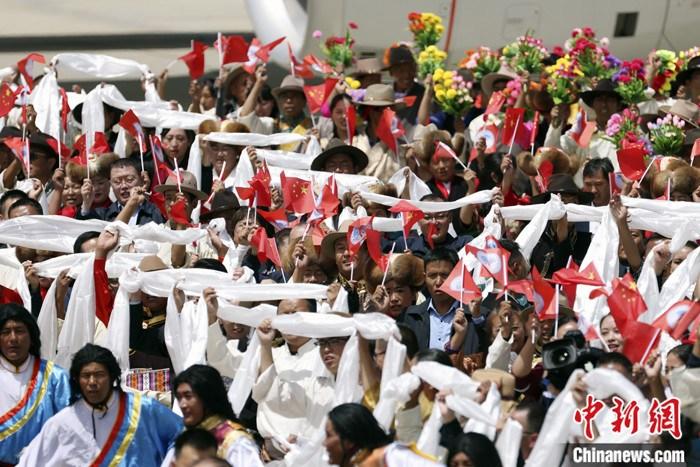 On August 19, the celebration of the 70th anniversary of Tibet’s peaceful liberation was held in the Potala Palace Square in Lhasa. The Central Delegation and thousands of people from the Tibet Autonomous Region gathered together to celebrate.

On May 23, 1951, the "Agreement between the Central People's Government and the Tibetan Local Government on Measures for the Peaceful Liberation of Tibet" (the "17-Article Agreement") was signed in Beijing, proclaiming the peaceful liberation of Tibet.

The history of Tibet opened a new page.

"Today is a proud and memorable day." At the celebration, 30-year-old Cidan Tashi told a reporter from China News Agency that he was teaching Tibetan at Lhasa No. 2 Middle School.

On the 19th, he got up early, dressed neatly and solemnly put on the commemorative badge to participate in the celebration.

The Potala Palace Square was newly decorated that day, colorful flags fluttered in the wind, and the Tibet Peaceful Liberation Monument on the south side of the square stood majestic. The two sides of the exhibition board painted the two eras of "1951" and "2021", representing the span of time.

Zidan Tashi is a native of Gyangze County, Xigaze, and his mother is also a teacher.

"My grandmother was born in the 1950s. At that time, the conditions were difficult and there were not many people receiving modern education." He said that with the continuous development of the economy and society, when his generation of "post-90s" entered the society, More than 70% of friends are college graduates.

He introduced that the junior high school class taught by him has 7 classes per week in Tibetan, which accounts for the largest proportion of all courses.

Cidan Tashi believes that education represents the future, and Tibet's future will get better and better.

Tenzin Baima, a sixth-grade girl from Lalu Primary School in Chengguan District, Lhasa, said that the day before, she also visited the 70th Anniversary Achievement Exhibition of Tibet's Peaceful Liberation.

"I feel particularly honored and proud." She said that she had studied the history of Tibet's peaceful liberation in school, and her grandparents would also tell some historical stories at home.

"The people in old Tibet were too bitter. We were born in the new Tibet, and we must cherish our current happy life even more."

On August 18, a central delegation headed by Wang Yang, member of the Standing Committee of the Political Bureau of the CPC Central Committee and chairman of the National Committee of the Chinese People's Political Consultative Conference, flew to Lhasa to attend the celebrations for the 70th anniversary of the peaceful liberation of Tibet.

The central delegation was warmly welcomed by people of all ethnic groups in Tibet at the airport.

Bambaram is a senior judge of the Higher People’s Court of the Tibet Autonomous Region. She said that in the past 70 years, the judicial work in Tibet has been continuously improved. The "court" is gradually "upgraded" to the vehicle-mounted court, with a wide range and wide coverage, and the simultaneous handling of cases.

She said: "In the past, grassroots farmers and herdsmen used to find living Buddhas to resolve disputes. With various forms of law popularization, especially judges go deep into the local area to interpret the law, it has become common to find the law in case of trouble."

Tashi Tsering, 63 this year, is from Lhasa. He has participated in celebrations for the 50th and 60th anniversary of the peaceful liberation of the Tibet Autonomous Region.

He said that his biggest feeling is that Lhasa's urban changes and greening have greatly improved compared with the past.

This old man was born in a peasant family, and the development of Lhasa's urban area has transformed his status as a peasant into an urban resident.

"In the past, farming was only enough to make a living. Now, relying on the village's collective economy and business fronts, life is more prosperous."

Zhang Liwen, from Guangzhou City, Guangdong Province, is a sophomore student at Tibet University. She said that her parents hope her to gain knowledge in the vast world of the motherland and support her to go to Tibet to study.

"Our school has a lot of students like me, living and studying with Tibetan classmates, and the relationship is very harmonious." She said that she likes Lhasa and would like to stay after graduation and contribute her strength to the development of Tibet.