"Due to the inability of a number of Western states": the Russian Federation is ready to provide aviation for the export of Afghans to other countries

Russia is ready to provide its aviation to help transport local citizens from Afghanistan to other countries, said Russian Foreign Ministry spokeswoman Maria Zakharova. She drew attention to the situation at the Kabul airport and the inability of a number of Western countries to organize the export of their diplomats, military personnel and civilians from the republic. According to her, representatives of the new authorities in Afghanistan assured the Russian Foreign Ministry that there are no fundamental obstacles to the arrival and departure of Russian aircraft in Kabul. 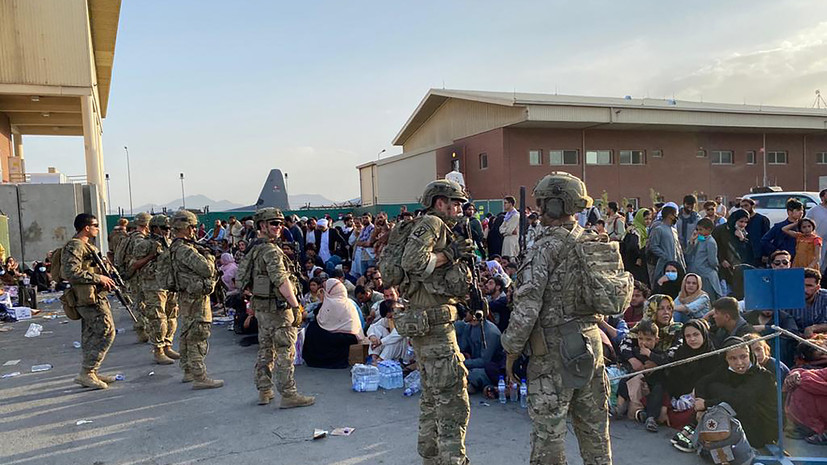 Russia is ready to provide its aviation to help transport any number of local citizens from Afghanistan to other countries.

This was announced at a briefing by the official representative of the Russian Foreign Ministry Maria Zakharova.

She drew attention to the current situation at the Kabul airport and the inability of a number of Western countries to arrange the export of their diplomats, military personnel and civilians from Afghanistan, "not to mention the Afghan citizens who cooperated with them, their families who want to leave the country, but do not have such an opportunity." ...

“In order to prevent the deterioration of the humanitarian situation in Afghanistan, we are ready to provide Russian civil aviation services to ensure the flight of any number of Afghan citizens, including women and children, to any foreign countries that show interest in receiving and accommodating them,” Zakharova said.

According to her, "representatives of the new authorities in Afghanistan" assured the Russian Foreign Ministry that there are no fundamental obstacles to the arrival and departure of Russian aircraft in Kabul.

“The safety of aircraft, crews and passengers is guaranteed, as, I emphasize again, we were assured by the relevant representatives,” she said.

In Afghanistan, according to a foreign ministry official, there are about 100 Russian citizens on the consular register, "mostly ethnic Afghans who studied in Russia or the Soviet Union at different times, acquired families, received citizenship, and returned to their historical homeland."

The consular service of the Russian embassy is focused on working with them and other appeals from Russians.

Most of the appeals relate to requests “to assist in the export to the territory of Russia”, all of them “will be carefully considered”.

Zakharova stressed that the Russian authorities have not made any approving statements regarding the change of power in Afghanistan.

She noted that the coming of the movement to power in Afghanistan is "a reality that the world community will have to take into account" in the course of building further relations with this country.

In addition, in an interview with the Komsomolskaya Pravda radio station, Zakharova commented on the possibility of excluding the Taliban from the list of terrorists.

She noted that this decision will depend on the specific actions and steps of the movement.

The Russian embassy in Kabul posted a message on its Facebook page asking Russians to leave Afghanistan to inform diplomats by the end of the day on August 22.

The embassy also indicated an email address and phone numbers for communication.

“The situation in Afghanistan after the Taliban came to power was thoroughly considered.

Both sides noted the importance of ensuring the security of the civilian population and solving urgent humanitarian problems, ”the statement said.

The Presidents expressed their readiness to make joint efforts to establish peace and stability in Afghanistan.

Putin also discussed the state of affairs in the country with Italian Prime Minister Mario Draghi.

The Kremlin noted that the parties discussed the importance of preventing a humanitarian catastrophe and ensuring the safety of the country's residents.

As Russian Permanent Representative to the UN Vasily Nebenzya emphasized, Moscow will interact in Afghanistan only with those forces that are not associated with terrorists.

We hope that all Afghan parties will refrain from violence and will help resolve the situation,” the diplomat added.

Let us remind you that on August 16, representatives of the Taliban * announced the end of the war in Afghanistan.

Earlier, they occupied the capital of the state - Kabul - and declared that the republic was entirely under their control.

He explained his actions by saying that "he did not want to cause bloodshed in the capital."

At the same time, the official representative of the political office of the Taliban, Mohammad Naim, in an interview with RT Arabic, said that he did not understand what caused the tense situation at the Kabul airport, where thousands of people were trying to leave the country.

In turn, the representative of the movement Wahidullah Hashimi told Reuters that Afghanistan will not be a democratic country and will live according to Sharia law.

The country, he said, will be ruled by a Taliban council.

The head of the organization, Haybatullah Akhundzada, will become the supreme leader.

Taliban officials also announced a general amnesty in Afghanistan, urging citizens, including officials from the previous government, to return to everyday life.

The Russian Foreign Ministry called on all parties in Afghanistan to refrain from violence and to help resolve the situation peacefully.

The ministry stressed that Russian diplomats have established working contacts with representatives of the new authorities to ensure the security of the embassy.

The Russian diplomatic mission in Afghanistan, the Foreign Ministry stressed, is functioning normally.

EU High Representative for Foreign Affairs and Security Policy Josep Borrell said that the latest events in Afghanistan have become a disaster both for the people of this country and for attitudes towards the West around the world.

Meanwhile, the head of the European Parliament's Development Committee, Thomas Tobe, said that now almost 18 million Afghans are in need of humanitarian assistance, and 4 million people have become internal refugees.

At the same time, Maria Zakharova noted on the eve that Moscow was shocked by the reaction of the "democratic world" to the humanitarian crisis in Afghanistan.

She drew attention to the fact that the NATO and EU countries, which over the past 20 years have been "putting things in order" in this state, are now limited only to appeals, and not to specific actions to provide assistance.