A forest fire is raging on the French Riviera near the tourist resort of Saint Tropez. Thousands of locals and tourists have fled the flames. At the same time, the fires in Greece continue to approach the capital Athens. 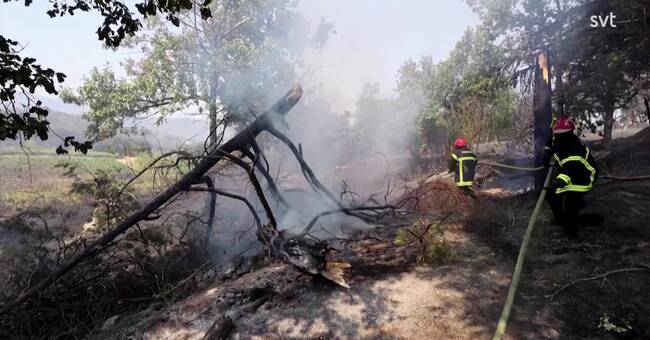 Last week, the heat wave, which in Italy was named Lucifer, swept over the Mediterranean countries.

Several warnings of great fire risk have replaced each other - and now France has also been hit by a major forest fire.

Up to 500 hectares are burning about 40 km inland from Saint Tropez, reports the news agency AP.

The fire started on Monday evening and strong Mediterranean winds have caused a rapid spread.

On Tuesday, the fire is not yet under control.

A thousand tourists evacuated from camping

6,000 locals and tourists have been evacuated from when the smoke and flames began to get closer and closer.

According to France 24, more than a thousand tourists have had to leave a campsite in the village of Bormes les Mimosa.

"We have never seen a fire spread at such a rate, it was three or four times the norm," Thomas Dombry, mayor of the village of La-Garde-Freine, told AFP.

More than 900 firefighters are fighting the fire, including water bombing from aircraft and helicopters.

According to the rescue service, no one was killed, but at least 22 people were affected by smoke inhalation or minor fire-related injuries.

Authorities are urging evacuees not to return to their homes.

French President Emmanuel Macron interrupted his holiday in the nearby area to thank the firefighters for their efforts.

- Absolutely terrible when it comes to biodiversity and natural heritage ... but life has been protected.

Climate change will lead to more similar fires, he said in a statement.

The fires in Greece, which started in early August, are not yet under control.

Instead, new fires have broken out in villages not far from the capital Athens, reports AP.

On Monday, a fire started in the town of Vilia, just over 40 km outside Athens.

Shortly afterwards, another fire broke out in the southeastern part of the Keratea area, just 30 km from Athens city center.

In addition to these two fires, there are also a dozen more.

The intense heat has led to severe forest fires in several countries around the Mediterranean in recent weeks. In Algeria at least 75 people have died and in Turkey 16. Italy has also seen several fire-related deaths. Deteriorating drought and heat have also caused forest fires in other parts of the world this summer, including in the western United States and in Russia's northern Siberia.