While poor countries are "lack of vaccines", millions of vaccines are wasted in the world?

While poor countries are "lack of vaccines", millions of vaccines are wasted in the world?   "Vaccine unfairness is the biggest obstacle to ending this new crown pandemic and recovering from it." World Health Organization Director-General Tan Desai emphasized in a recent statement. On August 9, local time, in Canada, inbound passengers were preparing to leave the terminal. Photo by China News Ag 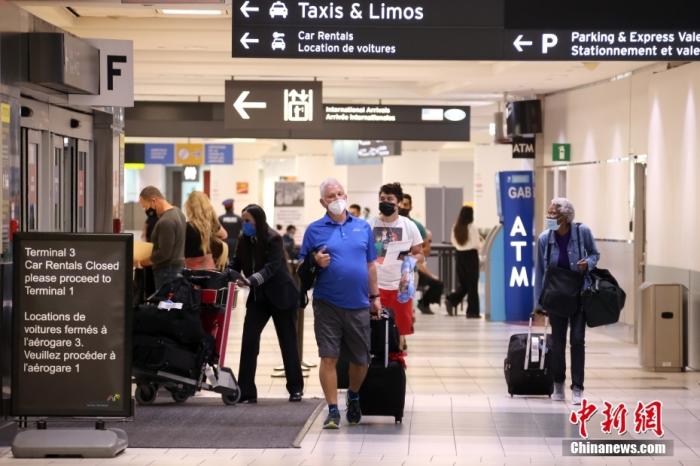 While poor countries are "lack of vaccines", millions of vaccines are wasted in the world?

"Vaccine unfairness is the biggest obstacle to ending this new crown pandemic and recovering from it." World Health Organization Director-General Tan Desai emphasized in a recent statement.

On August 9, local time, in Canada, inbound passengers were preparing to leave the terminal.

However, in the face of the "gap" in vaccine stocks between rich countries and developing countries, the former has caused millions of vaccines to expire and wasted due to the decline in domestic people's vaccination; while the latter is still struggling with the spread of the epidemic and is deeply trapped in a lack of vaccines and vaccines. On the verge of expiration but difficult to distribute.

"No one has systematically tracked how many vaccines have expired." Prashant Yadav, a medical service supply chain expert at the US think tank "Global Development Center", told the media.

However, from the existing news reports and official statements, it can be seen that the expiration and waste of vaccines has become a problem that cannot be ignored.

Jenny Ottenhof, senior policy director for global health and education at the non-profit organization ONE Campaign, predicted to the National Public Radio (NPR) that in the next few weeks or months, the total number of expired vaccines and vaccines that are about to deteriorate in the United States will be Up to millions of doses.

"I feel angry, upset, and disappointed." Arkansas Health Secretary Romero told NPR, "Although we are working very hard to promote vaccination, the public is reluctant to vaccinate, which is very disappointing. If you look at it from a global perspective, Millions of people around the world are affected by the new crown epidemic, and we are discarding vaccines.” In July, Arkansas said it discarded 80,000 doses of vaccine.

For these developed countries that waste vaccines in large quantities, why they did not ship excess vaccines to countries lacking vaccines has become one of the main controversies in their behavior.

Govind Perthard, a professor at the University of Denver School of Law, told NPR that in terms of the division of administrative power in the United States, the states of the United States cannot bypass the federal government and send their excess vaccines to countries in need.

However, Persad believes that federal officials should be able to allow states to take this approach legally.

In addition, storage conditions during the transportation of vaccines are also one of the considerations.

According to the "Washington Post" report, due to legal and logistical considerations, the Dutch government does not allow the country's surplus vaccines to be exported abroad.

In this case, statistics from the Global Alliance for Vaccines and Immunization (GAVI) show that the wastage rate of new crown vaccines usually exceeds 10%, and sometimes even much higher.

Why do poor countries that are “lack of vaccines” discard vaccines?

It is worth noting that not only in rich countries, but also in poor countries where vaccine reserves are already in short supply, vaccines have expired and were wasted.

Statistics from the World Health Organization show that as of August 9, 469,000 doses of vaccines from different manufacturers in Africa have expired.

In addition, only 3.8% of sub-Saharan Africans aged 12 years or older received the first dose of the new crown vaccine, which is far below the world average of 50%.

Why is there waste in poor countries where vaccines are in short supply?

"The Economist" reported that most of the vaccines obtained early in Africa arrived at their destinations when they were nearing their expiration date.

According to Richard Mishigo, the immunization and vaccine development planning manager of the WHO Regional Office for Africa, in the whole of Africa, the delivery period of vaccines in most countries is roughly three to four months, but shipping delays have also forced some countries not to There should be no shorter distribution cycle.

Previously, Liberia had only 15 days to distribute more than 10,000 doses of AstraZeneca vaccine from the African Union.

In the end, roughly 27,000 doses of the vaccine that failed to be dispensed expired.

The country’s health minister explained: “We don’t have enough time to distribute the vaccine before it expires.”

At the same time, the low-temperature storage conditions required for vaccines also pose challenges to many poor countries.

A survey conducted by the World Health Organization in July found that nearly one-third of African countries still have gaps in cold chain transportation in more than half of their regions.

In order to solve the problem of vaccine distribution in poor countries, the World Bank has now approved nearly US$1.85 billion (approximately RMB 11.99 billion) in donations to African countries.

However, the Economist estimates that the cost of promoting vaccines in sub-Saharan Africa may be as high as $12.5 billion.

However, even if the problem of vaccine distribution is resolved, the fundamental problem of lack of vaccine supply still exists.

WHO estimates that if more vaccines cannot be provided, 90% of African countries will not be able to achieve the goal of vaccinating 10% of the population by September this year.

"If you want to distribute the vaccine, you first need to get the vaccine." Richard Mishigo said frankly.