Suizhou, Hubei: Make every effort to search for and rescue missing personnel

China News Service, Suizhou, Hubei, August 14 (Reporter Guo Xiaoying and Dong Xiaobin) The Information Office of the People's Government of Suizhou City, Hubei Province held a press conference on the evening of the 13th to introduce the city's flood prevention and disaster relief situation. Gan Guodong, member of the Standing Committee of the Suizhou Municipal Party Committee and Executive Deput 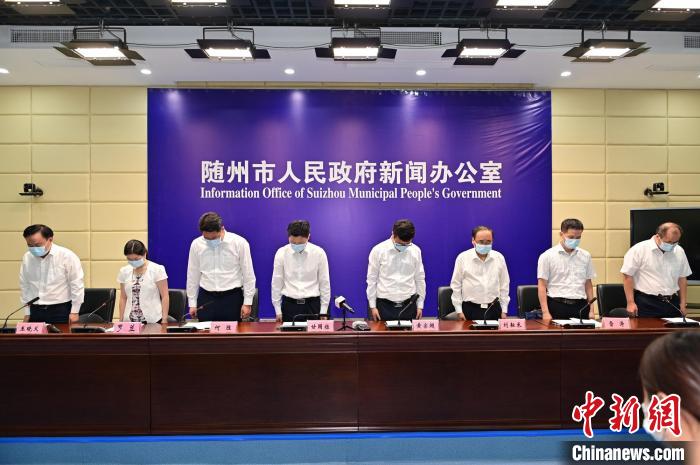 Gan Guodong, member of the Standing Committee of the Suizhou Municipal Party Committee and Executive Deputy Mayor, said that he will do his best to search and rescue lost contacts, properly arrange the disaster victims, and solidly carry out post-disaster reconstruction and other key tasks, and strive to minimize the impact of the disaster.

From the evening of August 11th to the morning of August 12th, some areas of Suizhou experienced extreme heavy rainfall. Liulin Town, Hongshan Town, Changgang Town in Suixian County, Hedian Town, Luoyang Town in Zengdu District and other towns were severely affected by the disaster. Caused heavy casualties and property losses.

Before the official start of the press conference that night, all the staff stood up and mourned the unfortunate victims of the flood.

According to a report from the Suizhou City Emergency Management Department, there are currently 92,800 people affected by the disaster in the city. The disaster caused 21 deaths and 4 lost contact in Liulin Town, Sui County.

In the city, 496 houses collapsed and 810 houses were seriously damaged due to the disaster. The area affected by crops was 197,900 mu and the area was 88,000 mu. A large number of roads, bridges, dams, weir ponds, channels, etc. were damaged.

A silent tribute to the unfortunate victims in the flood.

After the disaster, various rescue forces at all levels quickly put in rescue and disaster relief, urgently rescued the trapped people, and simultaneously carried out emergency rescue, investigation and search and rescue, and conducted multiple rounds of household inspections of the disaster-stricken people in Liulin Township and nearby villages.

Up to now, the city has safely transferred and resettled more than 5,000 trapped people, and promptly organized more than 6,500 people in the lower reaches of Baiguohe Reservoir in Hedian Town, Zengdu District to transfer and avoid danger.

At the same time, the dispatching of 262 reservoirs exceeding the flood limit water level will be strengthened, and dangers will be investigated and eliminated quickly.

After emergency treatment, the Baiguohe Reservoir has now fallen below the design flood level.

According to Huang Zongchao, deputy secretary of the Suixian County Party Committee and acting county magistrate, three comprehensive investigations have been urgently carried out on Liulin Township, and safety assessments of flooded houses have been organized to prevent secondary disasters.

At the same time, five key villages including Yuanzihe Village near the township were organized into households.

Up to now, all the villages under the jurisdiction of Liulin Town have completed the project.

The flooding disaster was inundated and damaged more than 2,700 houses and shops (including 221 collapsed), destroyed 63 bridges and culverts, 11.3 kilometers of roads, 725 power communication poles, damaged 19,500 acres of farmland, and lost 3,890 acres. More than 500 livestock.

There are more than 8,000 people affected by the disaster in Liulin Town. At present, a centralized resettlement site has been set up, 68 rooms, 26 tents have been set up, 560 centralized resettlement beds, and more than 300 people have been resettled. In order to protect the daily life of the affected people, instant noodles, bread, mineral water, masks and other daily necessities have been urgently dispatched. (Finish)