Anti-pass demonstrations: fifth mobilization weekend in France Paris (AFP) They do not disarm: opponents of the health pass take to the streets on Saturday for a fifth weekend in a row with more than 200 events planned in France, a few days after the device was generalized in most public places. The authorities expect to see "about 250,000 demonstrators" marching across the country, a police source told AFP. They were just over 237,000 last week, according 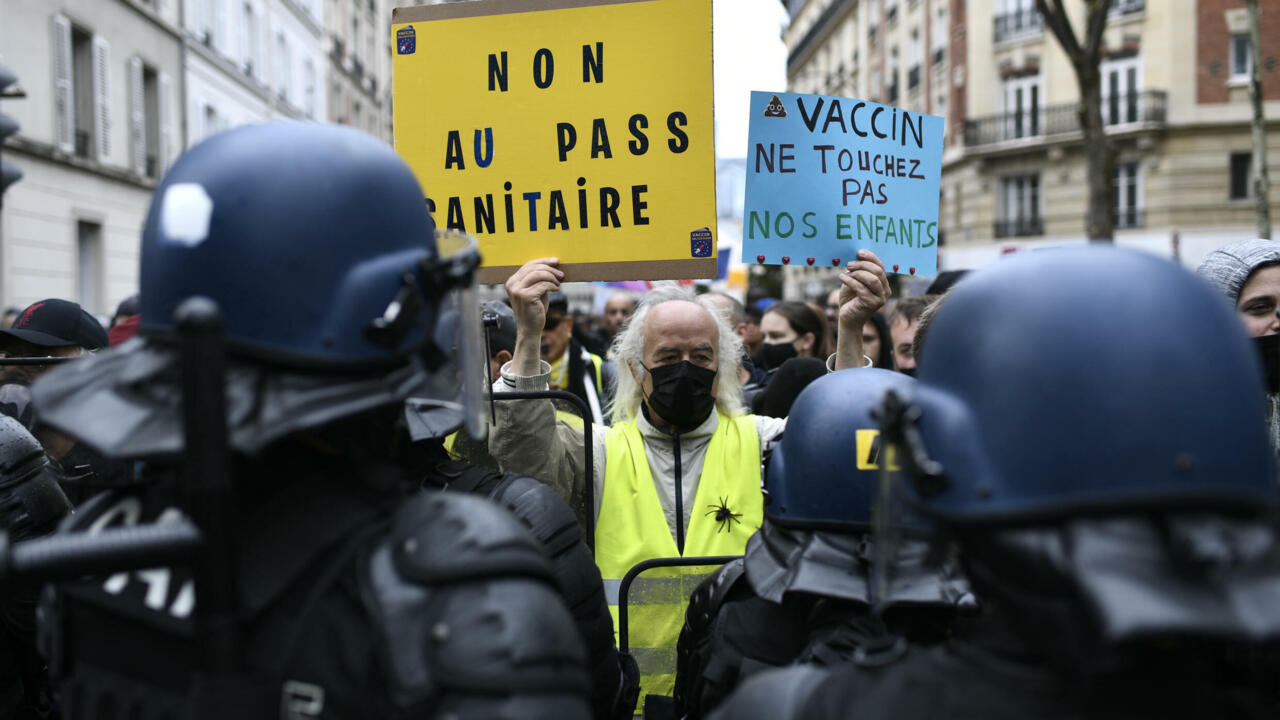 They do not disarm: opponents of the health pass take to the streets on Saturday for a fifth weekend in a row with more than 200 events planned in France, a few days after the device was generalized in most public places.

The authorities expect to see "about 250,000 demonstrators" marching across the country, a police source told AFP.

They were just over 237,000 last week, according to the Interior Ministry, more than double the scale of the movement's beginnings in mid-July.

Unprecedented in the middle of summer, the protest continues to grow.

Without major incident so far, it attracts a diverse audience - families, apolitical first-time demonstrators, caregivers or uniformed firefighters - which goes beyond the anti-vaccine or conspiracy movement alone.

In several cities, the movement is presented in dispersed order.

Particularly in Paris, where the presence of the far right has hitherto prevented the creation of a common front.

A first demonstration, organized by the former figure of the National Gathering Florian Philippot and his Patriots movement, will start from the Place de la Catalogne around 2:30 pm.

The other big parade, declared by "yellow vests", will start from the Porte Dorée around 1:00 pm.

A third will start at Place de la Bourse around 1:30 p.m.

Outside Paris, the most important processions are expected in the south, where Toulon, Montpellier, Nice, Marseille or Perpignan have emerged as major centers of dispute.

Since Monday, the health pass has been imposed in most public places.

Bars, restaurants, cinemas, long-distance transport, museums or hospitals require this QR code which testifies to a complete vaccination against Covid-19, a negative test or a recovery from the disease.

Faced with this generalization of the device, validated by the Constitutional Council, the demonstrators denounce an obstacle to their "freedom" or a "lack of perspective" on vaccines.

Some cry out for a "health dictatorship" and others, sometimes themselves vaccinated, reject this term but regret a "disguised vaccination obligation".

These accusations annoy the government, faced with a deadly explosion of the epidemic in Guadeloupe and Martinique.

Especially since a fringe of the movement assumes an uninhibited anti-Semitism, while some vaccination centers or pharmacies are treated as "collaborators" and victims of malicious acts.

A teacher will be tried in September for holding up a sign targeting Jewish figures in Metz last Saturday.

From the reconfigured Martinique, the Minister of Health Olivier Véran castigated Thursday a movement "about which we talk too much", and which sports "extremely colorful signs and sometimes extremely dubious, or even completely dirty reasons."

"How will we look at the collective attitude that we will have had during this period of the Covid?", He criticized.

"While hospitals are filling up, we are still wondering whether we wait before going to be vaccinated?"

The executive still hopes to convince the undecided to achieve the goal of 50 million French people having received a first injection at the end of August, by brandishing the catastrophic situation in the West Indies as a foil.

Vaccination is three times lower there than in metropolitan France and the epidemic outbreak caused by the Delta variant is "proof by example" of the urgency to be vaccinated, according to Prime Minister Jean Castex.

These overseas departments offer a "cruel demonstration" of the value of vaccines, added Emmanuel Macron on Wednesday, fully assuming the generalization of the health pass.

"It was either that or the closure of the country," he said.

The dialogue of the deaf between protesters and government could continue beyond the holidays.

In the processions, many protesters are worried about a hypothetical obligation to vaccinate children to go to school, and a national demonstration already scheduled for September 4.