"Targeted transportation": how the authorities of Poland and Lithuania expel migrants to Belarus

The Belarusian authorities reported that Poland began to deliver illegal immigrants to the country's border. According to the State Border Committee of the republic, one of these incidents occurred near the outpost of Belyany in the Grodno region. Earlier, attempts to expel refugees to Belarus took place on the border with Lithuania. Moreover, the Baltic border guards often used violence against foreigners, forcing them to leave the country. Despite this, the EU authorities ignore the facts of abuse of illegal immigrants. Experts believe that Brussels de facto condones the policy of Warsaw and Vilnius on the migration issue, hoping in this way to create a new lever of pressure on Minsk. 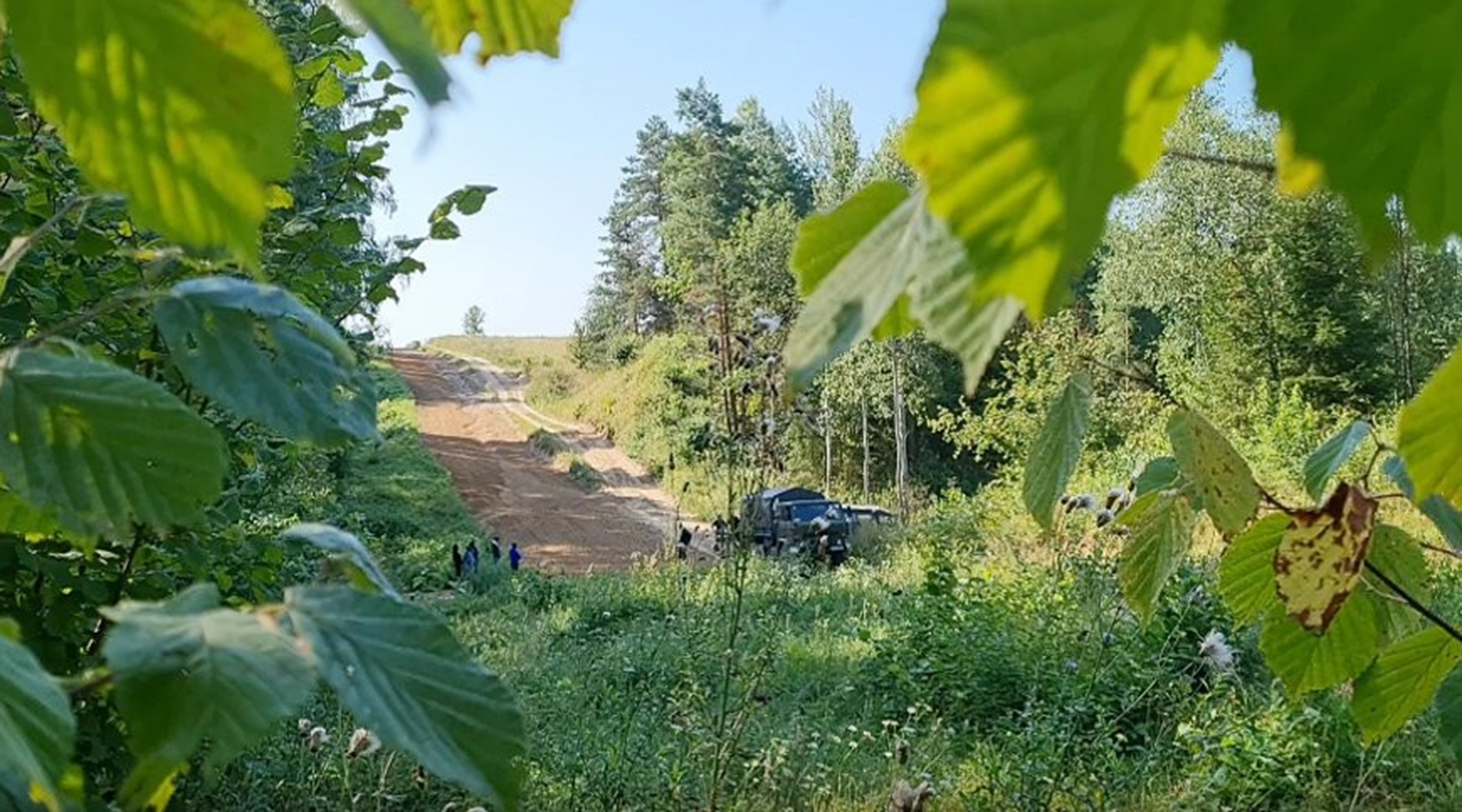 The State Border Committee (CPC) of Belarus said that Poland has begun to deliver migrants to the Belarusian border.

One of the incidents near the Beliany border outpost (not far from Grodno) was reported by the press service of the department.

“Today, August 13, a group of foreigners was brought to the Belarusian border from Poland in an organized manner.

The incident occurred at the section of the Belyany frontier post.

It is worth noting that the car (which delivered foreigners to the border. -

) of this type is not used by Polish border guards, but belongs to the Polish Armed Forces, ”the website of the CPC says.

The footage of the video, which was distributed by the Belarusian border guards, shows a group of refugees with a dark skin color emerging from a dark green truck.

The Belarusian authorities have not yet commented on the intentions of the Polish side.

However, experts interviewed by RT are inclined to believe that Warsaw, known for its tough attitude towards illegal migration, is trying to get rid of refugees by sending them towards Belarus.

This country, despite its membership in the EU, strives to remain a mono-ethnic state.

Migrants, of course, interfere with this, and therefore Warsaw is not shy about choosing ways to expel them, ”Sergey Margulis, a senior lecturer at the Department of International Politics and Foreign Regional Studies at the Institute of Social Sciences, RANEPA, explained in an interview with RT.

"Under the threat of the use of weapons"

Recently, the Polish authorities regularly report the detention of dozens of refugees crossing the border from Belarus, and believe that Minsk is deliberately contributing to an increase in the influx of illegal immigrants.

Similar accusations are made in neighboring Lithuania.

In early August, the heads of government of Poland and Lithuania made a joint statement in which they called illegal migration "a weapon of political pressure from the Lukashenka regime on the EU and its individual member states."

In this regard, the prime ministers of the two republics called on Brussels to toughen sanctions against Minsk.

According to Margulis, Warsaw and Vilnius pursue the same goal in the migration issue and try to coordinate their actions.

“Both countries have never faced such an influx of migrants before.

Ideally, they want to receive from the EU minimum quotas for granting asylum to illegal immigrants.

At the same time, Poland and Lithuania turned this situation into an additional reason for pressure on the official Minsk, claiming that it was sending refugees to them on purpose, ”Margulis explained.

President of Belarus Alexander Lukashenko does not deny the problem of an influx of migrants striving for Europe, however, he rejects suspicions that illegal immigrants are being “thrown over”.

At a meeting with journalists and members of the public on August 9, he demanded that neighboring countries put the relevant "facts on the table."

“Yes, we caught almost everyone.

) say, 80 people have crossed this border.

Now during this time - about five thousand.

They do not know what to do with them ... So they are now making a noise, ”Lukashenka said.

At the same time, the Belarusian leader added, Lithuanians often allow themselves to behave unceremoniously near the border.

As Lukashenka said, the security forces of the neighboring state “insolently” drive up to the border in cars, trying to violate it and provoke a conflict with the officers of the State Criminal Procedure Code.

According to Petr Petrovsky, an employee of the Institute of Philosophy of the National Academy of Sciences of Belarus, incidents with the delivery of migrants to the Belarusian border have occurred before, and often illegal immigrants have been victims of violence by representatives of Lithuania.

“Lithuania's actions in this regard are appalling.

Although the obligations within the EU involve the safe placement of illegal immigrants and the subsequent civilized consideration of their documents and applications for asylum.

According to the CPC, several alarming incidents occurred in the second half of July in the area of ​​responsibility of the servicemen of the Geraneny outpost of the Lida border detachment.

Thus, the officers of the Criminal Procedure Code found persons who introduced themselves as citizens of Iraq.

They said that when they were on the territory of Lithuania, local security officials beat them with truncheons, did not give them food or water, demanding testimony “about bribing Belarusian border guards for helping to violate the border”.

“Immediately after the interrogation, as the Iraqis explained, the law enforcement officers brought them to the state border and, under the threat of the use of weapons, forced them to leave for the territory of Belarus,” the CPC said.

On August 4, BelTA, citing border guards, reported the death of a young man of non-Slavic appearance, who was discovered in the vicinity of the village of Benyakoni (Grodno region).

Belarusian servicemen tried to provide the man with first aid, but he died on the spot.

Later, a group of 32 people was seen at the site of the Klevitsa border post in the Grodno region: the Lithuanians brought them to the border, and then, using physical force and threatening with weapons, they were forcibly taken to the section of the border with Belarus.

“The representatives of the Lithuanian border service, having seen the outfit from the Belarusian side, waited some time and took away part of the group of migrants.

We believe that Lithuania follows the tactics of purposeful transportation of groups of refugees from one area to another, ”the State Border Committee of Belarus emphasizes.

On August 10, the press service of the CPC posted a video showing how Lithuanian border guards carry an unconscious pregnant woman on an improvised cloth stretcher and leave her at the border line.

The department qualified the actions of the Lithuanian colleagues as "deliberately leaving a person in danger without the possibility of receiving the necessary medical assistance."

“Bodies of the border service provided first aid on the spot.

A foreign woman in grave condition was taken to the Postavy Central Hospital.

Her condition is assessed as severe, characterized, among other things, by signs of exhaustion.

In addition, three children were with her in Lithuania, who were also taken to a medical facility for examination, ”the website of the State Border Committee of Belarus notes.

The CPC stressed that the behavior of the Lithuanian security forces contradicts "all laws and human values."

During a meeting with journalists, Lukashenko called the Lithuanian security officials "scoundrels" who scoff at migrants and forcibly force them to leave for Belarus.

The man is dying.

Here he lies on the border.

We cannot approach, because he is running from there.

We cannot violate the border ... What is it when a person dies in front of your eyes and asks for help? "

- said Lukashenko, talking about one of the cases of the aggressive expulsion of a refugee to Belarus.

"Division of migrants into varieties"

According to Minsk, the actions of the Lithuanians "are aimed exclusively at concealing the facts of the illegal expulsion of foreigners seeking to enter the European Union."

At the same time, European human rights activists ignore the facts of the cruelty of the Lithuanian authorities.

The situation has not changed after the visit to Lithuania by European Commissioner Ilva Johansson.

A guest from Brussels arrived in the republic in early August to assess the situation with illegal immigrants.

“Johansson visited Lithuania when cases of abuse of migrants by Lithuanians were already known, and did not say a word about the tragic incidents.

By the way, in Greece, she condemns manifestations of a tough attitude towards refugees, but turns a blind eye to the inhuman policy of Poland and Lithuania, actually conniving at violence, ”Piotr Petrovsky stressed.

According to the expert, Brussels demonstrated "the division of migrants into varieties" by such behavior.

For refugees who come from the south, the EU authorities intercede, and with illegal immigrants breaking through from Belarus, they are allowed to treat as they like, says Petrovsky.

“Such snobbery of the EU is an integral part of the struggle against the official Minsk.

With a similar attitude to the problem, Brussels has once again confirmed that human rights for him are just an ideological club for those who disagree with his policy, ”the expert said.

Sergei Margulis also drew attention to the double standards of the EU policy on migration issues.

According to him, Brussels is well aware that the influx of illegal immigrants from Belarus is incomparable with the number of refugees arriving in southern European countries.

However, Brussels prefers to put more pressure on Minsk.

“In fact, the main migration threat for the EU is in the south. This is evident from the number of migrants arriving there. What we are seeing now is a manifestation of double standards and hypocrisy of Brussels, which gives carte blanche to Lithuania and Poland for practically any measures against migrants, just to complicate the life of Belarus, ”concluded Margulis.