The heat wave Lucifer continues to dominate with its high pressure over the fire-stricken Mediterranean countries. On Thursday, new warnings were issued about the great risk of fire in Spain and Portugal - and in Tunisia, children have died of thirst. - We are not spared from this danger, says Pedro Sánchez, Spanish Prime Minister. 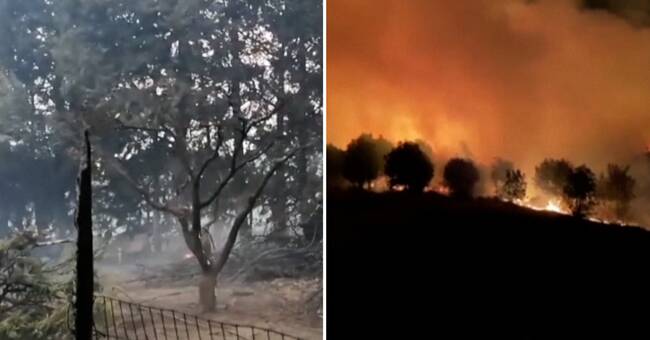 The high pressure, which in Italy has been named Lucifer, is heavy over the Mediterranean.

During Thursday, temperatures around or above the 40 mark could be measured in both Italy and Spain.

Forest fires continue to rage in several countries - at the same time as the record heat also leads to deaths from dehydration.

If the listing is correct, it is the warmest temperature ever in Europe.

In Sardinia it is 40 degrees and in Rome the temperature is 38 degrees.

At the Colosseum, volunteers handed out hundreds of bottles of water to visitors.

In Spain, the fire risk is judged to be high in all but three of Spain's 17 regions.

For the first time in over 100 years, temperatures above 40 degrees have been recorded three days in a row in Madrid - and there are warnings of even higher temperatures.

The national weather service says that it can be up to 44 degrees in some areas in the next few days.

"Such high temperatures increase the risk of needing hospital care, in some cases the heat can even require death," Hicham Acheback, a researcher at the Barcelona Institute for Global Health, told El País.

He believes that the elderly and the sick are particularly vulnerable, but that simple means such as drinking plenty of water and staying indoors are effective.

In Portugal, warnings were issued in the central and northern parts of the country, while the southern tourist region of the Algarve was judged to have the highest possible risk of forest fires.

After almost two weeks of extensive fires, the situation is still grim in Greece.

Prime Minister Kyriakos Mitsotakis describes the fires as the worst ecological disaster the island nation has suffered in decades.

At least three people have died, hundreds have become homeless and thousands have been forced to flee their homes from the fires.

Four children were found dead in the desert

The situation is even worse on the other side of the Mediterranean.

Six migrants, including four children, have died of thirst in Tunisia's part of the Sahara desert near the border with Algeria, according to AP reports.

In Tunisia, the temperature on Wednesday reached a record high of 50 degrees, according to the national weather service.

And the death toll continues to rise in Algeria, where national mourning has been announced.

At least 69 people have now died in the fires that are raging in the northern part of the country, state television reports.