From Shikumen in Shanghai to South Lake in Jiaxing, a small red boat carries the trust of the people and the hope of the nation. It has crossed the rapids and turbulent waves, and has become a giant ship that leads China's steady and long journey.   Why can the Chinese Communist Party succeed and how can it continue to succeed? One of the important reasons is to continuously consolidate and dev 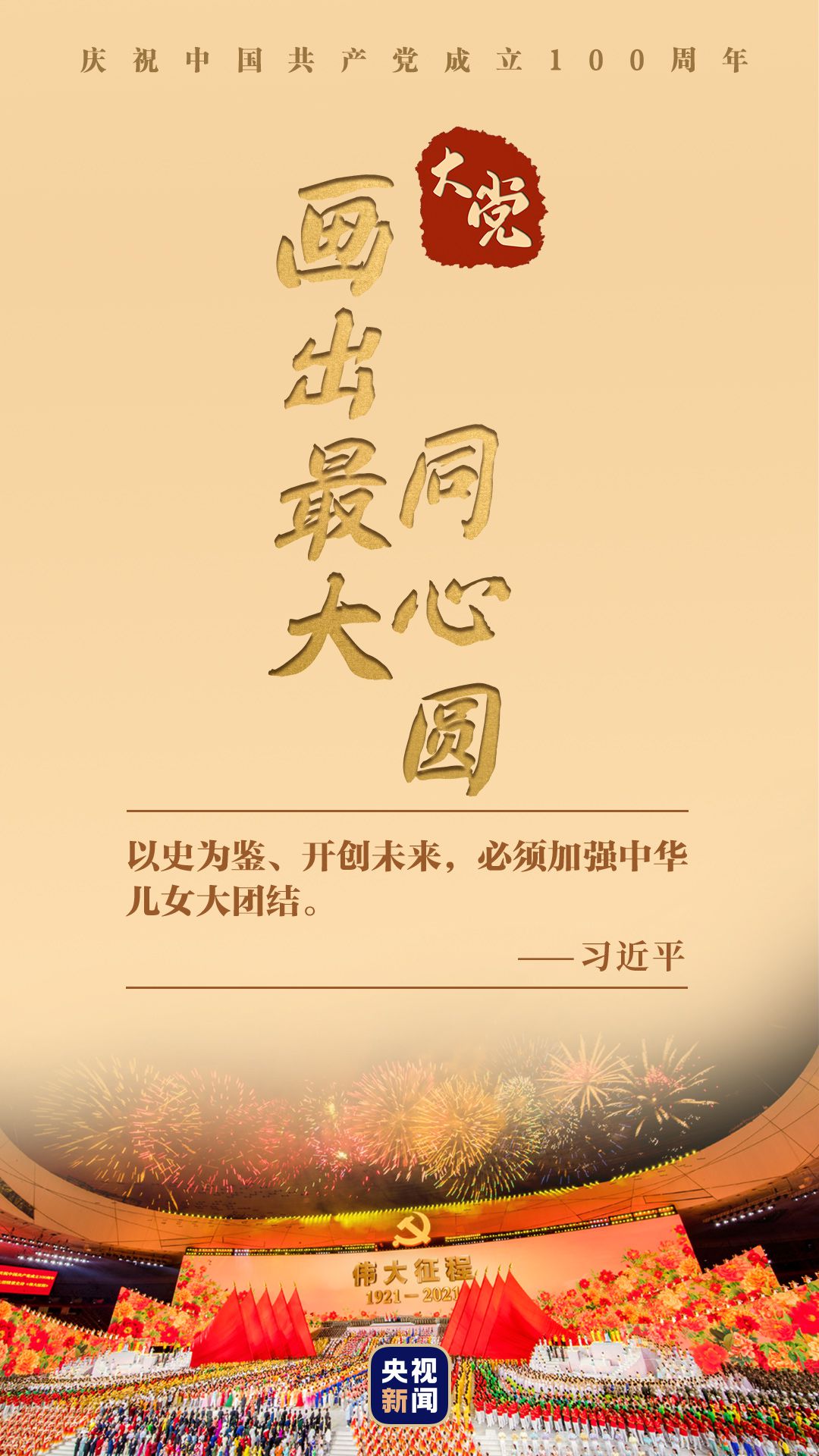 From Shikumen in Shanghai to South Lake in Jiaxing, a small red boat carries the trust of the people and the hope of the nation. It has crossed the rapids and turbulent waves, and has become a giant ship that leads China's steady and long journey.

Why can the Chinese Communist Party succeed and how can it continue to succeed?

One of the important reasons is to continuously consolidate and develop the broadest united front and realize great unity.

"On the new journey, we must persist in great unity and unity, persist in consistency and diversity, strengthen ideological and political leadership, broadly build consensus, gather talents from all over the world, strive to find the greatest common divisor, draw the largest concentric circle, and form a sea. The lively situation of all the Chinese people inside and outside who thinks together and makes every effort to bring together the majestic power to realize national rejuvenation!"

It's up to The communist party to do thing well in China.

To unite the Chinese people at home and abroad and draw the largest concentric circle, we must unswervingly adhere to the leadership of the Communist Party of China.

Looking forward to the future, as long as the entire party and people of all ethnic groups unite more closely around the Party Central Committee with Comrade Xi Jinping at the core, there will be no difficulty that can stump us, and no force can stop the sonorous pace of the Chinese nation’s great rejuvenation.

To unite everyone together, it is necessary to lead thoughts and build consensus.

In 1922, only one year after the founding of the Communist Party of China, it put forward a clear anti-imperialist and anti-feudal democratic revolution program for the first time, and quickly spread this program. "Down with the great powers and eliminate the warlords" became the common voice of the masses. .

"Correctly understand the current economic situation, unify thoughts and actions with the analysis, judgment, and decision-making deployment of the Central Committee of the Communist Party of China on the current economic situation. The members and the people they contact inherited and carried forward the fine tradition of the older generation of non-party personalities and the Communist Party of China in close cooperation through storms and hardships, and gathered the strength of common struggle to the maximum extent." On July 28 this year, General Secretary Xi Jinping presided over the non-party personalities forum. When stressed.

In the first half of this year, closely focusing on the work of the party and the state, the democratic parties, federations of industry and commerce, and people without party affiliation conducted investigations and studies in more than 10 provinces, autonomous regions and municipalities, and formed a series of high-quality research results, which contributed to the scientific and effective decision-making of the CPC Central Committee. The policy implementation provides an important reference; the deployment and launch of a new round of special democratic supervision work, the supervision of the ecological environment of the Yangtze River, and the promotion of the implementation of the CPC Central Committee’s decision-making deployment; the launch of the "Ten Thousand Enterprises to Rejuvenate Ten Thousand Villages" action to promote rural revitalization and promote the Federation of Industry and Commerce Reform and development of affiliated chambers of commerce.

Practice has fully proved that the united front is the political advantage and strategic policy of the Communist Party of China to unite people's hearts and gather strength, an important magic weapon for winning the cause of revolution, construction, and reform, and an important magic weapon for comprehensively building a modern socialist country and realizing the great rejuvenation of the Chinese nation. .

"Unity is strength, this strength is iron, this strength is steel, harder than iron, stronger than steel... Toward the sun, toward freedom, and toward the new China, shining ten thousand feet away." This song born in the smoke of gunpowder is now It has a new era connotation.

Since the reform and opening up, Hong Kong Maxim’s Group signed a contract with the Beijing Administration of Civil Aviation of China to establish the first joint venture in the Mainland; Hong Kong industrialist Hu Yingxiang invested in the construction of the Guangzhou-Shenzhen Expressway, and the Mainland has the first joint-venture expressway; American nationals The Chinese Chen Xuanyuan flew dozens of times across the oceans to Beijing for business talks and built the first joint-venture hotel in the mainland...The majority of Hong Kong, Macao and Taiwanese compatriots took the lead in returning to the mainland of the motherland to invest and start business, bringing the "first pot of gold" to the development of China, which has just opened its doors. Advanced technical equipment and management concepts.

As long as more than 1.4 billion Chinese people continue to carry forward this great spirit of unity, "we will definitely be able to form a powerful force that will move forward courageously and invincibly!"

In today's world, major changes unseen in a century are accelerating, and the realization of the great rejuvenation of the Chinese nation is in a critical period.

The closer to the goal, the more complex the situation and the more arduous the task. The more we must give full play to the political advantages of the Communist Party of China and the institutional advantages of socialism with Chinese characteristics, and unite the wisdom and strength of all aspects, and form a unity of the Chinese people at home and abroad. Think everywhere and make a strong force together.

On the new Long March of building the Chinese dream together and forging ahead hand in hand in the new era, the Chinese people will unite and help each other, and will continue to create new great brilliance that belongs to the Chinese nation.