New York Governor Cuomo after allegations of harassment: "I will resign within two weeks" 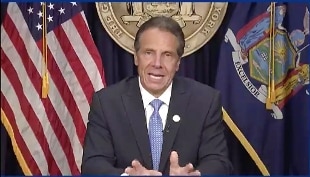 "I will quit in two weeks. I have never touched anyone inappropriately or intentionally made inappropriate sexual advances. I am 63 years old. I have lived my entire adult life in public. That's not who I am," the governor said. of New York, Andrew Cuomo, in a press conference in response to the report from the state attorney general's office, which denounced sexual harassment of at least 11 women and a hostile work environment for women. "I apologize and I take my responsibilities, but there are other political agendas," added Cuomo.

A native of Buffalo, she was first elected Deputy Governor of New York in 2014 and won re-election alongside Cuomo in 2018.

Andrew Cuomo's report of sexual harassment "contains errors and omits key elements," said New York Governor's attorney pointing the finger at Attorney General Letitia James' investigation. : "The investigators acted as if they were the prosecutor, the judges and the jury."