During the packaging of the Arc de Triomphe, the visits continue - France 24

During the packaging of the Arc de Triomphe, the tours continue Paris (AFP) Two red cranes deployed to the top, the sculpted groups protected under trellises, dozens of busy technicians, but also numerous visitors: during the preparations for its packaging, Christo's posthumous work, the Arc de Triomphe remains open and the flame rekindled each evening at the tomb of the Unknown Soldier. From September 18 to October 3, the childhood dream of the Bulgarian vi 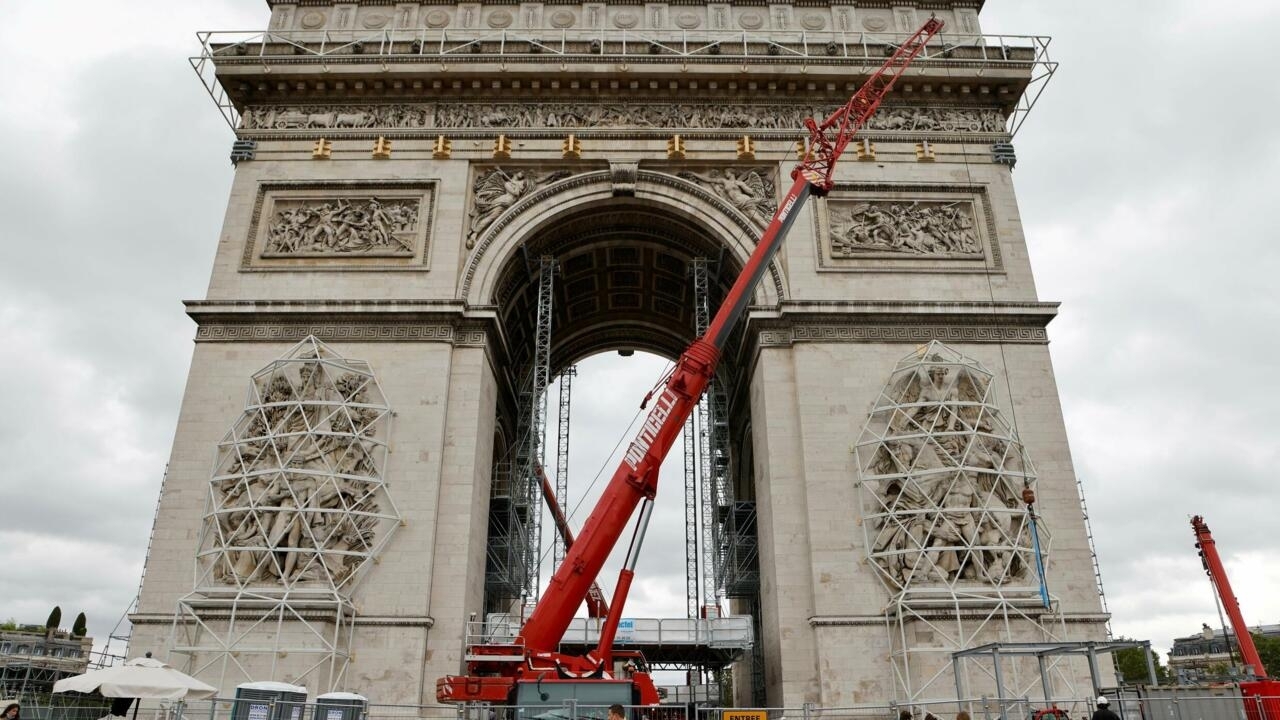 Two red cranes deployed to the top, the sculpted groups protected under trellises, dozens of busy technicians, but also numerous visitors: during the preparations for its packaging, Christo's posthumous work, the Arc de Triomphe remains open and the flame rekindled each evening at the tomb of the Unknown Soldier.

From September 18 to October 3, the childhood dream of the Bulgarian visual artist who died in May 2020 and his wife Jeanne-Claude, will be realized: a major place of French commemorations, the Arc de Triomphe, 50 meters high, will be completely covered with 25,000 m2 of recyclable fabric in bluish silver polypropylene, undulating with the elements, held by 3,000 meters of red rope.

In 1985, Christo had already packed the Pont-Neuf, one of the bridges spanning the Seine.

Started at the end of June, preparations to package the famous monument are continuing at a steady pace under the leadership of Vladimir Javacheff, Christo's nephew, in accordance with his uncle's very specific wishes, with the enthusiastic support of the National Monuments Center.

The sculpted groups of the Arc de Triomphe, in Paris, are protected by a trellis during the work to prepare the packaging of the monument, August 4, 2021 STEPHANE DE SAKUTIN AFP / Archives

"It will be like a living object which will come alive in the wind and reflect the light. The folds will move, the surface of the monument will become sensual", explained Christo while presenting his final project, two years before his death.

As early as 1962, Christo and Jeanne-Claude had signed a photomontage with the Arc de Triomphe packaged, an idea arises while looking at the monument from their first Parisian apartment, avenue Foch.

At the moment, the "gift package" is not visible.

The canvas will be deployed in the very first days of September.

The three teams who take turns 24 hours a day, including members of the Charpentiers de Paris, set out to install the canvas fixing points, without any damage to the monument, using wooden glides.

At a cost of 14 million euros, the project is entirely self-financed, without public subsidy, thanks to the sale of original works by Christo, preparatory drawings, souvenirs, models and lithographs.

"You see the cable that is being installed: it pulls the canvas backwards and the strings on top to hold it like a belt," the artist's nephew tells AFP.

"It was Christo's wish that we complete the project."

“When this is done, you will just think that we put a cloth on the top and put some ropes, and that the whole was tied like a Christmas present!” Explains Vladimir Javacheff.

"Christo and Jeanne-Claude would say that we have love and tenderness for childhood, because it does not last. When we know that something is only there for a very short time, we treat it. in a different way, ”he adds.

For Bruno Cordeau, administrator of the Arc de Triomphe, "supporting the installation of a work like this, in the circumstances which are those of today, is magic!".

"The packaging of the Pont-Neuf was a timeless moment. This is what we are about to experience once again here. We are ensuring that the Arc de Triomphe is properly protected, d 'as long as the monument remains open to the public, "adds Mr. Cordeau.

"The Arc de Triomphe is not a monument like any other. It is that of national harmony. It is also a place of culture. Christo's work has the elegance and the humility of being ephemeral. At the end of two weeks, it will disappear ", underlines the administrator of the Arc who associated with the project the Committee of the Flame and the ex-combatants.

Beyond the consequences of the pandemic, the project was also delayed by the spring nesting of kestrels, longtime residents of the Arc.