Climate scientists issue a warning, and the United Nations warns: the world is suffocating

A new report issued by climate experts at the United Nations predicted that global warming will increase by 1.5 degrees Celsius, compared to the pre-industrial era, around 2030, 10 years earlier than the last estimates made three years ago, which threatens the occurrence of new disasters. Unprecedented 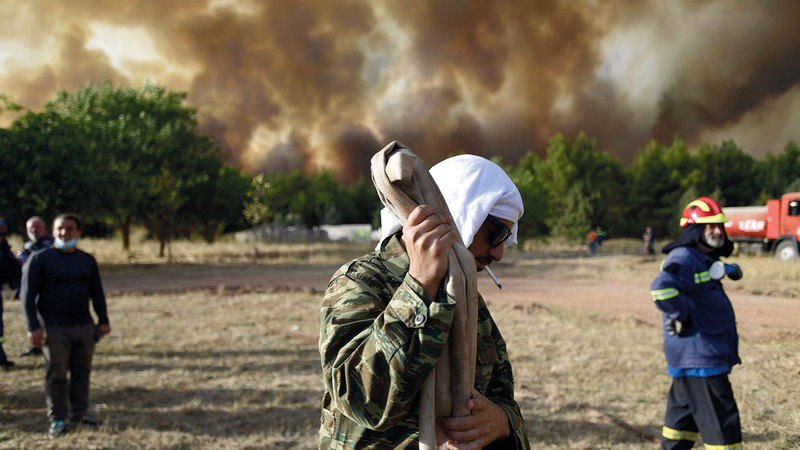 Climate scientists issue a warning, and the United Nations warns: the world is suffocating

A new report issued by climate experts at the United Nations predicted that global warming will increase by 1.5 degrees Celsius, compared to the pre-industrial era, around 2030, 10 years earlier than the last estimates made three years ago, which threatens the occurrence of new disasters. Unprecedented” in a world hit by successive heat waves and floods.

Less than three months before COP26 (COP26) in Glasgow, the first part of the report of the Intergovernmental Panel on Climate Change was published, the day before yesterday, and stated that humans are “unequivocally” responsible for climate disruption, and “not They have no choice but to significantly reduce greenhouse gas emissions” if they want to limit the fallout.

This first assessment report, in seven years, approved on Friday by delegates from 195 countries, reviews five scenarios for greenhouse gas emissions, from the most optimistic to the most pessimistic.

In all cases, global warming will reach, around 2030, 1.5 degrees Celsius compared to the pre-industrial era, 10 years earlier than the previous estimate of the Commission in 2018.

By 2050, it will continue to increase above this threshold, which is one of the limits of the Paris climate agreement, even if the world succeeds in significantly reducing greenhouse gas emissions.

If these emissions are not sharply reduced, the threshold of two degrees Celsius will be exceeded during the current century, and this will mean the failure of the Paris Agreement of 2015, which recommends that warming should be limited to less than two degrees Celsius, and if possible, 1.5 degrees.

While the planet has warmed by 1.1 degrees Celsius so far, the world is witnessing the consequences of that, from the fires that swept the American West, Greece and Turkey, through the floods that inundated some German and Chinese regions, and reaching record temperatures in Canada that reached 50 degrees Celsius.

"For more than 30 years, you have spoken to us about the dangers of global warming," said Inger Andersen, director of the United Nations Environment Programme.

Even with an increase of 1.5 degrees Celsius, heat waves, floods and other extreme weather events will increase in an “unprecedented” way in terms of size, frequency, and time of year in which they hit the affected areas, the Intergovernmental Panel on Climate Change has warned.

"This report should frighten anyone who reads it," said climate scientist Dave Reay. "It shows where we've come, and where we're going with climate change: into a pit we continue to deepen."

Faced with this bleak future, calls for action are growing, and all eyes are on Glasgow, where world leaders will meet in November.

British Prime Minister Boris Johnson, whose country is hosting the COP, said: "We know what we need to do to reduce climate warming, which is to give up coal and move to renewables, nature protection and climate finance."

The US Special Representative for Climate Affairs, John Kerry, stressed: "We cannot wait, all countries must take bold measures," while the European Commission considered that "it is not too late to curb this trend."

United Nations Secretary-General António Guterres said that this report "must declare the end of coal and fossil energy sources before they destroy our planet," considering that these energy sources and deforestation are "suffocating the planet."

Warming 4 to 5 degrees at current pace

While carbon dioxide emissions must be halved by 2030 to stay within 1.5 degrees Celsius, Guterres said, "We can't wait, and there is no room for excuses" after this "red alert for humanity."

But at this point, only half of the governments have revised their greenhouse gas emissions commitments, and the series of previous commitments, made after the Paris Agreement, would cause the planet to warm by three degrees Celsius if respected, but at the current rate the world is moving more towards four degrees Celsius or more. five.

Amid its bleak forecasts, the Intergovernmental Panel on Climate Change spoke of hope that must be held on. In a best-case scenario, the temperature could drop below 1.5°C by the end of the century, by drastically cutting emissions and absorbing more carbon dioxide than emissions. However, technologies that allow large-scale withdrawal of carbon dioxide from the atmosphere are still in the research stage, the commission indicated.

The third part of the report deals with potential solutions to reduce emissions, and is expected to be released in March 2022.

The second part of the report includes the implications of climate change, due to be published in February 2022, and shows how life on Earth will inevitably change within 30 years, or even sooner, according to an introductory copy obtained by Agence France-Presse.

The report stressed that some of the consequences of climate warming “cannot be reversed” in any case, and under the influence of the melting polar ice, the ocean level will continue to rise “for centuries, even thousands of years.” As for the seas, which have risen by 20 centimeters since 1900, it is still possible To rise by about 50 centimeters by the year 2100.

For the first time, the panel points to “the inability to rule out” the occurrence of “tipping points”, such as the melting of the Antarctic ice sheet, or the death of forests, which could lead to a radical and irreversible change of the climate system.

But this is not a reason to abandon the fight against climate change, on the contrary, according to scientists and activists, because every part of a degree Celsius affects the whole situation and enhances the repercussions.

The young activist, Greta Thunberg, said in a tweet: "We have to be brave, and make decisions based on scientific evidence, we can still avoid the worst consequences, but it will not happen if we continue in the same way and do not treat the crisis as a crisis."

• Humans are “unequivocally” responsible for climate disruptions, and “have no choice but to significantly reduce greenhouse gas emissions” if they want to limit the consequences.

• If emissions are not cut sharply, the 2°C threshold will be exceeded during the current century, and this will mean the failure of the 2015 Paris Agreement.

• The report confirms that some of the consequences of climate warming are "irreversible" in any case, and under the influence of the melting of polar ice, the ocean level will continue to rise "for centuries or even thousands of years."