The crowning of veiled women and the thuza on the bikini .. 4 feminist movements within the Tokyo Olympics 2020

This summer was a milestone in gender equality on and off the field, beginning with the announcement by the Tokyo 2020 Olympic Games Organizing Committee that women make up 49% of all athletes competing. 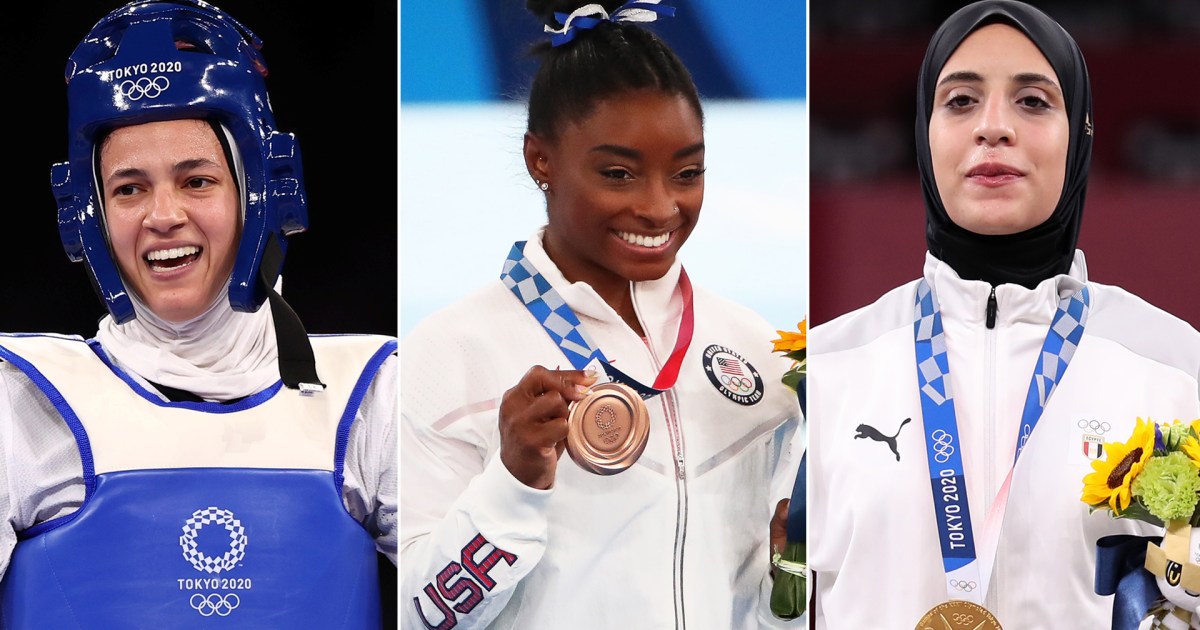 This summer was a milestone in gender equality on and off the field, beginning with the announcement by the Tokyo 2020 Olympic Games Organizing Committee that women make up 49% of the total athletes competing, up from the 45% participation rate at the 2016 Rio Olympics, and 2.2% in the General Olympics 1900, the first women's tournament to be joined by 22 women in 5 sports.

But this extraordinary summer brought together more than 5,000 players in more than 300 races, making the current edition the first gender-balanced tournament in history.

Independents at the forefront of the Olympics

National teams were encouraged to raise their flags at the opening ceremony, a woman and a man, and the Tokyo Games Organizing Committee increased the proportion of women in its executive board to 42%, after Hashimoto Seko was appointed as chair of the organizing committee this year, and formed a team to promote gender equality initiatives in all fields, starting with competing athletes to leadership tools in sports organizations, to leave a legacy that will last beyond the end of the current cycle.

Indeed, this year's Olympics will be remembered not only because of the egalitarian spirit of the appointment of a woman to head the Organizing Committee, but also because of the exceptional attitudes of female Olympians;

This is the first summer games organized after the scandal of Larry Nassar, the doctor of the USA gymnastics team for many years, convicted of sexually assaulting dozens of girls and young women, and among his victims were a number of Olympic athletes, including American star Simone Biles.

Nassar was sentenced to life in prison in 2018, but countless gymnasts and others are still dealing with the fallout. The first is Simone Biles, who climbed to the podium in the gymnastics final in Rio 2016 after she and her teammates won the gold medal. And two years before they announced their sexual assault, they gave a deeper insight into the harsh conditions in which women compete.

Simone Biles and tennis player Naomi Osaka faced a major attack on their way to protect their mental health at the Olympics. Her colleagues' chance of winning a medal, after she fell more than once during training, and decided to be content with being a voice for survivors of sexual assault.

The previous generation of gymnasts did not have the space to make up their mind as Simon, at the 1996 Olympics Keri Strug was forced to jump again under pressure from her coach, causing her team to lose, and in the same year her teammate Dominique Mociano had an accident after falling on her head during a show. .

Despite her insistence on competing, Naomi Osaka was not lucky in the current session, due to her psychological state and dispersion after being forced to appear in media interviews, a condition she violated last year and caused her to be fined 15,000 euros.

A revolution on revealing clothing

For decades, gymnasts have borne the burden of having to wear revealing clothes, showing their legs, and narrowing their waists, and they have always been accompanied by stress and anxiety that their clothes may slip when jumping, which may reveal more than they want and make them feel uncomfortable, due to the International Federation's adherence to the most attractive games for advertisements due to Her "feminine".

That was the main reason why Germans Elisabeth Steeze, Sarah Voss and Kim Boye decided to revolutionize the sexist gymnastics clothing against females versus males, making their full-body debut at last year's European Championships.

Elizabeth wished to repeat the initiative in Tokyo 2020, and indeed the German gymnastics team came out with clothes that cover the whole body, to encourage all players to wear what makes them feel confident and comfortable, especially with no law preventing this, which allowed women’s football teams from the United States, Britain, Chile, Sweden and New Zealand to protest. on sex discrimination, the first time the Olympics have allowed limited protests before and after the race.

Girls gymnastics succeeded in achieving what the beach volleyball girls failed in Norway. In the same week, the European Union imposed a fine on the Norwegian team for wearing shorts instead of bikinis, which was responded to by the International Volleyball Federation in the Tokyo Olympics for the right of women to replace the bikini with long and short pants, and clothes Swimming in one piece, highlighting the athletes' athletic skills rather than their sex appeal.

The impact of the veil ban on generations of Muslim female athletes, and the forced exclusion and disclosure of the head was a reality that lasted for decades, but this year luck was on the side of the Karate Queen, as described by the World Karate Federation, Egyptian Gianna Farouk, after the International Karate Federation allowed women to wear the legal veil in In 2013, Karate was one of the 5 new sports added to the Olympic Games this year, giving the first opportunity to compete for Gianna, the veiled karate player, and the first African and Arab female karate player to reach the Olympics, and even win the gold medal in the last days of it.

The International Basketball Federation also lifted the ban on the headscarf in 2017, which allowed Egyptian Sarah Gamal to become the first hijab-wearing basketball court to participate in the Olympic Games, after she managed a number of international tournaments, but her dream of the Olympics was to open the way for veiled referees to follow.

Similarly, in the Tokyo 2020 Olympics, Iranian badminton player Soraya Aghaei Hajja, who wore a long-sleeved shirt and pants as well as a headscarf, and Egyptian Hedaya Malak, the first Arab and African athlete to qualify for the 2016 Rio Olympics, were