"Densely involved in anti-Russian activities": the Russian Foreign Ministry has banned a number of British citizens from entering Russia

The Russian Foreign Ministry has banned a number of British citizens from entering Russia as a response to the sanctions imposed by London in December 2020 and April 2021. The department noted that these steps were a demonstration of the intentions of the British side to conduct "destructive activities" in bilateral relations. Russian diplomats called on the British leadership to abandon the unjustified confrontational line towards Russia and noted that unfriendly steps would not go unanswered. 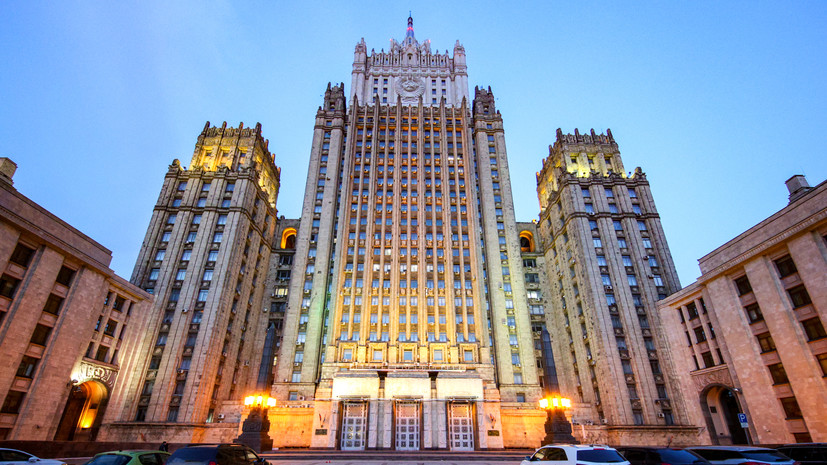 The Russian Foreign Ministry, in response to the unfriendly actions of the British authorities and on the basis of the principle of reciprocity, introduces personal sanctions against a proportionate number of state representatives who are "closely involved in anti-Russian activities."

“Entry to the territory of the Russian Federation is closed for them.

Moscow called on the leadership of the United Kingdom to abandon the "unreasonable confrontational line" with respect to Russia and noted that unfriendly steps will not go unanswered.

In December 2020, the UK government announced the imposition of sanctions against three Russian citizens and the Terek Special Rapid Response Unit on charges of human rights violations.

Restrictive measures were introduced against the speaker of the Chechen parliament Magomed Daudov, the former head of the police of the city of Argun Ayub Kataev and the deputy head of the Chechen Interior Ministry Apti Alaudinov.

The restrictions imposed by London include a ban on entry into Britain and a freeze on bank accounts.

London then noted that they are acting together with the United States, which also announced restrictive measures against individuals and legal entities guilty, according to Washington, of human rights violations.

So, earlier, the United States Treasury Department expanded the sanctions list against Russia, adding the Akhmat football club and the fund of the head of Chechnya, Ramzan Kadyrov, to it.

Also on russian.rt.com "They accuse our country of their own sins": Russia responded to the British statement about disinformation from Moscow

Later, at the end of April 2021, the UK added 14 Russian citizens to the sanctions list, allegedly associated with the Magnitsky case and the alleged embezzlement of $ 230 million from the Russian budget.

The list includes, in particular, the deputy head of the department for combating tax crimes Artyom Kuznetsov, the former investigator of the Investigative Department Pavel Karpov, lawyers Andrei Pavlov and Yulia Mayorova, entrepreneurs Vyacheslav Khlebnikov and Viktor Markelov and others.

It is noted that all assets of the listed persons in the UK will be frozen if discovered.

“We consider these groundless attacks by London to be a clear demonstration of the true intentions of the country's leadership with regard to further building its course in the Russian direction, namely, the desire to conduct destructive activities on the bilateral track,” the Foreign Ministry said.

As Russian diplomats noted, after leaving the EU, Great Britain "stepped up even more in building up sanctions tools, including to demonstrate leadership in the campaign of denigrating Russia."

The ministry drew attention to the "ease with which in London they undertake to" appoint "the guilty and determine their" punishment ".

According to the Foreign Ministry's statement, such activity cannot be described as anything other than an attempt to interfere in internal affairs and put pressure on the Russian justice system.

Also on russian.rt.com Russia has published a list of EU officials banned from entering the country

Recall that in April Moscow published a list of US citizens who are banned from entering Russia.

This decision was made in response to the US sanctions imposed on March 2 against Russian officials.

Later that month, the Foreign Ministry published a list of officials from the European Union who were not allowed to enter the Russian Federation. The list, published on April 30, included eight people, including the President of the European Parliament David Maria Sassoli, a member of the French delegation to the Parliamentary Assembly of the Council of Europe Jacques Maire, the head of the Berlin prosecutor's office Jörg Raupach, and the head of the Laboratory of Chemical, Biological, Radiation and Nuclear Safety of the Research Institute of Total Defense of Sweden Wasp Scott.