Chinanews.com, Zhouqu, Gansu, August 7 (Reporter Feng Zhijun, Yang Yanmin, Li Yalong) On the 7th, the morning breeze on the first autumn day was getting cooler. Zhouqu County, Gansu Province initiated the relocation of geological disasters. The first batch of 289 people from 60 households bid farewell to their homeland and traveled to Lanzhou New District hundreds of kilometers away.   “The gov 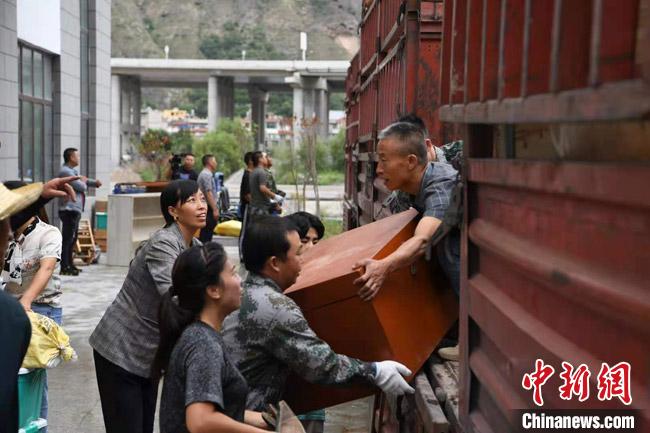 Zhouqu County, Gansu Province initiated the relocation of geological disasters. The first batch of 289 people from 60 households bid farewell to their homeland and traveled to Lanzhou New District hundreds of kilometers away.

He both looked forward to "the new life that is about to start, and finally can sleep in the rain and the wind", and sighed that the homeland of "born in Sri Lanka and grown in Sri Lanka" is difficult to leave.

On August 7, 289 people from 60 households in the first batch bid farewell to their homeland and traveled to Lanzhou New District hundreds of kilometers away to live and work in peace and contentment.

Liu Shihai told a reporter from Chinanews.com that since the huge mudslide 11 years ago, Zhouqu has continued to investigate and manage potential geological hazards without leaving dead ends. Compared with nature, manpower is insignificant and helpless. Whenever there is a thunder and rainy night, the family dared not fall asleep, "Although they are reluctant to accompany the mountains and rivers for decades, seeking a safe place is an urgent matter."

"Lanzhou New District has a very flat terrain and landforms. We no longer worry about the safety of life and property." Liu Shihai said. After leaving the homeland where he lived for most of his life, fortunately, many relatives and close neighbors "rooted in a foreign land" with him. They will not be very lonely. If there is a chance, I will often come back to visit relatives and friends.

The picture shows the first group of people relocating for geological disasters in Zhouqu County packing carts, furniture and luggage.

Zhang Xudong, Secretary of the Party Committee of Guoye Town, Zhouqu County, said in an interview with a reporter from Chinanews.com that after the close connection with the Lanzhou New District in the early stage, in addition to ensuring the housing allocation of the relocated people, the elders with skills in the relocated households have been investigated in the early stage. Adopt nanny-style services to help them find employment as soon as possible around their new homes.

In the early morning of August 8, 2010, a sudden heavy rain fell in the mountainous area of ​​the northeastern part of Zhouqu County, triggering huge floods and mudslides in the Sanyanyu and Luojiayu gully systems. The area flowing through was razed to the ground and 1,510 people were killed. 255 people are missing.

This is the most serious mountain torrent and debris flow disaster in China since 1949.

The picture shows the first group of relocating people in Zhouqu County who are relocating for geological disasters to avoid danger and take a bus.

Since 2011, there have been more than 220 geological disasters in the county. Especially since the "August 17" flash flood and debris flow occurred last year, several landslides in the county have caused great official concern.

Shu Shiguang, acting county magistrate of Zhouqu, said that this season last year, a torrential flood and mudslide disaster, which was unprecedented in a century, took them decades of hard work, sweat, and even their lives to build roads, build bridges, and build bridges. The house was destroyed.

After the Spring Festival this year, the danger of landslides in the villages of Beishan and Guoye in Lijie once again broke the original life.

"At this moment, everyone has in their hearts the homeland complex that cannot be parted, but also relatives and friends who are inseparable. They have a deep attachment to Zhouqu's hometown, and a yearning for a new life in the future." Shu Shiguang said, before leaving. On the occasion, even though I was reluctant to give up, I still had longing for it.

Through relocation, the villagers can stay away from the threat of disasters, no longer have to worry about fear, and no longer be surrounded by the vicious circle of "building every year and destroying every year."

It is understood that Zhouqu has signed relocation and resettlement agreements with 1,472 households door by door. After several optimization plans and measures, first ensured that the 179 families threatened by the Lijie Beishan landslide and the Guoye landslide were resettled in the Lanzhou New District. And formulate the "Relocation and Transportation Plan" to refine the responsibilities of five-level cadres for safe transportation and the duties of industry departments to ensure the safety of transportation for relocated people.

Liu Changgen, deputy governor of Gansu Province and leader of the geological disaster avoidance relocation work coordination and leadership group leader in Zhouqu County, said recently that Zhouqu is a rare area in the country where landslides, mudslides, and collapses are three major geological hazards. The inevitable requirement for the long-term development of Qu is also the inevitable choice for the revitalization of the Zhouqu village.

Ying firmly established the concept of "relocation is development" and immediately started the first batch of relocation and resettlement work.

In response to the helplessness that "one side of the water and soil cannot support the other side", Zhouqu County Party Secretary Cai Xiang Dangzhi said that in order to protect the production and life of Zhouqu residents from threats, Zhouqu officials have racked their brains in recent years and still cannot eradicate the problem that hangs on the heads of the affected people. Relocation is the most effective and pragmatic path for the “safety hazards” mentioned above. Local officials will continue to track and pay attention to the “settlement” and “rebirth” of relocated households during the transition period for three years.