JO-2020: Laurent Tillie, manager cream Tokyo (AFP) The Olympic coronation of the Earvin Ngapeth gang crowns Laurent Tillie's nine years in office: after Aimé Jacquet, Claude Onesta or Didier Deschamps, Tillie integrates the cream of the French breeders with a smooth method: "give a framework but leave freedom ". Starting from a blank page - the absence from the 2012 Games -, Laurent Tillie, 57, led the France team to its first titles 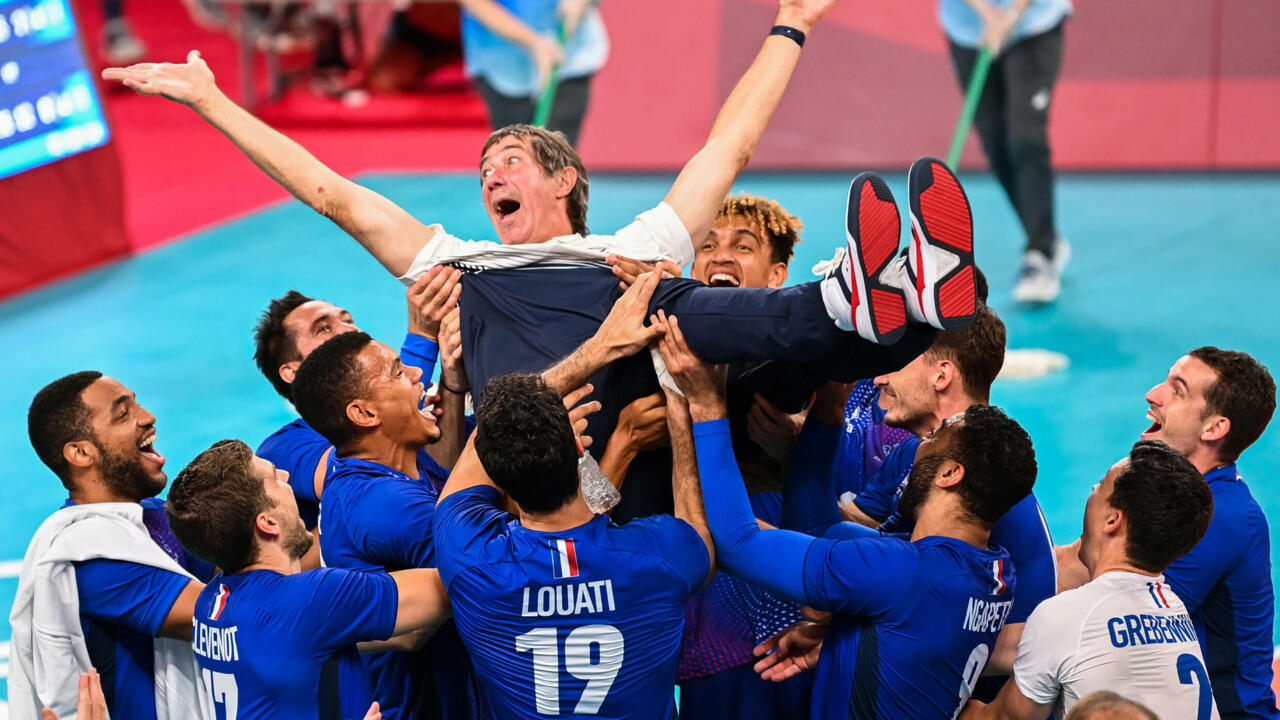 The Olympic coronation of the Earvin Ngapeth gang crowns Laurent Tillie's nine years in office: after Aimé Jacquet, Claude Onesta or Didier Deschamps, Tillie integrates the cream of the French breeders with a smooth method: "give a framework but leave freedom ".

The coach of the French volleyball team, Laurent Tillie, during the group match against the Netherlands, at the European Championships, on August 27, 2017 in Katowice (Poland) PIOTR NOWAK AFP / Archives

"Laurent, it is he who trusted our young group", pays homage to him his libero Jenia Grebennikov interviewed by AFP.

Laurent Tillie takes advantage of the leeway offered by the trauma of non-qualification to give the keys to the Blues to a new generation, talented but not yet perceived as gifted at the time of his arrival.

"He is the first to have us lined up for a European championship (2013) and then the world (2014) when we were very, very young," continues "Grebe." "We performed, we all grew and we went to big clubs in Europe and it's thanks to him. "

The Blues reached the quarterfinals and then the semi-finals at the 2014 World Cup in Poland where they were eliminated in the tie-break by Brazil.

The transplant has taken, the adventure will last.

"He left us full of freedom, suddenly we became responsible for what we did on the ground", analyzes Earvin Ngapeth for AFP.

"I think we really grew up because of it. As players, as a group."

A legacy of Tillie's past as a player, bronze then silver medalist at the European Championships (1985 then 1987) with the French team.

"He told us everything," says Jenia Grebennikov.

"All the frustrations he's had as a player to keep us from having them."

That of the 1986 world championship in France when the French team was eliminated in the quarter-finals, that of the Seoul Games in 1988 when it did not reach the semi-finals.

"I have been running after these dreams for forty years," said Laurent Tillie after the semi-final won Thursday as if he had finally crossed the finish line.

Him anxious, "still frustrated" by the lost semi-final of the 2014 World Cup against Brazil or that of Euro 2019 at home against Serbia.

"I think about it all the time. What have I done? What haven't I done? It comes constantly," he confided after qualifying for the final.

To believe that the relaxed attitude displayed by his "Team Yavbou" is not enough to appease everything.

The coach of the French volleyball team, during the group match against Argentina, August 7, 2021 at the Tokyo 2020 Olympic Games ANDREJ ISAKOVIC AFP

"Laurent is someone who is super stressed, but I think he managed to calm his stress thanks to the group we had", wants to believe Earvin Ngapeth.

The leader of the Blues is never stingy with compliments to his coach.

"I knew the before and after of his arrival, that has nothing to do with it."

Because it is at the heart of the device of Tillie, follower of the "participatory victory" as he explained after the success of the hope in the group stage, against Russia.

The joy of the coach of the French volleyball team, Laurent Tillie, and the teammates of Earvin Ngapeth (r), after their victory against Germany, in the final of the Olympic qualifying tournament for the Tokyo 2020 Games, January 10, 2020 in Berlin John MACDOUGALL AFP