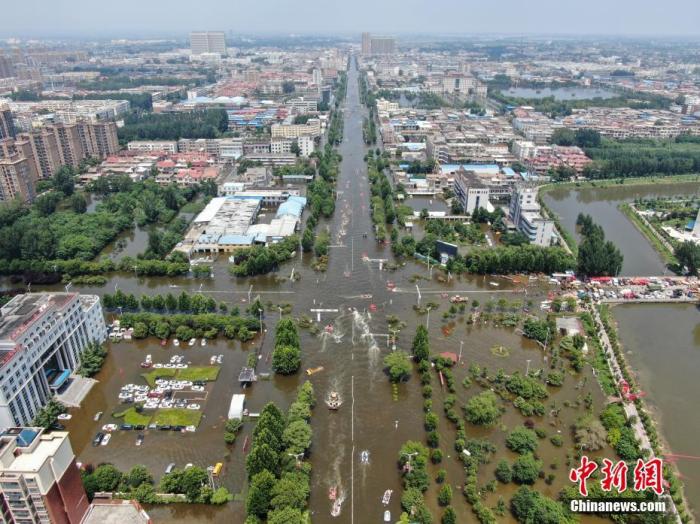 According to preliminary statistics, various natural disasters caused 34,205 million people to be affected, 432 people died and disappeared due to the disaster, 3.499 million people were relocated in emergency; 105,000 houses collapsed and 902,000 houses were damaged to varying degrees; the area of ​​crops affected was 3370.1 thousand hectares directly; The economic loss was 148.84 billion yuan (of which, the flood disaster loss in Henan Province is under verification and assessment).

Compared with the average of the same period in the past five years, the number of deaths and missing persons due to disasters, emergency resettlement, the number of collapsed houses and direct economic losses increased by 38%, 30%, 5% and 21% respectively.

According to preliminary statistics, from January to July this year, various natural disasters caused 65.23 million disasters, 590 deaths and disappearances, and 3.888 million emergency resettlement; 119,000 houses collapsed and 1.304 million were damaged to varying degrees; crops were affected by 64275,000. Hectares; direct economic losses of 192.16 billion yuan.

Data map: On July 26, there was still water in some sections of the urban area of ​​Weihui City, Henan Province.

There are six main characteristics of natural disasters nationwide in July.

First, the rainfall in the north is significantly higher, and Henan and other places have suffered severe floods.

In July, a total of 8 heavy rainfall processes occurred across the country, and the average rainfall was the same as that of the same period in normal years and was slightly higher.

The precipitation in some parts of the north is obviously higher. The rainfall in western Heilongjiang, Beijing-Tianjin-Hebei, northern Shandong, and central and northern Henan is 1 to 2 times more than normal. The local rainfall intensity is particularly high and the time period is concentrated. July 17-22 this year In the process of the strongest rainfall, the daily rainfall of 20 national meteorological stations in Henan Province exceeded the historical extreme value since the establishment of the station.

Affected by heavy rainfall, the flood conditions of northern rivers are serious, and small and medium-sized rivers are rising rapidly. 276 rivers in 25 provinces (autonomous regions and municipalities) including Heilongjiang, Beijing and Henan have experienced over-warning floods, of which 86 rivers are over-protected and 25 rivers Beyond history, there were two numbered floods in the Nenjiang River in the Songliao River Basin, one flood in the Luanhe River and the Zhangwei River in the Haihe River Basin, and one flood in Taihu Lake.

Dangers and disasters occur frequently in various places, and many cities such as Zhengzhou and Xinxiang in Henan have suffered serious waterlogging, and the production and life of the people have been severely affected.

The second is that the typhoon "fireworks" has a wide range and long duration.

In July, a total of 3 typhoons occurred in the Northwest Pacific and the South China Sea, of which 2 typhoons landed in my country.

Typhoon No. 6 "Fireworks" landed twice in Zhejiang Province. There are several notable features: one is the strong wind, the maximum wind force near the center is 13 when the "fireworks" makes landfall; the second is heavy rainfall, which is affected by typhoons, Zhejiang and Shanghai Heavy rainfall occurred in places such as Anhui, Jiangsu, Zhejiang and Shanghai, and the daily rainfall of 12 national weather stations in Zhejiang and Shanghai broke through the historical extreme. The later period of influence extends from East China to the Northeast. Fourth, the duration is long. The "fireworks" move very slowly in the coastal waters, stay on the mainland for a long time after landing, and affect the eastern part of my country from south to north for up to 10 days.

In addition, Typhoon No. 7 "Chapaka" landed on the coast of Jiangcheng District, Yangjiang City, Guangdong Province, affecting Guangdong, Guangxi and Hainan, causing 66,000 people to be affected.

The third is the frequent occurrence of severe convective weather, and the disasters of wind and hail are diverse.

In July, a total of 7 large-scale convective weather processes occurred across the country, with a concentrated time of impact, a wide range, and strong local extremes.

In general, the wind and hail disaster in July caused 1.91 million disasters, 15 people died and disappeared due to the disaster, more than 20,000 houses were damaged to varying degrees, and the direct economic loss was 3.05 billion yuan.

Fourth, there have been periodic droughts in Northwest and South China, with limited impact.

In July, large-scale heavy rainfall occurred in southern, northern and northeastern China. The drought in Shanxi, Liaoning, Henan, and Jilin was relieved, and the drought in Guangdong, Fujian and other provinces eased.

At the same time, due to high pressure control in the southwest, east northwest and east northeast, the temperature continued to be higher, the rainfall was less, and the drought situation was on the rise. 64 counties in Inner Mongolia, Ningxia, Gansu, Shaanxi, Jiangxi and other places had moderate or above soil moisture shortages. .

In general, the drought disaster in July was lighter than the same period in previous years, and 11 provinces (regions) including Inner Mongolia, Jiangxi, Guangxi, Gansu, Ningxia, and Shaanxi were affected to some extent.

Fifth, the forest fire situation is stable, and no grassland fire has occurred.

In July, most parts of the country have entered the main flood season, and the forest fire risk situation is relatively stable.

Compared with the average value of the same period in the past five years, the number of forest fires has dropped by 57, or 92%.

Sixth, the level of seismic activity was weak and did not cause significant losses.

Among them, the magnitude 3.5 earthquake in Dongbao District, Jingmen City, Hubei Province and the 4.1 magnitude earthquake in Lu County, Luzhou City, Sichuan Province on July 4 caused a small amount of house damage.