These behaviors of the Chinese inside and outside the Olympic Games are teary... 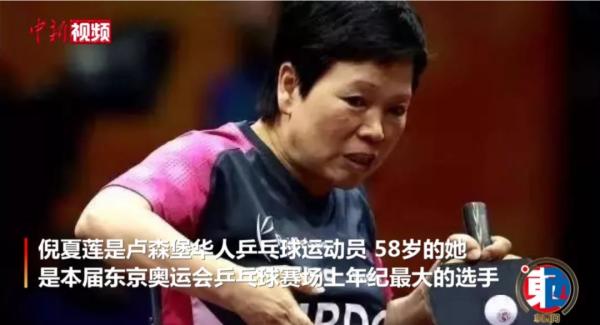 China Overseas Chinese Network, August 5th, title: Inside and outside the Olympic Games, these behaviors of the Chinese are teary...

Chinese volunteers appeared in many competitions to cheer for the Chinese team;

The Chinese "cheerleading team" outside the field cheered for the Chinese team in various ways...

The Tokyo Olympics schedule is over halfway, and the touching stories happening inside and outside the Olympics are teary...

Recently, there is a Chinese table tennis veteran all over the net. She is the Chinese athlete Ni Xialian from Luxembourg.

At 58 years old, she is the oldest player in the table tennis arena of the Tokyo Olympics.

She was a member of the Chinese national team. After moving to Luxembourg, she continued her ping-pong career and played five times in the Olympics.

In the women's singles competition of this Olympic Games, she defeated the 17-year-old South Korean teenager Shin Yubin 3:4, ending the Olympic journey.

Recently, when Ni Xialian was interviewed by a Chinese reporter, she was very excited and burst into tears when she talked about the current development of her ancestral (home) country: "There is no other country in the world that has such an achievement. It is really touching to think about it. Speaking of it, I am really touched. It is not easy. We are a miserable nation. So many people have been working hard over the years. So I said that the definition of success is very broad. Success is not a champion. Those who give silently must be grateful and Salute."

In Luxembourg, Ni Xialian is a national treasure-level sports star.

But she said that she is still deeply attached to her ancestral (home) country in her heart, and she also hopes that through her achievements on the court, she can speak on behalf of China.

She told reporters: "Since I live here, my fate has pushed me here. I am now in such a position, I didn't expect it, so we will do things well. I represent China to be able to compete internationally. To make a sound, I think it is much bigger and more meaningful than on the court. So this is actually a very important reason why I insist on playing."

On the first day of the Tokyo Olympic Games, the Chinese shooting team youngster Yang Qian broke the Olympic final record with a 251.8 ring in the women's 10m air rifle final, winning the first gold medal for the Chinese team.

In the women's 10-meter air rifle final of the Tokyo Olympics held on July 24, Chinese athlete Yang Qian won the championship and won the first gold medal for the Chinese delegation.

Lin Yuan feels cordial when he meets his compatriots in a foreign land. Talking easily with the athletes also eased their nervous preparations.

The picture shows the medalists standing on the podium.

Lin Yuan said that she saw Chinese player Yang Qian participating in the first match on July 24. The match time coincided with the lunch break. She explained that she had a good job. Regardless of the hungry and hungry of the busy morning, she went to the stadium. Run away.

After the competition, a foreigner's accent in Chinese announced that Yang Qian had won the gold medal, and the first gold medal in the Olympics would go to China!

There was applause from the entire venue, and it was precisely because of the empty field that the applause became clearer and more penetrating.

Lin Yuan said: "When the familiar national anthem is played, I can't help but hum in a low voice to the side, and the emotions naturally overflow."

Except for Lin Yuan, Chinese volunteers can be seen everywhere in this Olympic Games. Under the premise of doing their own Olympic work, they will cheer for Olympic athletes on the sidelines in every game where there is a Chinese team!

Chinese in Tokyo hang 10,000 words of cheer at the door

In this Olympics, there is a special group that frequently appears on the hot search list. They are the "atmosphere group" of overseas Chinese active outside the competition arena.

For the sake of epidemic prevention, all games in the Tokyo area of ​​this Olympic Games will be empty, and spectators cannot enter the stadium.

However, this can't stop the enthusiasm of overseas Chinese in Japan.

On July 24, a Chinese couple who lived near the Tokyo Olympic Village hung the national flag on their balcony, set up a TV, and broadcasted the cheering and blessings they collected from 10,000 Chinese netizens in a loop;

On July 27, the Chinese women's volleyball team played against the US team.

On the opening ceremony of the Tokyo Olympics, overseas Chinese in Japan also displayed a huge five-star red flag 18 meters long and 12 meters wide in the Ebisu Garden Plaza in central Tokyo...

This series of heart-warming actions not only touched the athletes on the court, but also deeply touched the netizens. Many people said: "It's so ceremonial!" "The Chinese team! Come on!" "Rounding down I have also been to the Olympics! "...

The Olympic Games are still going on in full swing. In the stadium, athletes from all over the world are working hard, and outside the stadium, the audience cheer for them in their own way.

Under the epidemic situation, this Olympic Games full of special significance embodies the spirit of the modern Olympics: "Everyone should enjoy the possibility of engaging in sports without any form of discrimination, and embody mutual understanding, friendship, and solidarity. And the Olympic spirit of fair competition".