Laila's death at work, her husband speaks: "It must not happen again"

There is a suspect for manslaughter. The legal representative of the company entered in the register 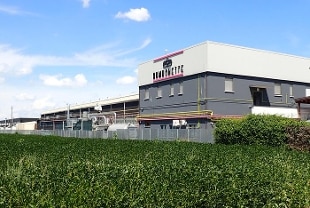 August 05, 2021 "A former employer of mine, a partner of the company where my partner was hired about a couple of months ago, warned me at 9 am, with a phone call. He was unable to tell me clearly: 'Laila he had a bad injury, run here ... ".

He didn't add anything else.

But I understood everything. '"To tell the story, in an interview with Corriere della Sera, Manuele Altiero, the companion of Laila, forty years old who died at work in the Modena area.

"We weren't married, but we planned to do it next June, in Puglia. That wedding in front of our daughter would have been beautiful ...". To her daughter, Rania, on the advice of a psychologist from the Municipality of Bastille, she said what had happened, without turning around: "Unfortunately, Mom took a strong blow, she went to heaven". "Rania looked at me and yes, of course, she understood. Then she hugged me tightly, for a long time."

Laila's partner then says: "The machines have to work properly. Safety comes first. Every day there was an electrician around that die-cutter, there were problems." "I think we must somehow go beyond the sense of the investigation. It must be the authorities and politics, to demand the truth about what happened to my Laila. We owe it to her. You can't die on the job, you don't have to. happen more ".

There is a suspect in the death of Laila El Harim, the 40-year-old worker, mother of a four-year-old girl, who died while she was at work, swallowed by a machine in a packaging company in the Modena area. The public prosecutor of Modena would have entered the legal representative of the company in the register of suspects, the Bombonette di Camposanto.

The open file is for manslaughter and the registration at the moment should be considered as a necessary act to clarify how things went on Tuesday morning, when Laila was dragged and crushed by a die-cutter, a large tool used to shape, and therefore precisely cut, different types of material.

An autopsy will also be performed on Laila's body, ordered by the Modena prosecutor to complete the framework of investigations on what happened. Under seizure the machinery in which the worker, according to an initial reconstruction, would most likely have been stuck without finding a way out.

According to a first report that the National Labor Inspectorate sent to Minister Andrea Orlando, the machinery was in fact equipped with a double mechanical operating block, "but unfortunately - it says - that could be operated by the operator only manually and not automatically. This allowed an unsafe operation that resulted in crushing death. "

Laila El Harim would have turned 41 days, she was originally from Morocco and had been living in Italy for about twenty years. In the Modenese area she had built her life and her family, she planned the marriage with her partner from whom four years ago she had had a baby girl and in the town where she lived, not far from the company headquarters, she was known as a kind and sunny person.

She had been regularly employed for a few months at Bombonette di Camposanto. Enthusiastic about the work she was doing, she entered the office on Tuesday at 5.50 am for the morning shift. After a few hours, the tragedy on which investigations are underway by the carabinieri, the territorial inspectorate of Modena, the prevention and safety of workplaces service of the territorial Ausl.

A tragedy that commemorated the death, in a factory in the Prato area, of another young mother, the 22-year-old Luana D'Orazio who died in May stuck in a warping machine. And that prompted the President of the Republic Sergio Mattarella to call Minister Orlando for more information on the recurrence of similar accidents in the workplace, recalling the issue of safety. An argument that, in Orlando's reassurances, is "subjected to constant and incisive attention" by the Government.

Cisl: "Thanks Mattarella for the appeal to safety"

“Thanks to President Mattarella for having once again appropriately emphasized that a change in the institutions is needed to stop accidents at work, an unacceptable social scourge. The tragic death of Laila after that Luana shook the consciences of all Italians ”. The general secretary of the CISL, Luigi Sbarra, writes on Twitter.