Heat wave hits wildfires in the Mediterranean, experts say it will be more frequent in the future

China News Service, August 5, reported that the worst wildfires in decades have been burning on Turkey and the Aegean coast for a week, and the heat wave has increased, raising the risk of worsening fires and air pollution in nearby areas. The European Union's air monitoring agency said on the 4th that the Mediterranean region has become a wildfire hot zone, and such a climate will become more f 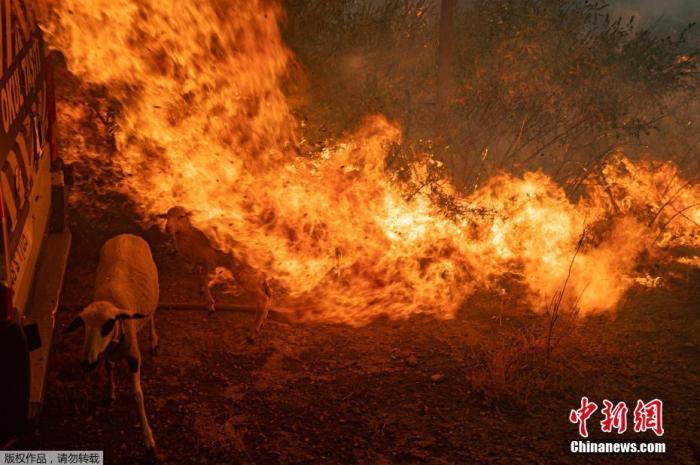 China News Service, August 5, reported that the worst wildfires in decades have been burning on Turkey and the Aegean coast for a week, and the heat wave has increased, raising the risk of worsening fires and air pollution in nearby areas.

The European Union's air monitoring agency said on the 4th that the Mediterranean region has become a wildfire hot zone, and such a climate will become more frequent in the future.

In recent days, wildfires on the southern coast of Turkey have continued to rages.

Nearly 200 wildfires in Turkey in 8 days

In large areas of southern Turkey, the temperature has exceeded 40 degrees Celsius, and the continuous high temperature has caused hundreds of fires in the past few days.

Since the fire broke out, thousands of people have been evacuated from their homes.

Local residents and support teams from Russia, Ukraine, Iran and Azerbaijan are helping to put out the fire.

At least 13 aircraft, 45 helicopters, drones and 828 fire trucks participated in the fire fighting.

According to reports, nearly 200 wildfires have occurred in Turkey in the past eight days, of which 15 have not been controlled.

A fire site in the southwestern Mula province has spread to the edge of a nearby thermal power plant. The plant has been evacuated and flammable and explosive materials have been removed.

Turkish President Erdogan said: "This thermal power plant may have been burned to the ground... If it weren't for the violent wind, the fire would have been under control."

The fire in the southern town of Manavgat in Antalya Province, where the fire was first reported a week ago, has not yet been extinguished, and fires have spread in several western provinces in the past two days.

Turkey’s neighboring country, Greece, also suffered the worst heat wave since 1987. The temperature across the country generally reached over 40 degrees Celsius on the 3rd, and the highest temperature in parts of the capital Athens reached 45 degrees Celsius.

On the 3rd local time, a wildfire broke out in the forested area of ​​northern Athens. Many houses were burned down. The authorities ordered thousands of residents in the nearby area to evacuate urgently.

The fire caused 7 people to be admitted to hospital for breathing problems and another firefighter was injured.

On the evening of the 3rd, the Deputy Minister of Citizen Protection Hadalias said that due to extreme weather, there have been 81 wildfires in various parts of Greece in the past 24 hours. Among them, the northern suburbs of Athens are the most serious.

Strong winds and dry weather made the fire difficult to control. The government has sent 520 firefighters, 150 fire trucks, 14 firefighting planes and helicopters to extinguish the fire. Hundreds of soldiers, police, volunteers, and municipal employees also participated.

On August 3, local time, wildfires burned in the suburbs of Varympompi in northern Athens, Greece.

Scientists estimate that climate change causes global temperature to continue to rise, and the number of heat waves around the world will become more frequent and last longer, and the impact will be stronger.

The agency monitors wildfires through satellites and ground-based observatories, indicating that the material and intensity of wildfires in Turkey and southern Italy are increasing rapidly.

The smoke stream caused by wildfires in southern Turkey can be clearly seen on satellite images. The severe fire has caused severe suspended particulate matter air pollutants over the eastern Mediterranean.

Parrington, a senior scientist at the Copernicus Atmospheric Monitoring Agency, said: "It is particularly important to observe these intense fires closely, because the smoke from wildfires not only affects the local air quality, but also drifts away with the wind."

The European Commission also stated on the 4th that it has dispatched firefighting aircraft, helicopters and firefighters to assist countries such as Italy, Greece, Albania and North Macedonia.