Joint military maneuvers of Moscow, Tashkent and Dushanbe started at the Harb-Maidon training ground near the border with Afghanistan. According to the RF Ministry of Defense, more than 2.5 thousand servicemen and about 500 units of weapons and military equipment will be involved in the training. The core of the Russian military contingent will be the units of the 201st military base, as well as the Central Military District, including mountain motorized rifle, tank and artillery units. According to experts, the conduct of such maneuvers with the participation of a large number of Russian military personnel indicates that the security of the southern borders of Russia, as well as the borders of the CSTO allies in the context of the aggravation of the situation in Afghanistan, is extremely important for Moscow. 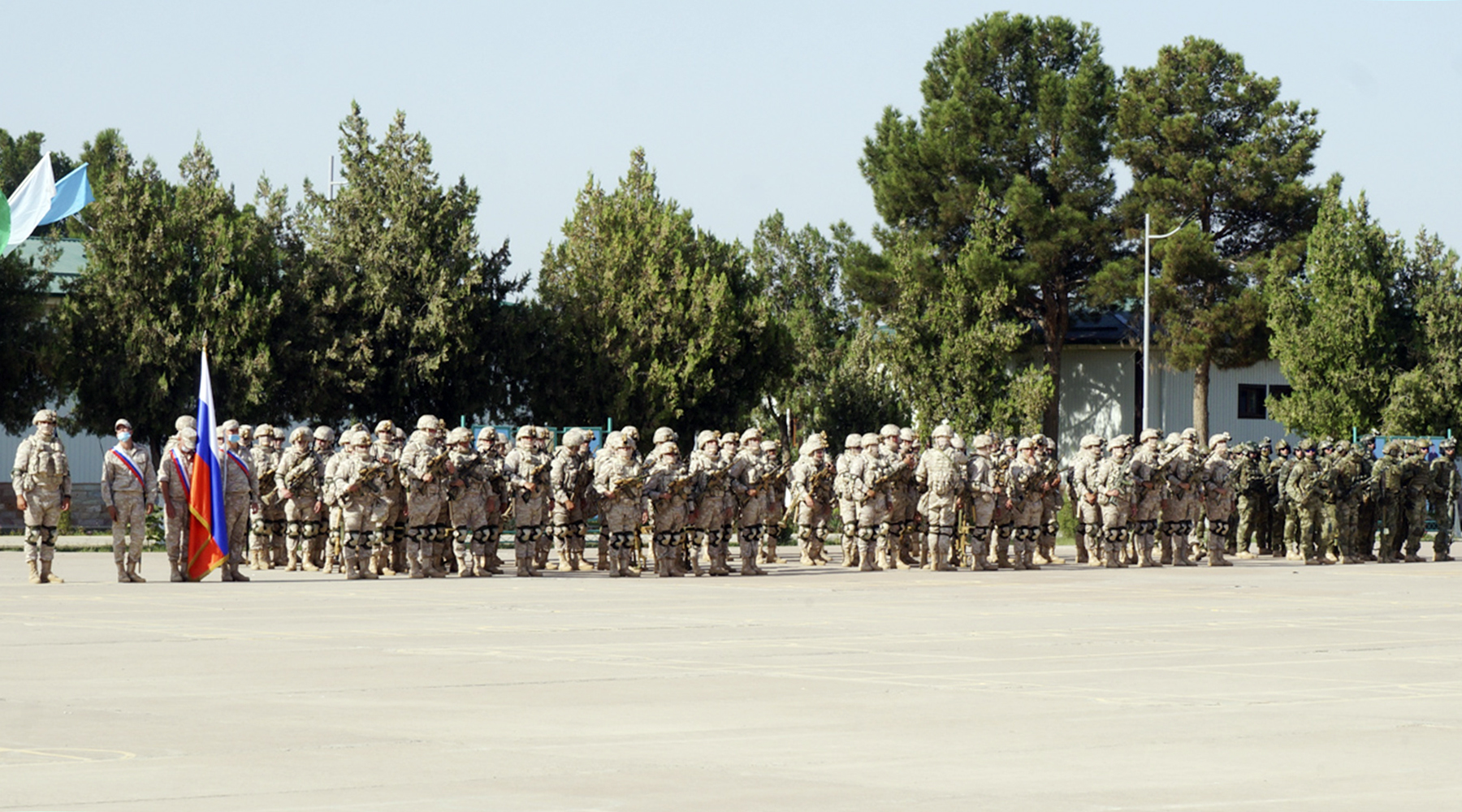 Joint exercises of Russia, Tajikistan and Uzbekistan started at the Harb-Maidon training ground near the border with Afghanistan.

This was reported by the Ministry of Defense of the Russian Federation.

"The main goal of the exercise is to strengthen the military community and close interaction between the armed forces of our states, to confirm the high level of training of troops and strong morale," said Deputy Commander of the Central Military District Yevgeny Poplavsky during the opening ceremony of the maneuvers.

According to the Ministry of Defense of the Russian Federation, more than 2.5 thousand servicemen and about 500 units of weapons and military equipment will be involved in the exercises.

“The backbone of the Russian military contingent will be the units of the 201st military base, including mountain motorized rifle, tank, artillery units, as well as special purpose units and specialists from the electronic warfare and NBC protection units of the Central Military District (CVD).

In total, over 1.8 thousand servicemen and up to 420 units of weapons and military equipment will be involved in the exercise from the Russian side, ”the defense ministry said in a statement.

It is also noted that for assault and army aviation they will use "areal targets - a camp of militants, caches, armored columns on the march, accumulations of manpower and equipment of a conditional enemy."

The trainings will last until August 10.

As the commander of the Central Military District, Colonel-General Alexander Lapin, said earlier, during the exercises, preparations for the conduct of hostilities by a joint group of forces will be practiced "to defeat the detachments of illegal armed formations that have invaded the territory of the union state."

At the beginning of this week, Russian-Uzbek exercises also started at the Termez mountain range near the border with Afghanistan.

About 1.5 thousand servicemen take part in them.

As the Ministry of Defense of the Russian Federation reported, these maneuvers are being held "in order to work out the issues of repelling possible threats and practical interaction to ensure security and maintain stability in the Central Asian region" against the background of the deteriorating situation in neighboring Afghanistan.

According to the defense department, during the training, special-purpose reconnaissance groups landed from Mi-171 and N-215 transport-combat helicopters using elements of mountain equipment from a height of 25 m to unprepared sites.

After that, they carried out reconnaissance of the area, and also "found and destroyed the camp of conditional illegal armed groups," the Defense Ministry said.

According to the ministry, a number of joint exercises under the auspices of the Collective Security Treaty Organization (CSTO), which will be held by the end of this year in the territory of Tajikistan and Russia, will be aimed at “neutralizing the expanding range of challenges and threats to military security and conflict potential along the perimeter of the CSTO borders. ".

Recall that the joint exercises Moscow, Tashkent and Dushanbe are being held against the background of the aggravation of the situation in Afghanistan, which borders Tajikistan and Uzbekistan.

The situation in the Afghan republic began to destabilize after the hasty withdrawal of American troops and NATO contingents from it.

Such measures by Washington and the alliance provoked a large-scale offensive by the radical Taliban * on the positions of government forces.

Taliban spokesman Zabiullah Mujahid said at the end of July that the movement controls about 90% of Afghanistan's borders.

The fact that the situation in the Afghan republic is deteriorating is acknowledged by the United States itself.

So, during a briefing on August 3, the head of the press service of the State Department Ned Price said that because of the actions of the Taliban in Afghanistan, a civil war could begin.

“But the essence is still simple: if they (the Taliban. -

) try to act contrary to their statements, they will become international outcasts. They will not have the support of their people. There will be no support from the international community. We are all concerned (and this is just one of many reasons for concern) that as a result (of these actions. -

) a civil war will break out - a war in which the Afghan people will not and will not be able to provide themselves with the security they deserve to live in. " - Price noted.

Moscow has repeatedly expressed concern about the aggravated situation in Afghanistan.

Thus, on July 28, Russian Defense Minister Sergei Shoigu at a meeting of the defense ministers of the Shanghai Cooperation Organization said that the situation in the republic "is rapidly degrading and has practically gone out of the control of the authorities."

According to him, the Taliban already control most of the territory.

"The development of events in the bordering northern regions of the country and the mass exodus of Afghans in the territory of Tajikistan and Uzbekistan show that the agreements between the United States and the Islamic movement of the Taliban are not being implemented," Shoigu stressed.

According to him, the US and NATO mission in Afghanistan "failed".

According to her, this situation is the result of the experiments of Western countries, "which substituted international law, simply pushing the UN Security Council with its mandate and resolutions somewhere far away and coming up with their own model of certain rules."

military expert Alexei Leonkov, conducting joint exercises of Russia, Tajikistan and Uzbekistan with the participation of 1.8 thousand Russian military out of a total of 2.5 thousand suggests that the security of the southern borders of the Russian Federation, as well as the borders of the allies, is extremely important for Moscow. CSTO.

“The scale of the current maneuvers, as well as the development of military interaction, taking into account the development of events in Afghanistan, indicate that Russia takes the threat of provocations on the border quite seriously.

Fierce hostilities are taking place in the Islamic republic, and the Taliban, behind the facade of their words about the desire for peace, are pursuing a policy aimed at exacerbating the conflict.

And this is indeed a serious danger for countries bordering Afghanistan, including Tajikistan and Uzbekistan.

Therefore, it is important to check how prepared these republics are for the development of the Afghan conflict, ”the analyst said in an interview with RT.

Leonkov also recalled that Dushanbe made a decision to call in 20 thousand reservists to strengthen the border with Afghanistan.

“This is necessary in order to conduct appropriate training, to check how the military will be able to repel provocations.

Uzbekistan also does not waste time practicing the actions of the military, including in the course of joint training with Russia and Tajikistan, ”he said.

Military expert Yuri Knutov said, in turn, that the takeover of the Afghan-Tajik border by the Taliban is fraught with serious consequences, in particular, the spread of radical terrorist groups in the territories of Tajikistan and Uzbekistan.

“Thus, a threat arises first for these republics, and then for Russia.

To prevent all this, to repel provocations quickly, with minimal losses, joint exercises are being held in Moscow, Tashkent and Dushanbe.

In addition, these maneuvers are aimed at strengthening the military cooperation of the three countries, "the expert said in a conversation with RT.

According to Leonkov, it is important that units of the Russian 201st military base take part in the training of Russia, Tajikistan and Uzbekistan.

“This military facility is a strong independent unit, whose task is to withstand the first blow if provocations occur.

At the same time, you need to understand that in this scenario, other units, primarily the Central Military District, will come to the aid of the 201st base, ”he said.

At the same time, Leonkov stressed that in the event of real provocations on the border, the Russian base in Tajikistan will be able to repel them.

“The military serves there, regularly practicing and honing their military skills for several years.

They actively participated in multinational exercises.

The 201st base is in constant combat readiness, it, together with the military potential of the allies, represents a serious force against any terrorist gangs, ”the expert concluded.