"Criminal approach": why Zelensky urged residents of Donbass who consider themselves Russian to leave for Russia

Volodymyr Zelenskyy throws a “stone of discord” at people with his statement about Donbass, says Maria Zakharova, spokesman for the Russian Foreign Ministry. Earlier, the President of Ukraine called on residents of the southeast of the country, who consider themselves Russian, to leave for the Russian Federation. The Federation Council noted that such a statement only exacerbates the split between Kiev and the residents of Donbass. As stressed in the Federation Council, with his statement Zelensky again made it clear that Kiev only needs the territory of Donbass, and not the people living there. 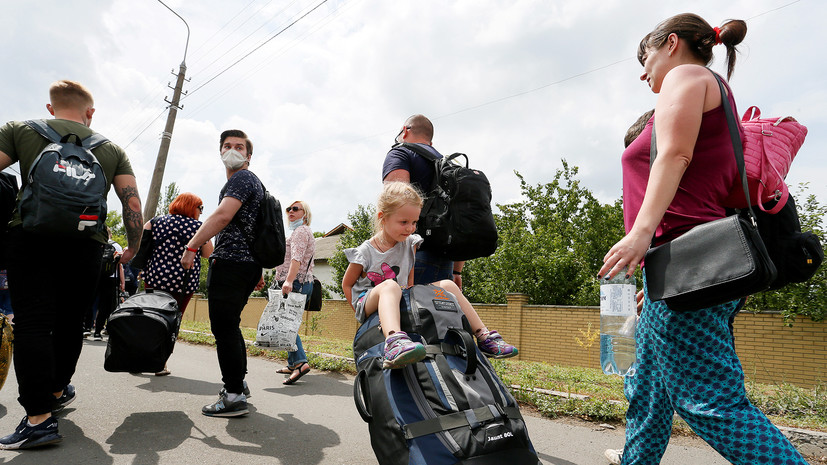 The Kiev regime crossed all the red lines separating nationality from nationalism.

Maria Zakharova, an official representative of the Ministry of Foreign Affairs of Russia, wrote about this in her Telegram channel, commenting on the words of the President of Ukraine Volodymyr Zelensky about Crimea and Donbass.

“The final will be sad.

History must teach, otherwise it repeats itself.

And no matter how after a couple of years Zelensky “for the sake of his children and grandchildren” was not offered to leave by those who think that in childhood he ate them, “eating rapana,” Zakharova said.

She recalled that the victory in the presidential elections in 2019 was ensured by the Russian-speaking population of Ukraine to Zelensky, and now he is trying to get rid of voters, whom he promised to achieve peace in the country.

“Instead of uniting Ukraine and its multinational people, Zelensky is throwing a stone of discord at the people, finishing off the country,” explained an official representative of the Russian Foreign Ministry.

Ukrainian President Volodymyr Zelenskiy's call for pro-Russian Donbass residents to leave the region only exacerbates the rift between Kiev and the country's southeast.

This opinion was expressed in an interview with RT by the first deputy head of the international committee of the Federation Council Vladimir Dzhabarov.

“In fact, Zelensky expressed what many Ukrainian politicians have already said more than once, especially from among the“ Natsiks ”and“ Westernizers ”- that they need the land of Donbass, but they do not need the people who live on it.

The approach is not only strange, but criminal in relation to the population of their country.

Therefore, I think that they themselves are pushing the residents of Donbass towards self-determination, ”said Dzhabarov.

The Russian senator said that he did not understand why the natives of Donbass should leave the land where their ancestors lived, where they raise their children, where they have their own property and economy.

They didn't ask for independence or anything like that.

Therefore, this conflict is only getting worse, and Zelensky is not original in his proposals, ”explained the member of the Federation Council.

Also on russian.rt.com "Visibility of violent activity": why Zelensky announced the possibility of a complete break in relations with the LPR and DPR

Earlier, the President of Ukraine Volodymyr Zelensky in an interview with the Dom TV channel advised the residents of Donbass, who consider themselves Russian, to leave for Russia.

According to him, it would be a "big mistake" for these citizens to stay in this region, since it "will never be Russian territory."

It doesn't matter how long it will be occupied, do you understand?

In any case, people, history will seize the moment - and the wall will fall, ”he said.

The head of state stressed that there will be no civilization in Donbass without Ukraine.

“Therefore, I believe that if you love Russia and have been on the territory of Ukraine all your life and felt that this is Russia, then you must understand that in the name of your children and grandchildren you already need to go and look for a place in Russia.

This is correct, "Zelensky added.

A few days ago, Volodymyr Zelensky also called Crimea “his land” in an interview with the Dom TV channel, saying that this territory would “never be Russian”.

He also expressed the opinion that Russians "will never love Crimea as much" as Ukrainians.

We add that during his inaugural speech in May 2019, Vladimir Zelensky called on the nation to unite, and those who went abroad to return home.

He called the end of the war in Donbass his primary task, adding that for this purpose he is even ready to lose his post.

Speaking about Crimea and Donbass, Zelensky stressed that "this is Ukrainian land."

“We have lost not only territories, we have lost the most important thing - people.

And today we just have to - I'm sure they can hear us - return their consciousness.

We have lost this consciousness.

Over the years, the authorities have not done anything to make them feel like Ukrainians, ”he said.

Recall that Crimea became part of Russia as a result of the referendum held in March 2014 - the majority of the inhabitants of the peninsula spoke in favor of reunification with Russia.

At the same time, Russian officials have repeatedly noted that the issue of Crimea is closed, since it is a constituent entity of the Russian Federation.

At the same time, about 30 thousand people were injured.

"Zelensky has no right to make such statements"

That Crimea was not Russian, now, it turns out, there are no Russians in Donbass either.

Zelenskiy has neither the political nor the moral right to demand from the regions that expressed their point of view in the referendum to submit to his will.

And what kind of love for Crimea and Donbass can the Ukrainian president speak of, on whose orders the civilians of Donbass are fired on every day, and the Crimeans are forced to fight a water blockade.

This is a man with two masks: in one he asks the West for money to "take care" of the population, and in the other he demands to erase all dissidents into dust, "the interlocutor of RT stated.

In turn, Deputy Speaker of the State Duma Pyotr Tolstoy mocked Volodymyr Zelensky's statement, urging Ukrainian citizens who want to live in Europe to leave the country and "look for a place in the EU."

“Ukraine in its current form - occupied, cut off from Russia - has no prospects.

This land will still be de-occupied in any case, ”he wrote in his Telegram channel.