Finnish skater Lizzie Armanto did not make it to the finals in Park. Japan took a triple victory. 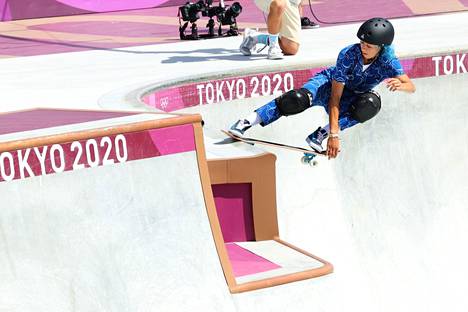 When Lizzie Armanto started skating at the age of 14 in Santa Monica, California, she wasn’t thinking about the Olympics.

And maybe not even Finland.

However, it so happened that on Tuesday morning, 28-year-old Armanto represented his father's homeland, Finland, in the Olympic arena of skating and did so even when dressed in an outfit whose patterns he had hidden thanks to Finnish design.

Armanto skated with his best bet of 30.01 points and was 14th in the race.

In the final, the brightest medals went to Japan.

Lizzie Armanto said she was glad she was able to skate at the Olympics.

Armanto said he was proud of the race.

He came with an open mind to his first Olympics and was happy with an experience that few have.

Armanto was badly injured in October just nine months ago.

The femur fractured and he had to learn to walk again in January.

- I have improved in such a way that the bones are in good condition, but skating is not yet 100%, Armanto said.

Read more: Lizzie Armanto struggles for Olympic gold at night - less than a year after her wild accident

But from that outfit!

He presented it to his American friend Thomas Church, who was visiting Finland.

He was a landscape architect and designed a kidney-shaped pool for the garden of Jean and Dewey Donnell’s home.

Much was written about the house, its decor was admired and the style was copied.

One of the most copied things was the swimming pool in the house, which became a symbol of the modern California lifestyle, Helsingin Sanomat's Monthly Supplement reported in 2014.

In the 1970s, California was plagued by drought and water had to be saved.

The pools were empty, and skateboarders fell in love with the cornerless pools where they could do new kinds of tricks.

It affected the development of the whole species.

At the Tokyo Olympics, Lizzie Armanto stepped into the competition arena in a blue-and-white outfit that combined the history of skateboarding, Finnishness and fashion, which is also an integral part of the subculture.

Armanto's short-sleeved and two-piece trousers had white patterns on an electric blue background.

The message of living further away is not so clear, but when viewed up close, the connection is obvious to Finns: Some of the patterns resemble Aalto's swimming pool, others recall the shape of the Aalto vase seen from above.

Armanto said he designed the outfit himself.

The Olympic collection has a total of 14 parts when the coach's equipment is included.

- He (Lizzie) wanted to pay tribute to Finland and how Alvar Aalto's design has affected the world of skateboarding, Carl Harris said in an e-mail to IS.

The basic equipment of all Finnish athletes comes from the Olympic team, but the actual competition uniforms always come from the sports federation that the athlete represents.

Since there was only one skater, the Skateboard Association gave Armanto free rein.

- I want to wear clothes that make me feel comfortable, Armanto said.

Armanto stated that in competitions, clothes must look like their wearer.

It’s not always that way, and it makes people look funny.

Earlier in the summer, in an interview with Nylon magazine, Armanto said that his shoe collection with shoe brand Vans was inspired by Alvar Aalto.

Aalto's design language has something the same as in skate parks, Armanto said in an interview.