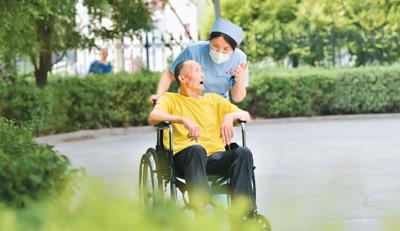 Covering more than 1 billion people, the old-age security network is becoming denser and denser (a dream of a well-off society⑧)

The picture shows the medical staff of the Weixian Medical and Nursing Comprehensive Demonstration Base accompany the elderly to relax outdoors.

The pension has gone up again!

By the end of June, all the pensions adjusted and increased in 2021 had been paid in place, and the national enterprise employee pensions had achieved "17 consecutive increases", and the old-age security had become more solid.

At present, China has 264 million people aged 60 and over, accounting for 18.7% of the total population.

When the "silver hair wave" is oncoming, how to let them enjoy a happy and happy old age has become a well-off question that must be answered.

——The coverage of basic pension insurance increased from 98.48 million in 1993 to 999 million in 2020, reaching 1.014 billion at the end of June this year, and about 290 million people receive basic pensions on a monthly basis

"Look, this is my'salary card.'" Lao Li, a farmer from Hunan who was more than a few years old, pulled out his collection of social security cards from the box and smiled.

Being able to receive a pension every month makes this farmer who has never left the land very moved.

"We farmers can also receive pensions. I really didn't dare to think about it in the past!" said Li Lao. In the rural areas, this fixed income of more than 100 yuan per month is very impressive. There are more sources of basic living, and the state guarantees it. It feels different.

Now, there are more than 540 million people like Mr. Li who have participated in the national basic pension insurance for urban and rural residents.

Establish a basic endowment insurance system for enterprise employees, start a new agricultural insurance pilot, merge the new agricultural insurance and urban home insurance, implement the "Social Insurance Law of the People's Republic of China"... China has established an endowment insurance system from scratch; expanded from urban to rural areas, Expanding from state-owned enterprises to other types of enterprises, from employed groups to non-employed groups, the old-age security network is becoming denser and denser.

In China, the coverage of pension insurance has increased from 98.48 million in 1993 to 999 million in 2020, and nearly 290 million people receive basic pensions on a monthly basis.

This year, the number of people participating in basic old-age insurance has further increased, reaching 1.014 billion at the end of June.

Zheng Gongcheng, a professor at Renmin University of China, believes that my country has become the country with the fastest development of social security, the largest coverage of the population, and the largest continuous increase in security in the world today.

It's not just the wide coverage of old-age care.

The construction of the new rural cooperative medical system began in 2002, and the pilot medical insurance system for urban residents was launched in 2007. The basic medical insurance network has a population of 1.36 billion insured persons, with a stable coverage of more than 95%, which is even more valuable for the elderly. Protection.

There is also a minimum living security system, which provides relevant subsidies to the elderly and disabled elderly who are financially difficult, and so on. The warmth of the people's livelihood is transmitted to thousands of households.

"More than 1 billion residents have been included in the scope of social security, and they have begun to receive pensions, reimbursement for medical expenses, and enjoy subsistence allowances. It is unprecedented for urban and rural residents to provide for the elderly, the sick, and the weak. Zheng Gongcheng said that this reflects a qualitative leap in the development of people's livelihood in China, which has a population of more than 1.4 billion.

"Accelerate the improvement of a multi-level social security system that covers all people, coordinates urban and rural areas, is fair, unified, and sustainable"-the beautiful blueprint outlined in the "14th Five-Year Plan" outline, which makes people more confident in the future.

——The average monthly pension for employees of enterprises has increased from 1,686 yuan in 2012 to about 2,900 yuan in 2020; during the "14th Five-Year Plan" period, we will continue to promote "a steady increase in the level of social security benefits"

While expanding the encirclement and widening coverage, the "gold content" of social security benefits is also constantly increasing.

The rise in basic pensions, which has received much attention in recent years, is the most vivid example around.

Qiu Qingxuan of Jiangxi Ruijin is a corporate retiree. He is 68 years old this year. He has personal experience of the improvement of pension insurance benefits for corporate employees.

When he retired in 2014, his average monthly pension was less than 2,000 yuan. Over the years, his pension has risen year after year, and now it has increased to more than 3,000 yuan.

"This year the state continues to increase pensions for our corporate retirees, and we have caught up with the good times." Qiu Qingxuan said.

Statistics show that since 2009, the minimum basic pensions for urban and rural residents have increased from 55 yuan, 70 yuan, and 88 yuan to 93 yuan per month.

It is understood that pension adjustments mainly consider factors such as increase in average wages of employees, rising prices, and fund support capabilities.

On the basis of guaranteeing the basic livelihood of retirees, they are also allowed to appropriately share the fruits of economic and social development.

In addition to basic old-age insurance, in order to actively respond to the aging of the population and make pension money more practical, in recent years, a multi-level old-age insurance system has been developed.

As the second pillar, the enterprise annuity and occupational annuity systems have been initially established and gradually improved.

By the end of 2020, 105,000 enterprises across the country have established enterprise annuities, and 27.18 million employees have participated.

The market-oriented investment operation of occupational annuity funds was launched. At the end of 2020, the investment scale was 1.29 trillion yuan, and the annual cumulative income was 101.047 billion yuan.

As the third pillar, the personal pension system is also being explored and started.

The relevant person in charge of the Ministry of Human Resources and Social Security stated that they will step up to promote, introduce and implement as soon as possible to meet diversified needs and better guarantee the happy life of the elderly.

Looking forward to the future, the main arrangements for the "14th Five-Year Plan" period have been clarified. Not only has the level of social security benefits steadily increased" as one of the main goals, it has also proposed to fully implement the basic pension insurance benefits for urban and rural residents and the normal adjustment mechanism of basic pensions. It will also gradually increase the basic pension standards for urban and rural residents, increase the coverage of corporate annuities, and promote the development of personal pensions... A series of new measures will make people's livelihood security stronger.

——By the end of 2020, there will be 319,000 elderly service institutions and facilities nationwide; local governments at all levels have invested 474 million yuan to complete the age-appropriate transformation of 163,400 elderly families with special difficulties

There are old people in every family, and everyone will get old.

Staying in the old age requires not only material security, but also elderly care services, especially for the elderly and disabled elderly who are financially difficult.

Li Yinjiang, the dean of the nursing home in Guiwu Town, Xuyi County, Huai'an City, Jiangsu Province, has worked in the nursing home for many years and has personally witnessed the progress and development of social elderly care services.

Li Yinjiang remembered that he was adjusted to his current position in 1986. "On the day of registration, the government only gave me 4.2 acres of wasteland, and there was no brick or tile on the ground."

They set up their own shack and built a nursing home with 11 houses in 90 days.

"After years of hard work, nursing homes have grown from small to large." Li Yinjiang introduced that the building area of ​​nursing homes has increased from more than 200 square meters to the current 2,700 square meters, and the area has expanded 10 times. In the past 35 years, it has directly served the needy people 2 More than 10,000 people provide a warm place for the elderly to spend their old age.

The growth of a nursing home is the epitome of the development and changes of social care for the elderly.

According to the relevant person in charge of the Ministry of Civil Affairs, before the end of 2022, each county will ensure that at least one county-level nursing home with disability care is established to give priority to meeting the care needs of the disabled and extremely poor.

As of the end of 2020, there were 319,000 elderly service institutions and facilities nationwide, with more than 8.2 million beds.

In view of the fact that most elderly people tend to care for the elderly at home, relevant departments support regions to carry out pilot reforms of home and community elderly care services.

By the end of 2020, local governments at all levels had invested a total of 474 million yuan to complete the ageing transformation of 163,400 elderly families with special difficulties.

Taking advantage of the development of the elderly care industry, in 2014, Li Yinjiang led everyone to integrate the resources of nursing homes and set up the first rural regional elderly service center in Xuyi County.

They open up the surplus beds to the society and solve the problems in life for the empty-nest left-behind elderly.

Li Yinjiang said that in the next step, he would also like to leverage on rural revitalization and put up a home care sign in new rural communities, provide three meals a day, spiritual care for the elderly in the community, and deliver high-quality services to the door.

From institutional services to home care for the elderly, from cities to villages, richer choices and more considerate services will enable more elderly people to enjoy the development dividends of the times. Ann.