Tokyo2020, two Azzurri in the final in the Triple. Desalu enters the semifinals of the 200 meters

On August 3, eyes focused on Desalu, qualified in the 200 meters, on Italian sailing already on the podium, the team pursuit of track cycling - today the women's podium and the men's semifinals with the blue teams as protagonists - and for the first knockout battles in men's basketball and volleyball 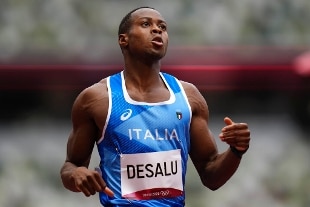 Andrea Dallavalle (16.99, wind -0.4) and Emanuel Ihemeje (16.88, -0.7) won a place in the final of the triple, placed respectively in seventh and ninth place in the qualification of the hop-step-jump. Out instead Tobia Bocchi (16.78, -0.1), thirteenth and first of the excluded, mocked in the final round and eliminated by 5 centimeters.

Immediately a good start by the Azzurri. In the first round,

Eseosa Desalu qualified for the semi-finals of the 200 meters

of the Tokyo Olympics after scoring an excellent 20 "29 in the battery, fourth time of the entire first round. The blue raced in the fastest battery, the sixth, won by American Kenneth Bednarek in 20 "01 ahead of the Dominican Yancarlos Martinez (20" 17). The American star Noah Lyles got the third time, 20 "18. Eliminated the other Italian in the race, Antonio Infantino with 20 "90, 34 / o time of the round. The semifinal is scheduled at 20.50 (local time), 13.50 in Italy.

Eighth and last position, finally for

Alessandro Sibilio in a final of 400 obstacles

dominated by the Norwegian Karsten Warholm, gold medal with a new world record in 45 "94. Final with five circles without podium also for

was unable to qualify for the final of the K1

1,000 meters finishing 5th in his semifinal.

was restless and lead to medal.

are already certain of the podium in Nacra 17: in the medal race the Italian sailors, currently at the top of the general classification, can only be overtaken by the British John Gimson and Anna Burnet. Great expectations also for the

: in the quarterfinals Sacchetti's blues dream of a feat against France, while Blengini's national team is favored against Argentina.


The medal table of Italy at the Tokyo 2020 Olympic Games: