His Highness Sheikh Mohamed bin Zayed Al Nahyan, Crown Prince of Abu Dhabi and Deputy Supreme Commander of the Armed Forces, and His Majesty King Hamad bin Isa Al Khalifa, King of the sisterly Kingdom of Bahrain, discussed the close brotherly relations between the two brotherly countries, and the level of cooperation and joint action reached at the level of cooperation and joint action. 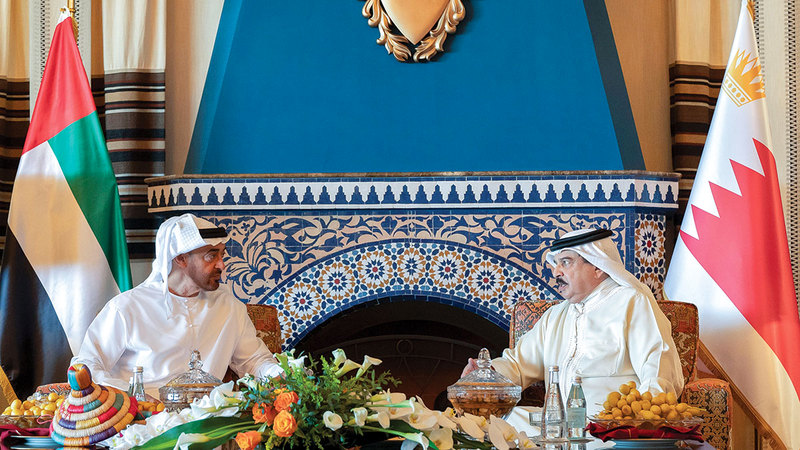 Crown Prince of Abu Dhabi: The brotherly relations between the UAE and Bahrain are getting stronger

His Highness Sheikh Mohamed bin Zayed Al Nahyan, Crown Prince of Abu Dhabi and Deputy Supreme Commander of the Armed Forces, and His Majesty King Hamad bin Isa Al Khalifa, King of the sisterly Kingdom of Bahrain, discussed the close fraternal relations between the two brotherly countries, and the distinguished level of cooperation and joint action reached. And ways of developing it in all fields, to achieve their aspirations for progress and development, and their mutual interests, in addition to a number of issues and topics of common concern.

This came during the reception of His Majesty King Hamad bin Isa yesterday, His Highness Sheikh Mohammed bin Zayed Al Nahyan, and the accompanying delegation, which included His Highness Sheikh Hamdan bin Zayed Al Nahyan, representative of the ruler in the Al Dhafra region, at the Sakhir Palace, in the presence of His Royal Highness the Prince. Salman bin Hamad Al Khalifa, Crown Prince and Prime Minister of the Kingdom of Bahrain.

His Majesty welcomed the visit of His Highness and the accompanying delegation to his second country, Bahrain, and they exchanged cordial conversations about the deep-rooted fraternal relations that unite the leaderships of the two countries and their brotherly peoples, and which are based on bonds of kinship and love, and a firm belief in the unity of destiny and joint cooperation.

His Highness Sheikh Mohamed bin Zayed Al Nahyan conveyed to His Majesty the greetings of his brother, His Highness Sheikh Khalifa bin Zayed Al Nahyan, President of the State, and his wishes for good health and happiness, and for the Kingdom of Bahrain and its brotherly people continued prosperity and prosperity under the wise leadership of His Majesty.

For his part, His Majesty the King of Bahrain conveyed his greetings to His Highness, the President of the State, and his best wishes for continued health and wellness.

His Highness Sheikh Mohamed bin Zayed Al Nahyan stressed that the brotherly relations that unite the UAE and the Kingdom of Bahrain are getting stronger thanks to the keenness of their joint leadership to develop them at various levels, noting that the UAE-Bahraini relations are one of the most important pillars of cooperation and joint Gulf and Arab work. It derives its strength and privacy from the common constants and visions of the two countries towards many situations and issues in the region.

His Highness also affirmed mutual keenness to continue coordination and fraternal consultation with Bahrain, for the benefit of their peoples and the peoples of the region.

For his part, His Majesty King Hamad bin Isa Al Khalifa affirmed the depth of the brotherly relations between Bahrain and the sister Emirates, and the extended history between the two brotherly countries and peoples based on them, following the approach of the founding fathers, and the history that brought them together from bright spots, bilateral relations and common positions. The constant that laid the first building blocks for this approach, which the sons of the two brotherly countries are keen to preserve.

His Majesty praised the high level of relations between the two brotherly countries, the continuous coordination, ambitious identical policies and a joint strategic vision to stabilize security and stability in the region.