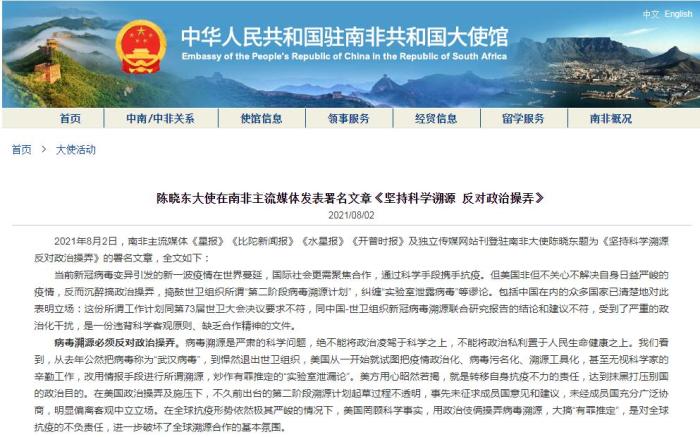 At present, a new wave of epidemics caused by the mutation of the new crown virus is spreading around the world. The international community needs to focus on cooperation and join hands to fight the epidemic through scientific means.

However, the United States does not care about not solving its own increasingly severe epidemic. Instead, it indulges in political manipulation, fiddles with WHO's so-called "Phase 2 Virus Traceability Program," and entangles with fallacies such as "the laboratory leaks the virus."

Many countries, including China, have clearly stated their position on this: This so-called work plan does not meet the requirements of the 73rd World Health Assembly resolution, and does not meet the conclusions and recommendations of the China-WHO Joint Research Report on the Traceability of the New Coronavirus. It is a document that violates the principles of scientific objectiveness and lacks the spirit of cooperation.

Image source: Screenshot of the official website of the Chinese Embassy in South Africa

The source of the virus must be opposed to political manipulation.

We have seen that from openly calling the virus the "Wuhan virus" last year to outrageously withdrawing from the WHO, the United States has tried to politicize the epidemic, stigmatize the virus, and instrument the traceability from the very beginning, even ignoring the hard work of scientists. Switch to using intelligence methods for so-called traceability and hype the "laboratory leak theory" of presumption of guilt.

The U.S. intentionally made it clear that it is to shift its responsibility for its ineffective fight against the epidemic and achieve its political goal of discrediting and suppressing other countries.

Under the political manipulation and pressure of the United States, the drafting process of the second-stage traceability plan introduced not long ago was opaque, without soliciting the opinions and suggestions of member states in advance, and without sufficient and extensive consultation by member states, which clearly deviated from an objective neutral position.

Virus traceability must uphold the spirit of science.

Exploring the origin, spread and evolution of the new coronavirus that is raging around the world is a difficult topic facing the international scientific community. The scientific research evidence process is complex and requires a large amount of biological information and epidemiological evidence to converge into a mutually supporting evidence chain, which is time-consuming and exists. Uncertainty.

Only by promoting early case search, molecular epidemiology, animal (intermediate) host introduction and other traceability studies in multiple countries and regions around the world, and fully guided by scientific evidence, will it be more hopeful to find the most likely origin of the virus.

A series of studies have shown that traces of the virus appeared in the United States, Spain, France, Italy, Brazil and other countries earlier than the first case in Wuhan.

All this shows that the tracing of the new coronavirus is a complex scientific issue, which should be carried out in cooperation with the international scientific community based on a global perspective.

China has always participated in international traceability cooperation with an open attitude.

China has twice invited WHO experts to China to conduct joint research on traceability, and has made great efforts to this end.

After a 28-day field visit to China at the beginning of the year, in March this year, a WHO-China joint expert group composed of 34 experts from multiple countries released a joint research report, which reached a scientific conclusion that “a laboratory leak is extremely unlikely”, and Put forward important suggestions such as "searching for possible early cases worldwide" and "studying the possibility of cold chain transmission of viruses".

The conclusion of the research report on the source of the virus is a scientific, objective and authoritative conclusion drawn by Chinese and foreign experts through a large number of serious and meticulous research work, which has been recognized by the international community and the scientific community. It marks the current stage of China's new coronavirus traceability research. Scientific conclusions, this should be an important basis for the next stage of global traceability work.

The first phase has already been carried out, especially the research with clear conclusions, the second phase should not be repeated.

The traceability of the virus should heed the voice of justice from the international community.

The purpose of tracing the source of the new crown virus is to clarify the source of the virus so that effective measures can be taken to prevent similar epidemics from recurring, not to blame a certain country, let alone divide the international community.

Attempts and actions to stigmatize the epidemic and politicize the traceability will only be resolutely opposed by the international community and will not succeed.

So far, nearly 60 countries have written to the WHO, agreeing with the first-stage traceability research results and opposing the politicization of traceability.

We are pleased to see that the ANC (to be determined) and the South African Communist Party have issued a statement on this. Many government officials, experts and scholars in South Africa have recently actively spoken out, demanding a comprehensive reflection on the new crown epidemic and opposing the politicization and stigmatization of traceability. And ideological.

This is an objective, scientific, and just voice, and it should be valued and listened to.

South Africa has also suffered from virus stigma and labelling.