Belarusian rioter went public: "I just expressed my dissatisfaction" - does not reveal his whereabouts for security reasons

Krystsina Tsimanouskaya, a fast runner who has been granted asylum in Poland, tells the New York Times that she has no political goals. 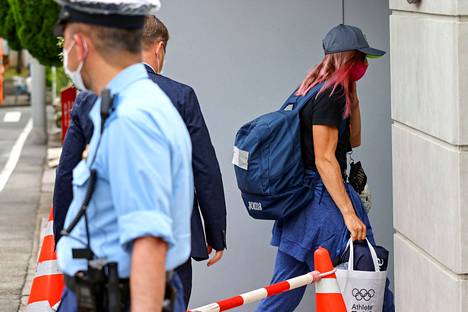 Belarusian sprinter Krystsina Tsimanouskaya has commented on her situation to the public.

Tsimanouskaja, 24, was granted asylum in Poland after the leadership of the Belarusian Olympic team tried to pressure him to return to his home country in the middle of the Games.

The background was Tsimanouskaja's criticism of the country's coaching leadership on Instagram.

The sprinter refused to board the return flight for his safety.

Tsimanouskaja commented on his situation in an article published by the New York Times on Tuesday.

He refused to reveal his whereabouts in a telephone interview for security reasons.

The sprinter stresses that there was no political agenda in his criticism of the coaching leadership.

- I just expressed my dissatisfaction with the coaching staff, who decided to report me to the message team without telling and asking if I am ready to run, Tsimanouskaya tells the newspaper.

On Monday, Krystsina Tsimanouskaya arrived at the Polish Embassy in Tokyo carrying a bag distributed to Olympic athletes and the police secured her trip.

Tsimanouskaja was reported to the message team because some members of the actual message team could not get to the starting line due to deficient doping testing.

The sprinter did not digest the decision, but criticized the coaching leadership with an Instagram video.

After that, the team management announced that the races were over for him.

The order was said to have come from a “higher party”.

An audio tape recorded of a conversation between Tsimanouskaja and the leadership of the Olympic team leaked to the public.

Read more: Cold ribbon revealed: This is how Belarusian sports bosses “persuaded” an asylum-seeking sprinter - hinted at jumping off the balcony

On the tape, Tsimanouskaya is accused of going to criticize the team management for publicity about the athlete selections in the running.

- You are guilty of the accusations and comments you have made.

Do you understand that you have accused people all over the country before you have figured things out.

But you will be forgiven, we want to help you, says Artur Shumak, deputy director of the Belarusian Athletics Olympic Training Center.

The tape also hints that Tsimanouskaya might end his day by jumping off the balcony if he doesn’t agree with the demands of management.

Krystsina Tsimanouskaya with police at Tokyo Haneda Airport on Sunday.

When Belarus began arresting people taking part in protests against the country’s leadership in the fall of 2020, about a thousand athletes from the country demanded in an open letter new, open elections and an end to the torture and detention of peaceful protesters.

Tsimanouskaya points out to the New York Times that he was not one of the signatories of the petition.

- I just wanted to prepare for the Olympics.

I didn’t sign anything so no one would bother me.

Krystsina Tsimanouskaja has run 100 meters faster than the Finnish record.

Belarusian sprinter Krystsina Tsimanouskaja had only one start in the Tokyo Olympics.

It went to the bottom edge of his plane.

Tsimanouskaja placed fourth in the sixth inning of the 100m with a time of 11.47 and was eliminated from the sequel.

Tsimanouskaya, 24, is a better runner than one might infer from that performance.

In Finland, he would be at the forefront of express travel.

According to statistics from the International Athletics Federation, Tsimanouskaja’s best time this season at 100 meters is 11.22.

He was also scheduled to compete in Tokyo in the 200 meters, with his season’s best quote of 23.17.

Both times are better than Finland's best results this season, Lotta Kemppinen 11.33 and Anniina Kortetmaan 23.42.

In 2017, at the age of 20, Tsimanouskaja placed silver in the European Championships for under-23s.

In the same summer, he competed in the Paavo Nurmi Games in Turku and reached the second place with a time of 11.31.

The following year, Tsimanouskaya won the 200-meter student universiade, which usually has a tough level on express trips.

He has studied sports science in Minsk.

In 2018, he ran a hundred records of 11.04, which is nine hundredths better than Helinä Marjamaa's 38-year-old Finnish record.

Tsimanouskaja is a multiple champion of the country at 100 and 200 meters, but this and last season his performance has not been as good as in 2018 and 2019.

In the 2018 European Championships, Tsimanouskaja ran in the semi-finals with both 100 and 200 meters, but did not make it to the finals.

Since 2019, Tsimanouskaja has been coached by the Austrian Philipp Unfried.

According to athletes from the Tokyo Olympics, Tsimanouskaja started the sprint at the age of 14.

- I've always liked running in the yard with the boys, and I often beat them.

I had the opportunity to take part in a local competition and I won it.

Then I went to regional competitions where my coach noticed me and invited me to the university team.

I asked my parents for permission for a long time, and eventually they let me go, Tsimanouskaja told her homeland Sportbass in 2019.

Tsimanouskaja's wife Arseniy Zdanevich has reassured the media in recent days that the couple has not been involved in politics in Belarus in any way.

- We have never had any contact with the opposition.

We are normal sports people.

We invest in sports and are not interested in the opposition movement, Zdanevich told British news channel Sky News.