Russia's way of circumventing the rules speaks in Tokyo - "Russia should have been shut down for sports," says the expert, and that's why it's not wanted to do so

Russia should not be seen and heard at the Tokyo Olympics, but it is doing so. Former anti-doping boss Harri Syväsalmi says the rules are not the same for all countries. 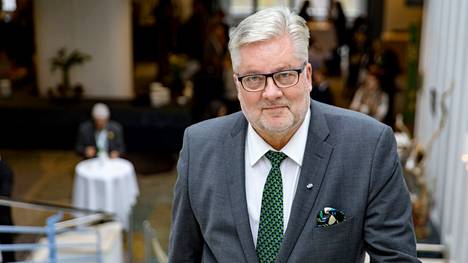 Inna Deriglazova strikes a decisive sting in the upper body of Ysaora Thibus and spreads her hands for wild ventilation.

The final of the women's fencing team competition for fencing has ended in favor of the ROC.

Deriglazova’s white race uniform has a large Russian Olympic Committee logo in Russian colors on her thigh and arm.

It will take a moment, if not another, for the organizers to tune the podium for the fencing arena to the center of the lights at Makuhari Messe Hall.

The ROC team steps behind the middle podium.

Athletes ’outfits consist of red pants and a top with a white main color and purple stripes.

Outfit recognizes the team as Russia better than the French team that won silver.

Medals will be awarded.

If the Russians' first option had gone through, now the loudspeakers would have become the more patriotic Katjusha.

Larisa Korobeinikova sweeps her eye corner with the podium.

The ROC has once again taken one Olympic medal.

Russia should not be seen and heard in these competitions, but it is doing so.

It was originally allowed to participate in neutral colors, without the symbols of its own country.

In stadiums, announcers should talk specifically about the ROC, not say the Russian Olympic Committee.

This is so that the word Russia is not used in connection with the Olympics.

In Tokyo, however, it has not become unclear which country many successful people will come from.

The racing uniforms of the Russians are like Russian flags, the announcers are slipping.

Even at the opening of the Games, the team of the Russian Olympic Committee, not the ROC, was presented to the whole world.

The World Anti-Doping Agency (WADA) is disappointed with the way Russian colors are reflected in the Tokyo Games.

The World Anti-Doping Agency (WADA) is disappointed with the way Russian colors are reflected in the Tokyo Games.

- In particular, we are very disappointed that Cas (International Court of Appeal for Sport) gave a freer hand in this matter, said James Fitzgerald, Wada's communications manager.

- Wada demanded that the Russians participate in neutral-colored clothing, but Cas decided that the costumes may have the colors of the Russian flag.

Fitzgerald says that after Cas’s decision, outside and independent parties evaluated the race outfit proposed by Russia, and the decision was unanimous.

In its statement before the Games, the International Olympic Committee (IOC) stated that the Russians' costumes complied with the guidelines.

However, not everything has gone through the Russians.

When the country’s skating team asked permission to use the song From Russia With Love in its performance, the IOC agreed on one condition: the word Russia should be edited out, according to The New York Times.

That is not a good question.

The Russians do not want to answer those questions.

The Italian men’s volleyball team walks through the interview area after winning a Japanese first-round match.

Italy is a traditional volleyball country and one of the favorites in almost every tournament.

Players are happy to comment on the events of the match, but when asked about Russia and the colors used by the Russian team, the comments are cautious.

- It is not my job to comment on this topic, it is my job to play volleyball.

Have the sanctions against Russia been sufficient?

It is not my job to judge it.

These things are punished by various parties.

I’m not a politician, Anzani says politely and goes for a walk towards the locker room.

The ROC has started the men’s volleyball tournament in Tokyo convincingly.

In Wednesday’s late-night struggle, the ROC crushed Brazil, number one on the world list.

ROC players have not been very enthusiastic about commenting in English before in the tournament.

I approach one Russian journalist to see if he could ask what it feels like to play with the ROC name and without the flag of his own country on the shirt chest.

However, the supplier does not agree.

- That's not a good question.

The Russians don’t want to answer those questions, he says.

The Russian Olympic Committee prepared the country’s athletes for such issues before the Games.

Athletes were given instructions on how to comment if journalists ask about politics or doping.

The matter has been reported by Vedomosti magazine, which became acquainted with the guidelines.

According to it, the best way to answer is to not answer at all.

That's a good joke on the team.

There are things that cannot be influenced and it is pointless to sacrifice energy for them.

According to the Russian Olympic Committee, journalists ’questions could be provocative and put Russians in a bad light.

Athletes were also advised to be careful when using social media.

The Olympic Committee has provided the Russians with ready-made answers to questions about, among other things, the Black Lives Matter movement for black rights and reminded that there is no need to comment on Crimea and similar issues.

How does it feel to play with the ROC name and without the Russian flag on a shirt?

- We know our nationality.

That name and colors don’t matter much, Kobzar says in English, laughs lightly and continues on his journey.

The size of a Finnish volleyball is at home in Russia and answers questions in fluent Russian.

- We have not focused on this issue in any way, but on doing our own thing, he says.

That's a good joke on the team.

There are things that cannot be influenced and it is pointless to sacrifice energy for them.

Sammelvuo says the Russians in the Games are not being blamed for anything.

- Politics is politics, we focus on sports.

"Russia should have been excluded from international sports because of the fraud in Sochi."

Harri Syväsalmi, former Secretary General of Suek and Wada, says that learning about doping in Russia has been very slow.

"It's not about solving individual cases, it's about a big cultural change that will take years."

Russia was once punished for a systematic and state-run doping program.

It has been one of the biggest and most furious doping scams in sports history.

The tangle began to unravel after the 2014 Winter Olympics in Sochi.

Harri Syväsalmi will return in time to 2016. At that time, a dozen anti-doping agencies around the world suggested to the IOC that Russia be excluded from the Rio Olympics.

The Finnish Sports Ethics Center Suek was one of these offices.

That did not happen.

With the exception of athletes, Russia was seen in the games as usual.

- The IOC then painted itself in a corner.

It is now known that it did not get out of there without messing itself up, Syväsalmi describes.

Syväsalmi is the former Secretary General of Suek and Wada.

None of them have been as they should have been originally, Syväsalmi says.

Indeed, Syväsalmi says that the IOC's decisions in the Russia case went from the beginning to the wrong career.

In his view, the International Athletics Federation World Athletics has been the only one to put Russia on the toughest to bring the country’s anti-doping work to an appropriate level.

So what should the IOC have originally done?

- Russia should have been excluded from international sports due to the fraud in Sochi.

The IOC had no desire or understanding for that, and it began to make half-hearted solutions.

We are still on that road, Syväsalmi states.

- If it had been Kiribati, it would certainly have been closed.

The world's anti-doping rules have not been made different for different countries, but in practice they are.

According to Syväsalmi, one such half-witted decision is to compete with the Russians as so-called neutral athletes.

The Russians will not be allowed to compete under their own flag in the next Winter Olympics either.

Wada gave the Russians a four-year collar in the dignitaries in late 2019. A year later, the International Court of Appeal for Sport Cas commuted the sentence to two years.

Russian athletes also no longer had to separately prove their innocence in order to enter the doping competition.

It did not promote anti-doping work, Syväsalmi says.

"Politics is politics, we focus on sports."

Cas addressed his decision to the Russian leadership.

The country’s president, Vladimir Putin, and ministers have nothing to do with the Tokyo Games.

So why has the IOC not been tougher?

Syväsalmi ponders that countries like Russia, China and Qatar have begun to become the few states that are able and willing to host mega-class sports competitions, such as the Olympics.

Therefore, the threshold for punishing Russia harshly is high.

- International sports need to be understood to do a U-turn and return to the competitions of reasonableness, he says.

Syväsalmi takes the example of ball halls used in the Olympics, which are also large and prame in Tokyo.

- Sports federations dictate the conditions for how much spectators should fit in, for example, volleyball and basketball.

They also need to understand that races need to be scaled down.

We have to be content with good but more modest conditions, and remember that television is what watches the Games.

There are 330 Russian athletes in Tokyo, and they participate in 30 sports.

Success is visible and heard.

In the medals table, the ROC is fourth, and it has not been unclear to anyone to which country the medals have actually gone.