Lazio Region, we run for cover after the weekend hacker attack

The vaccination campaign is proceeding regularly while the postal police investigate the origin of the accident. Likely causes ransomware, but there is currently no ransom note. The Health Lazio site unreachable 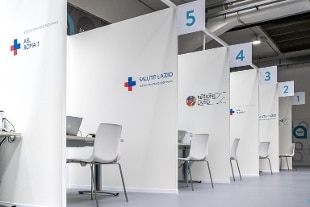 02 August 2021 "The vaccination campaign is proceeding and will continue regularly, there has been no interruption and there will not be in the next few days. The hacker attack failed to stop the Lazio vaccination campaign". The councilor for Health and Social and Health Integration, Alessio D'Amato, underlines this in a note. in the aftermath

of the hacker attack on the computer systems

of the Lazio Region, which particularly affected the covid vaccine booking system.

The attack on the weekend

The alarm was triggered on Sunday morning: the computer systems of LazioCrea were hit and all the reference sites - Lazio Region, Lazio Salute, book vaccines - were inaccessible. The Lazio Region site is

and booking of vaccines and molecular swabs is not possible via the online platform. It is not possible to access any service connected to the health of the Lazio Region.

"We have reported the attack to the authorities and I thank all the employees who have been at work since tonight to defend the plant and to return to normal", assured the governor of Lazio Nicola Zingaretti, while the complaint to the postal police was immediately triggered. opened an investigation. In the next few hours, a file is expected to be opened in the Prosecutor's Office on the computer incident.

The councilor for health Alessio D'Amato however confirmed that "all technical verification activities are underway to restore the operation of the systems in total safety ".

A computer virus asking for ransom

Investigators confirm that it is

, but no ransom demands have been received. There was a request for payment in bitcoin, but there is perplexity on the part of investigators because it arrived after the news came out and not at the same time as the attack, as happens in these cases.

It could have been an email, or a click on a link that stopped the Lazio Region website. According to experts, a simple but effective cyber attack. Ransomware is malware,

, which is installed on the computer when an infected file is downloaded and which 'obscures' all contents: files, folders, documents with an encryption. It is enough for one of the recipients to open a malicious attachment or click on a compromised link: the malware is downloaded to the user's computer and begins to expand on the system. It is not the first case: the most recent - and devastating - one dates back to last May, which

Targets on the rise

At the moment the details of the attack on the Lazio Region are not known but everything suggests that something similar has happened. In this case, the infecting code (malware) has one more feature: it blocks systems by encrypting them and the attacker usually asks for the payment of a sum (ransom, in English, or ransom) to 'free' it. An increasingly urgent problem for companies but also for

, especially when they work in strategic sectors. According to data collected by Statista in 2019, 63% of companies experienced some type of ransomware attack. In 2020, serious cyber attacks globally grew by 29% compared to the previous year: over half, 53%, had a "high" or "critical" impact while among the most affected targets - due to the

, according to data contained in

on cyber security, presented last March by the Italian Association for IT security.

The case also comes to the attention of Copasir, the

parliamentary committee for the security of the Republic

, with President Adolfo Urso explaining that he has asked the Dis for information and highlights how "the cyber attack on the Lazio Region, which also hit the system vaccination reservation, highlights how important it is to protect our infrastructures from new online threats and confirms the urgency of activating the cyber security agency to increase the country's resilience ".

Gabrielli: catching up with Acn

Franco Gabrielli, delegated authority of the Draghi government for security

, in an interview with Repubblica, talking about the National Cybersecurity Agency (Acn). "Two countries such as Germany and France have been endowed with a National Cybernetic Resilience Authority for a long time - says Gabrielli - Germany in 1991, France in 2009. We come out of breath for this 2021, with, says the Minister Colao,

95% of public administration servers are unreliable

and the prospect of 1 trillion active digital devices on the planet by 2030. We are already immersed in artificial intelligence and the digital dimension of things. That's why I say we have to run. And the birth of the Agency is the beginning of this race. "After the yes in the Chamber, in days, with the vote in the Senate, the National Cybersecurity Agency, distinct from intelligence, will become law of the State,