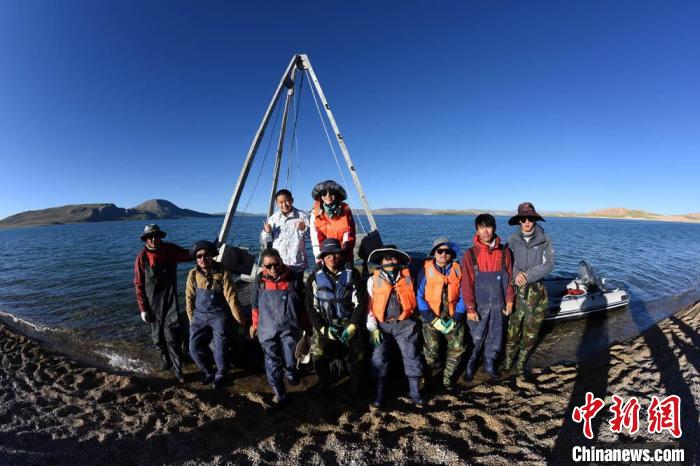 Chinanews.com, Shenzha County, Tibet, August 2 (Reporter Sun Zifa) China's second comprehensive scientific expedition to the Qinghai-Tibet Plateau (Second Qinghai-Tibetan scientific expedition) "Human Activity History and Its Influence" Scientific Expedition Team, July 31st to On August 1st, the scientific research operation of the lake Cohu in the plateau lake at an altitude of more than 4,500 meters in the Shenzha County of the Tibet Autonomous Region was successfully completed. The lake bottom long rock core and lake deposits were successfully collected through the lake drilling platform and gravity drill sampler and other scientific research equipment. It is estimated that the samples can be studied as far back as 40,000 years ago.

A primary school student from Liuzhou, Guangxi took a group photo with the expedition team before departure.

The scientific expedition team departed from Nima County on July 30 and arrived at the shore of Coe Lake in the afternoon. With the support of Shenzha County Natural Resources Bureau (Forestry and Grassland Bureau), it camped at the protection station set by the Bureau on the shore of the lake. Afterwards, the team members assembled and debugged lake drilling platforms, inflatable speedboats and other equipment to make full preparations for subsequent operations on the lake center.

The scientific expedition team showed the samples collected in the wrong Ehu expedition.

Researcher Hou Juzhi, the leader of the scientific expedition and the Institute of Qinghai-Tibet Plateau Research of the Chinese Academy of Sciences (Tibetan Plateau Institute of the Chinese Academy of Sciences), said that the two-day work period of Lake Cuohu was relatively calm and calm, which is the best lake condition so far in this scientific expedition. At one inspection site, after successfully collecting a 6-meter-long lake sediment core and a number of lake sediment samples at a water depth of about 30 meters on July 31, the team members went to another location with a shallower water depth on August 1. Under the scorching plateau sun and strong ultraviolet rays, a sediment core of about 8 meters in length was successfully collected.

He pointed out that these sediment core samples are expected to date back to 40,000 years ago, and can provide scientific data for studying the living environment of humans in the Cuo Lake and surrounding areas.

In addition, archaeologists have discovered a nearby Niardite Paleolithic site that is 30,000 to 40,000 years old in recent years. This scientific research on Lake Cuo E can provide information about how ancient humans entered the hinterland of the Qinghai-Tibet Plateau 40,000 years ago. Research on the history of ancient human activities on the Qinghai-Tibet Plateau and their impact provides more scientific data.

The starry sky of Co-E Lake was shining, and a meteor passed by.

On the night of camping on the shore of Lake Cuo E, Liuzhou, Guangxi brought a couple who was traveling by car with his son in the fifth grade of elementary school. They learned that the camp was a second-time Qing-Tibet scientific expedition team member. The child was very excited. Stop consulting scientific questions. Although the expedition team members are exhausted due to the tight schedule, they still patiently explain to children who love science and popularize scientific knowledge.

Before the lake the next morning, the expedition team also met the children's requirements and took a group photo in front of the lake drilling platform.

The child’s father said that he was fortunate to meet the Qinghai-Tibet scientific expedition team. He hoped that the child would cherish this special experience, learn more about the knowledge behind the textbook, and learn from the scientific research staff, including scientific expedition workers, who have made silent contributions to the development of national science and technology. Spirit.

The water of Lake Cuoe is clear and transparent.

It is understood that Lake Cuo is located to the south of Selin Cuo, the largest lake in the Tibet Autonomous Region. It was once connected with Selin Cu in ancient times. It was later divided due to local differences in the uplift of the Qinghai-Tibet Plateau and changes in water level. It is called the satellite lake of Selincuo.

The lake surface is about 4562 meters above sea level and the lake area is about 244 square kilometers. The lake water is classified as brackish freshwater lake according to the degree of mineralization. Due to the strengthening of the local ecological environment protection, the aquatic plants in the lake currently grow luxuriantly around the bird islands, and the lake water is clear and transparent. , Bird Island in the lake attracts many wild birds to gather.