At least three Russians died: what is known about a bus accident in Turkey

At least three people were killed in a bus accident in southern Turkey. This was reported by the press service of the Russian Ministry of Health. The department clarified that five more are in serious condition, two are in intensive care. Earlier in the company "Intourist" reported four dead. The accident occurred in the area of ​​the resort town of Manavgat. According to preliminary data, the bus driver who was heading to Antalya airport lost control. The car crossed the solid dividing line and then overturned. 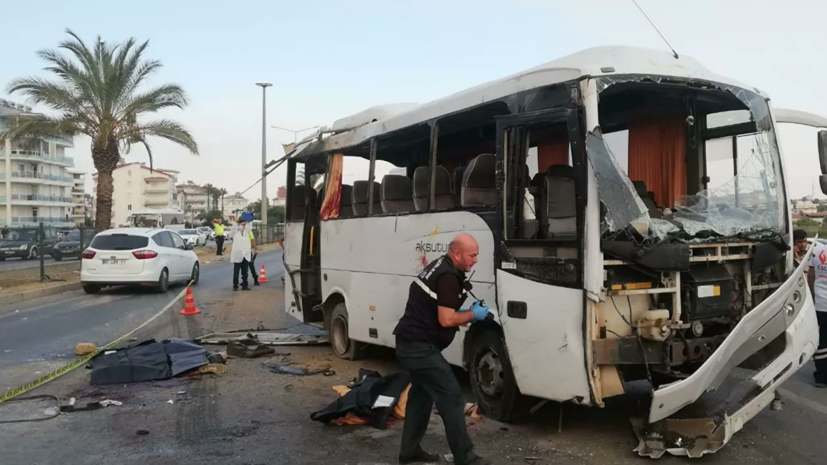 Three Russians were killed in an accident involving a tourist bus in southern Turkey.

Seven more people were injured, said the press service of the Russian Ministry of Health.

"At the moment, out of 22 people who were on the bus, three people have died, five people are in serious condition, and two more people are in intensive care," TASS reports.

The department said that they are monitoring the situation with the provision of medical assistance to Russian tourists.

Note that earlier it was reported about four deaths as a result of road accidents.

This, in particular, was reported by the tour operator "Intourist".

According to the Federal Tourism Agency, according to preliminary information from the police, the bus driver lost control.

The car crossed the dividing line and, finding itself in the oncoming lane, overturned.

To clarify the circumstances of the accident, an employee of the Russian Consulate General in Antalya went to the scene.

In addition, Rosturizm reports with reference to the tour operator that Russian-speaking guides are with all the victims in the hospitals.

It is noted that all tourists are insured by the RESO-guarantee company.

The Intourist company also said that there were nine children among the 22 passengers on the bus.

The bus transported a group of Russians from the village of Konakly to the airport, from where in the evening, local time, tourists were supposed to fly home to Samara.

As the tour operator specified, the group included only Russians from the Samara region.

As reported by the TASS agency with reference to the representatives of the company, Intourist is ready to promptly provide an opportunity to fly to Turkey to the relatives of the victims.

In April, another major accident occurred in Turkey, in which Russian tourists were injured.

One Russian woman died and 26 other citizens of the Russian Federation were injured as a result of an accident in Central Turkey on the Konya-Aksaray highway.

The accident happened on the morning of April 10.

The group was heading by bus for an excursion to Cappadocia.

On the published video from the scene of the accident, a bus was seen toppling over on a snow-covered roadside.

At the same time, passengers left the car through the broken windows.

According to information from Turkish law enforcement agencies, the bus driver lost control of the road on the icy road due to bad weather conditions.

The bus slid into a ditch and overturned.

A resident of Khakassia died in the accident.

Her husband accompanied her on the bus and needed hospitalization.

He said that the group of tourists was picked up from the hotel at about 3:00 local time, as a result of which many of the passengers on the bus were asleep at the beginning of the trip.

As the bus proceeded, visibility on the road worsened, as a result of which the driver had to stop several times.

According to the husband of the deceased woman, after the accidents, she was pinned down in the seat, despite the fact that the seat belts were fastened.

Other passengers tried to help free her, but she died.

We add that in the fall of 2020, two other accidents occurred in Turkey, involving Russian tourists.

So, in October in Antalya, a passenger car and a bus collided with Russians on the road in the opposite direction.

One person was injured in this incident.

Before that, in September, a bus carrying tourists had an accident in the Alanya region.

As a result of this incident, 11 were injured.

In addition, several other similar incidents also occurred in 2019.

In October, a tourist bus overturned in the Kumluca region of Antalya province.

The accident injured two Russians who were hospitalized in a state of moderate severity.

In September of the same year, a group of travelers heading from the hotel to Antalya airport had an accident near the village of Aksu.

22 tourists from the Russian Federation were injured, 11 were hospitalized.

In addition, in August 2019, an accident occurred with the participation of Russian tourists in Alanya.

The driver lost control on a mountain road.

As a result of the accident, six Russians were injured and needed hospitalization.

In June of the same year, two tourists from Russia, husband and wife, were killed in an accident in the Alanya region. They were run over by a car and died from their injuries; the perpetrator of the accident was detained.