"The world lacks strategic stability": how the situation has changed two years after the US withdrawal from the INF Treaty

Two years ago, the United States unilaterally withdrew from the Intermediate-Range Nuclear Forces Treaty (INF Treaty). The world still feels the negative consequences of this step, say analysts interviewed by RT. The de facto elimination of the agreement between the Soviet Union and the United States in 1987 threatened global strategic stability. However, political analysts believe that with the coming to power in the White House of the new administration headed by Joe Biden, the chances of resuming the dialogue have somewhat increased. 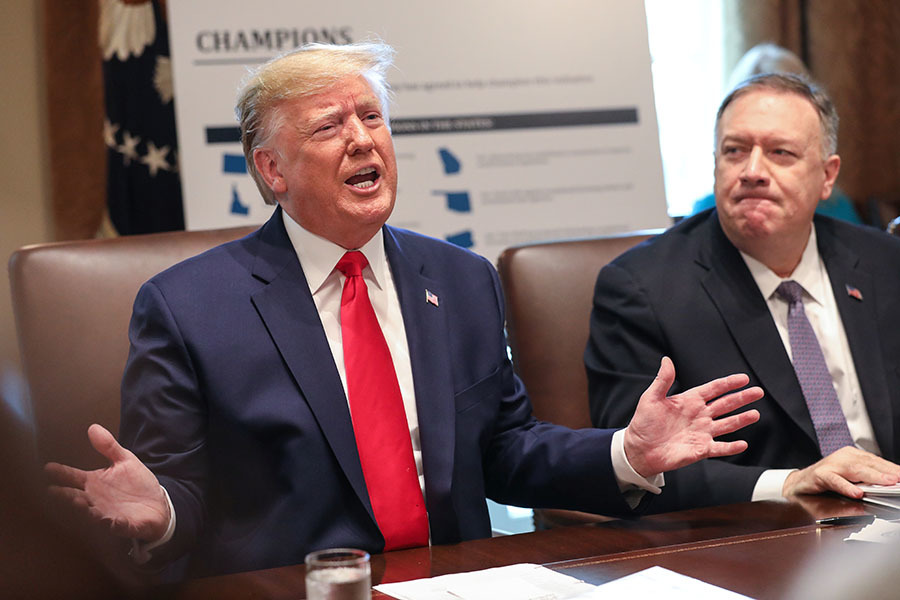 Two years have passed since the US withdrawn from the Treaty on the Elimination of Intermediate-Range and Shorter-Range Missiles (INF Treaty).

Experts note that this step by Washington, which led to the collapse of the agreement, has seriously shaken the foundations of the global system of strategic stability.

“We are now witnessing the negative consequences of this situation in the foreign policy field: undoubtedly, today the world lacks strategic stability.

The withdrawal of the United States from the INF Treaty destroyed the security system, which, in addition to Europe, was also present in Southeast Asia and the Asia-Pacific region.

The situation was also complicated by the fact that the United States began to negotiate with its weaker allies on the deployment of missile defense systems or launchers with short- and medium-range missiles on their territory, ”Alexander Mikhailov, head of the Bureau of Political-Military Analysis, explained in an interview with RT.

Recall that Moscow and Washington signed the Treaty on the Elimination of Intermediate-Range and Shorter-Range Missiles on December 8, 1987.

Then the USSR and the USA agreed to completely destroy ground-based missiles, the flight range of which was from 500 to 5.5 thousand km, and launchers.

The American side, in turn, got rid of the Pershing systems and ground versions of the Tomahawk cruise missile.

Despite the fact that the Russian Federation, as the legal successor of the USSR, has followed the terms of the treaty over the past decades, Washington regularly accused Moscow of violating it.

In 2014, US President Barack Obama sent a letter to Russian President Vladimir Putin, in which, for the first time at the level of heads of state, he accused the Russian side of non-compliance with the terms of the agreement.

Washington's unilateral withdrawal from the agreement has been discussed in the United States since 2017, and in 2018, statements about the intention of the American side to denounce the agreement began to come from high-ranking officials of the Donald Trump administration, including Secretary of State Mike Pompeo and then President's National Security Adviser John Bolton.

As a result, in 2018, Washington announced that it would leave the treaty because of the Russian 9M729 cruise missile, which, according to Washington, is supposedly capable of covering a distance of over 500 km.

On August 2, 2019, the United States unilaterally withdrew from the treaty.

It is worth noting that Donald Trump, as well as representatives of his administration, stated that the restoration of the INF Treaty was possible, but at the same time they set deliberately impracticable conditions: for example, the destruction by the Russian side of all samples of 9M729 missiles.

Another condition for the reanimation of the INF Treaty was the conversion of this agreement into a tripartite treaty with the participation of China.

Russia has repeatedly stated that it is unable to involve Beijing in this process, but Washington continued to insist on fulfilling this requirement.

After the US withdrew from the INF Treaty, Moscow offered European countries to join a voluntary moratorium on the deployment of intermediate and shorter-range missiles.

In turn, Vladimir Putin said that Russia would not deploy missiles covered by the INF Treaty in regions where similar American systems would not be deployed.

However, Moscow's initiative on a voluntary moratorium was rejected: NATO and European states said that it "does not inspire confidence."

Under the Trump administration, the fate of the Strategic Offensive Arms Treaty (START III), which was to end in February 2021, also remained uncertain.

In May 2020, Russian Deputy Foreign Minister Sergei Ryabkov stated that the White House intends to let the treaty expire.

The Russian diplomat then also said that "it is the US Republican Party that is at the head of efforts to destroy regimes and agreements in the field of arms control."

At the same time, Ryabkov noted the impossibility of connecting China to the treaty, which was again demanded by the American side.

The situation changed somewhat with the arrival of Democrat Joe Biden as the president of the United States.

Commenting on the approach of the new White House administration to the issue of maintaining strategic stability, analysts note that the US position in this area has become more balanced, despite the preservation of a confrontational general political course towards Moscow.

“The Biden administration agreed to extend the START III treaty, despite the fact that it was technically very difficult to do this, because there was very little time for consultations and prolongation of the treaty.

In general, the approach of the Biden administration is more balanced when compared with the position of the Trump administration, which, in fact, was only looking for various excuses not to make contact with Russia on these issues, "military expert Yuri Knutov emphasized in an interview with RT ...

It is worth recalling that Joe Biden, as a senator, personally participated in the creation of the INF Treaty in the 1980s and even visited the USSR several times as part of the American delegation for consultations on this issue.

Despite the extension of START III, the Democrat did not revise Trump's decision to withdraw Washington from another agreement - the Open Skies Treaty.

At the end of May this year, the American side informed the Russian Foreign Ministry that it did not intend to return to this agreement.

Moscow later noted that without the participation of the United States and Russia, the DON loses its viability, despite the desire of other participants (for example, Germany, for example) to preserve its effect.

Yuri Knutov notes that, despite the desire of the Biden administration to preserve the functionality of the strategic arms control system, which was established after the Cold War, there are forces in the United States that want to remove all restrictions on this issue.

“From a legal point of view, Biden could not take and simply cancel the decision on the INF Treaty.

At the same time, the United States could still return to the Open Skies Treaty, but under the pressure of the aggressive republican lobby, Biden did not dare to do so, although he, as a politician formed during the Cold War, was well aware of the possible threats of unleashing a third world nuclear war that arose in different times, ”the expert says.

In June, the American media, citing sources in the US and EU Senate, reported that NATO countries, following the summit of the alliance in Brussels, could allegedly announce that they were opposed to the deployment of ground-based nuclear missiles in Europe.

Defense News, which disseminated this information, noted that NATO is considering such a step as a way to reduce tensions with Russia in advance of the meeting between Joe Biden and Vladimir Putin, which took place on June 16 in Geneva.

However, following the summit, the leaders of the NATO countries made the opposite statement - that they did not consider Moscow's proposal on a moratorium on the deployment of intermediate and shorter-range missiles in Europe after the termination of the INF Treaty.

“Russia's proposal for a moratorium on the deployment of medium-range missiles in Europe runs counter to Russia's unilateral and ongoing deployment of such systems on this continent and would not prevent Russia from building up the potential of such missiles outside its European territory;

therefore, this proposal does not inspire confidence and is not acceptable, ”the final document said.

At the same time, Russian Deputy Foreign Minister Sergei Ryabkov stated on July 29 that the US position on the moratorium on the deployment of intermediate and shorter-range missiles has not changed and that they are not ready to discuss this topic substantively.

This statement was made shortly after the start of negotiations with US representatives in Geneva.

“In my understanding, their approach to this proposal of ours boils down to the fact that we are trying to divert the discussion aside, that the root of the problem is still the alleged violation by Russia of a now defunct treaty.

Ryabkov added that when such missile systems appear in Europe, Russia will have to react to this "and react firmly, convincingly, with military-technical measures."

“This will lead to a weakening of European security, unambiguously, and the security of the United States.

Why do they need this, I do not understand.

We urge them to come to an agreement before it is too late, ”the diplomat emphasized.

Despite this, Joe Biden said he looked with hope at the talks between Moscow and Washington on strategic stability.

“They are in the process.

And I have hopes, ”the US President told reporters.

From the point of view of Yuri Knutov, ultimately Russia and the United States will be able to overcome their differences, since these issues are of great importance for the security of the whole world.

“After the meeting between Biden and Putin, it was decided to create working groups that will deal with issues of strategic stability.

Despite the fact that there are many blank spots, these negotiations will help to find common points and move towards de-escalation of tension, ”the expert predicts.

This opinion is shared by Alexander Mikhailov.

“Today, Russia and the United States, as the largest nuclear powers, need to talk with each other about collective security at the global level, because the protracted bilateral foreign policy multifaceted conflict at some point, due to problems with certain politicians, could well have taken the form of a hot or even nuclear conflict. I think the United States will still revise the old agreements, including proposing to include new types of weapons in them, after which, together with Russia, they will return to mutual arms control, ”Mikhailov summed up.