Tokyo2020. Tamberi and Jacobs win gold. The hug on the track, blue with the Tricolore

Italian the fastest man in the world: "It was my dream as a child, I ran as hard as I could". Tamberi ex aequo in the high jump with Barshim from Qatar 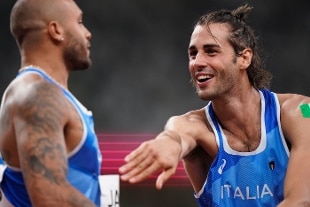 The two Azzurri both celebrated with the Italian flag on their backs.

Jacobs gold in the 100 meters, Italian fastest man in the world

fastest man in the world

is Italian. The gold won by Marcell Jacobs in the 100 meters in 9 '' 80 enters the myth of blue sport: no Italian in the 125 years of the Olympics had never even participated in the final of the 100. "I can't wait to hear the anthem tomorrow. "of Mameli, he said commented," it was my dream as a child: I ran as much as I could. "

Gianmarco Tamberi and Olympic champion in high jump. A gold in co-ownership with Mutaz Essa Barshim of Qatar because they both jumped 2.37 meters and missed 2.39 meters. For the blue this is the first Olympic medal after an extraordinary match. Gimbo brought part of the pinstripe knee-high to the platform to commemorate his absence from the Rio de Janeiro edition. A few days before the Olympics he had fractured his foot during the Monte Carlo race where he set the Italian record of 2.39.