The United States and Britain are now backing Israel and pointing out Iran as responsible for the deadly attack on a ship off Oman on Thursday. At the same time, Iran denies involvement in the attack and describes the accusations as unfounded. 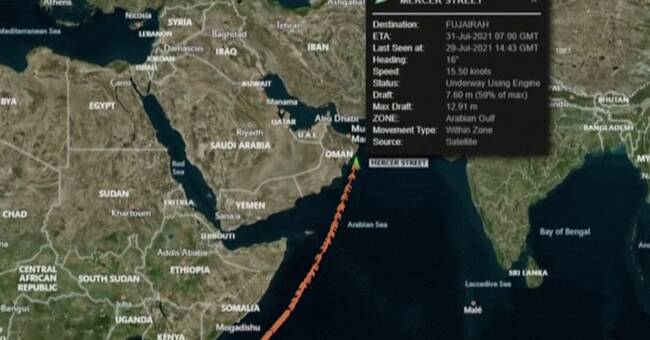 This after Thursday's attack on a ship from an Israeli-owned shipping company where two people lost their lives.

The United States stands behind

Now both the United States and Britain stand behind Israel and point out Iran as responsible for Thursday's attack.

On Sunday, US Secretary of State Antony Blinken said that the country is convinced that Iran carried out the attack, reports Reuters.

Britain has also commented on the attack.

"We believe that this attack was deliberate, targeted and a clear violation of international law by Iran," British Foreign Secretary Dominic Raab said on Sunday.

At the same time, Iran denies involvement in Thursday's attack and describes the accusations as unfounded.

Iran was not involved in the attack, said Saeed Khatibzadeh, a spokesman for the Iranian Foreign Ministry on Sunday, reports TT.

The ship Mercer Street is Japanese-owned but operated by the Israeli-owned shipping company Zodiac Maritime. According to the company, the ship was on its way from Dar es Salaam in Tanzania to Fujariah in the United Arab Emirates. After the attack, a US naval card protected the damaged ship, according to the shipping company. On Saturday, the US State Department announced that the United States will assist in the investigation.