SVT's meteorologist about the July weather

Rainfall and floods in southern Sweden. 119 rescue efforts for forest fires in the northernmost counties - in just seven days. The July weather has been varied and several Swedish records have been broken during the month. - What I think has stuck out the most in July is the heat, says SVT's meteorologist Per Stenborg. 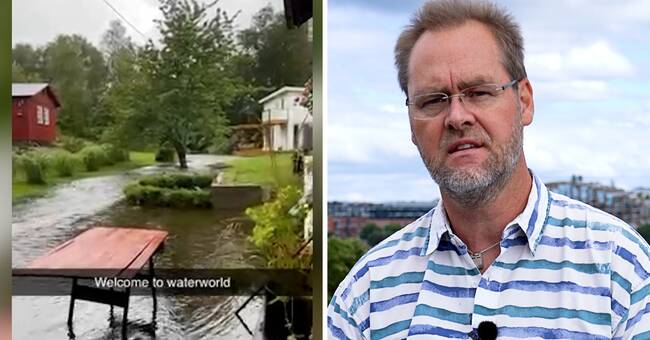 Heavy rainstorms hit the southern parts of Sweden at the end of July.

In Bohuslän, large amounts of rain were measured which led to floods.

In Kungshamn, a family was forced to flee in panic from a campsite filled with water.

In Kristianstad, a water pipe burst at a hospital after extreme rainfall.

- There has been a lot of thunder in July.

Hail, tornadoes and other phenomena have also been reported, says meteorologist Per Stenborg.

At the same time, forest fires have ravaged when flames spread over dry land up north.

Two of Sweden's four fire planes have been moved to Umeå due to the high fire risk in the area.

Both a fire ban and a water ban have prevailed in both the north and the south due to drought.

In the middle of it all, several tropical nights, when the temperature never drops below 20 degrees, have been measured.

In early June, SMHI warned of high heat in 32 of the country's 40 weather districts - with temperatures of around 30 degrees.

Hear SVT's meteorologist Per Stenborg answer three questions about the July weather - and explain how everything is connected - in the video above.