Comment: Were you wondering about the end of the high jump? It’s hard to criticize the rule change when you saw what happened at the Tokyo Olympic Stadium

The men’s high jump Olympic gold in Tokyo was awarded. This was made possible by the change in the rules, explains Lauri Hollo, IS's Olympic expert. 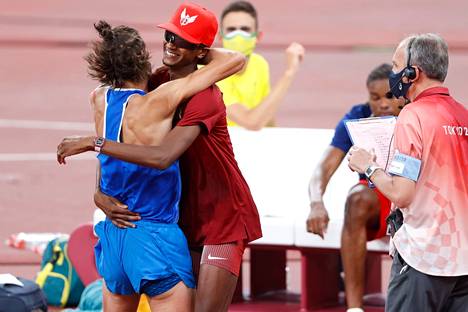 Qaz’s Mutaz Essa Barshim and Italy’s Gianmarco Tamberi ended up in the Tokyo height final with their tismat the same result with their 237 tismales with the same protocol.

It would have been possible to continue the race, but the apparently good friends slapped their hands on and both set off the Olympic gold medal.

Both crossed all heights at first to height 237.

There were no more 239 left for either.

Even in recent years, such a situation led to a recurrence as automation, where the height is reduced and the winner is decided.

Ten years ago, the rule changed so that athletes in a tie can decide among themselves that the championship will be split.

Very often this has not been the case.

Suddenly, only the World Cup halls in Sopot, Poland, come to mind in 2014. At that time, Maria Kuchina of Russia and Kamila Licwinko of Poland decided to share the championship of height in fused harmony.

Both exceeded 200 and the record was exactly the same.

202 no longer went from either.

The 200 also surpassed Ruth Beit of Spain, but she only surpassed the 200 in the second when the top two did so with their first jumps.

Would it be fairer to still require repetition?

On the other hand, it is great that two athletes were now able to enjoy Olympic winner status;

the same could be done for running trips if the thousandths of a second are the same.

Many also believe that there can be only one champion.

The problem with remaking is that it has often been quite flat.

When the bar is lowered - perhaps more than once - the game goes to quite an adjustment.

On the other hand, this way you can find out which one is the better jumper on the crucial day.

I guess that's the purpose of the competitions.

But when you saw the immense joy of both Barshim and especially Tamber after the draw, it is very difficult to go on an emotional level to criticize this rule.

The blood enemies would have done otherwise, now two friends slapped their hands on, which gave many people a good mood.

Not a bad solution either.