A sit-in in the ring .. A rare protest by a French boxer at the Tokyo Olympics

French boxer Murat Aliyev protested violently against his exclusion from the super heavyweight boxing competitions in the Tokyo Olympics, rejecting the referee's decision and accusing him of committing a violation. 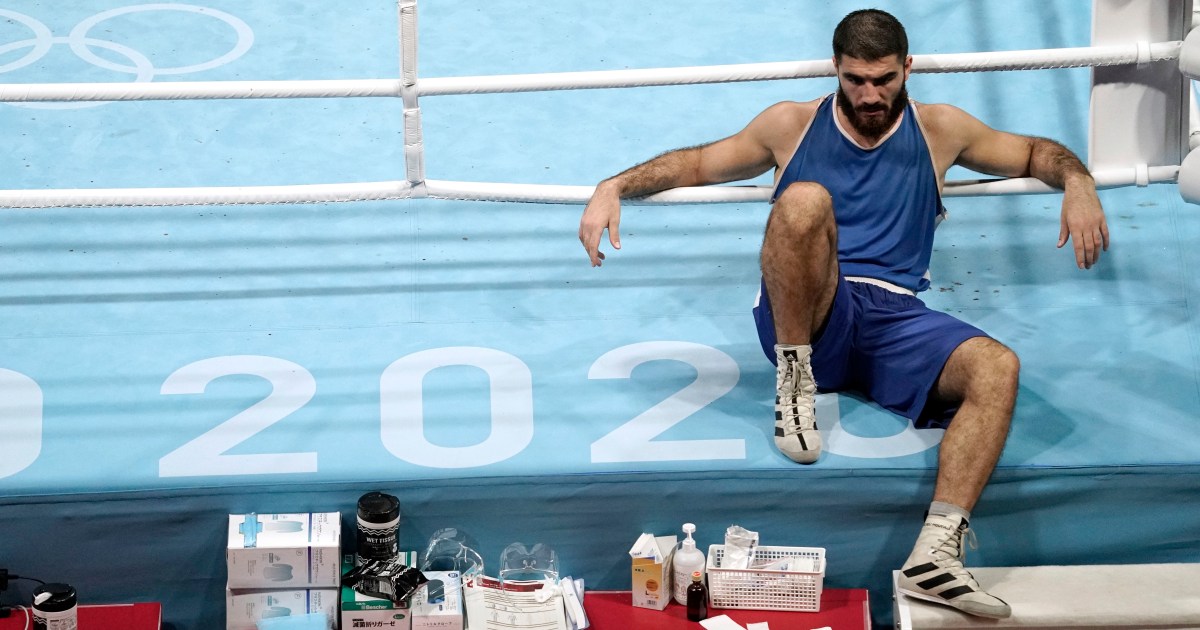 French boxer Murat Aliyev was sitting outside the ring for about an hour after he was excluded from a super heavyweight bout at the Tokyo Olympics on Sunday.

Aliyev finished the first round 3-2 ahead, and the referee stopped his fight with Britain's Fraser Clark 4 seconds before the end of the second round.

Aliyev angrily threw his mouthguard into the empty stands, punched the television camera and then argued with Clark before sitting on the steps of the track in protest.

Aliyev remained at the ringside for half an hour, then left the hall after a conversation with officials, before returning a quarter of an hour later.

"It's unfair, I was ahead of the fight," Aliyev, 26, told reporters. "(The referee) stopped the fight without warning and they told me I lost, so I think what happened was deliberate."

"All my life I've been preparing for this event, so it was only natural for me to go crazy," he added.

The fight ended in the quarter-finals to secure Clark's bronze, and the British boxer said he sympathized with his French counterpart and advised him to "avoid tainting his reputation".

"It felt like there were two headshots, but I don't know if that was intentional or not," Clark said. "I'm not going to stand here and say he did it on purpose because I'm sure he wouldn't want to end his Olympics like that."

"I've been in situations like this before. You usually stop thinking and express your feelings, he's a good boxer... I didn't want him to tarnish his reputation or be rude to referees or officials because they are just doing their job. I was trying to give advice from an older, more experienced boxer." ".

Mourad Aliev of France, the fourth seed, refuses to leave the ring after being disqualified for an apparent headbutt in the 91kg QF.

Aliev, who dominated the bout throughout, spat out his mouth gear in disgust when the ref called the bout.#Olympics |

"These things happen, I have been disappointed many times in my career and faced many ups and downs. This is a disappointment for him, I know him and he is a good person, I believe he will be a hero."

Aliyev's protest did not reach the dramatic extent of the protest of South Korean Byun Young Il, who sat in the middle of the ring for 67 minutes after losing a fight in the 1988 Olympics, as the start of the rest of the competitions was postponed to more than an hour.